In FX markets, the Euro, Norwegian Krone and Swedish Krona largely outperformed, while the New Zealand Dollar slid lower against its major counterparts. Gold and silver prices nudged marginally higher while platinum stormed to a 6-year high on the back of tight supplies and investment demand. Looking ahead, US inflation figures for January headline the economic docket alongside a speech from Federal Reserve Chair Jerome Powell.

Progress on fiscal stimulus negotiations, in tandem with the Federal Reserve’s relatively dovish stance, may trigger further losses for the US Dollar against its major counterparts in the short term. As mentioned in previous reports, Democrats in both the House and Senate filed joint budget resolutions that will allow President Biden to pass the majority of his proposed $1.9 trillion package with a simple majority – in a process called reconciliation.

Indeed, White House Press Secretary Jen Psaki stated that “the most likely path at this point is through a reconciliation process”. This comes as Republicans push back on the President’s proposal, citing that the economy’s output gap in the fourth quarter of 2020 was a shortfall of $665 billion. Biden’s package is almost triple that amount.

Nevertheless, it doesn’t appear that the President will give in to his Republican counterparts concerns, stating that “if I have to choose between getting help right now to Americans who are hurting so badly and getting bogged down in a lengthy negotiation or compromising on a bill, that’s an easy choice. I’m going to help the American people who are hurting now”. The impending delivery of a substantial fiscal support package will likely limit the Greenback’s potential upside. 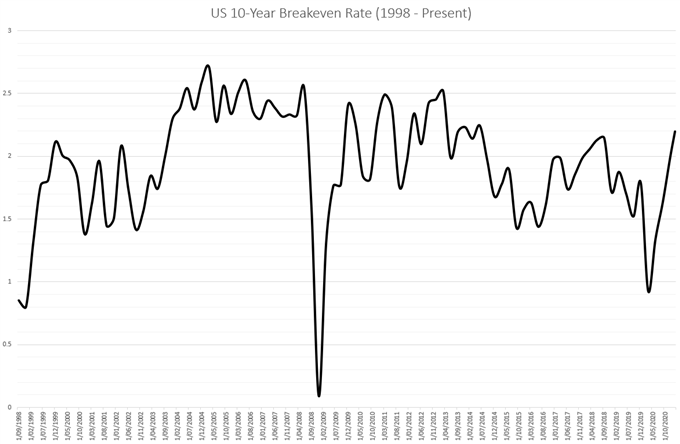 Attention now turns to upcoming consumer price growth figures, as the notable pickup in inflation expectations fuels bets that the Federal Reserve may tighten its monetary policy levers sooner than expected. The 10-year Breakeven Rate has surged past 2% in recent days to climb to its highest levels since 2014.

However, several Fed members have talked down the idea of tapering bond purchases anytime soon, with Chairman Jerome Powell stating that “the whole focus on exit is premature” and St Louis Fed President James Bullard commenting that “we are still in the middle of a crisis, so it’s too early to initiate that discussion”.

With that in mind, the US Dollar could come under pressure against its risk-sensitive counterparts if upcoming inflation data fails to surprise to the upside. That being said, the Greenback may rebound higher against the Japanese Yen in the short term if Treasury yields continue to gain ground. 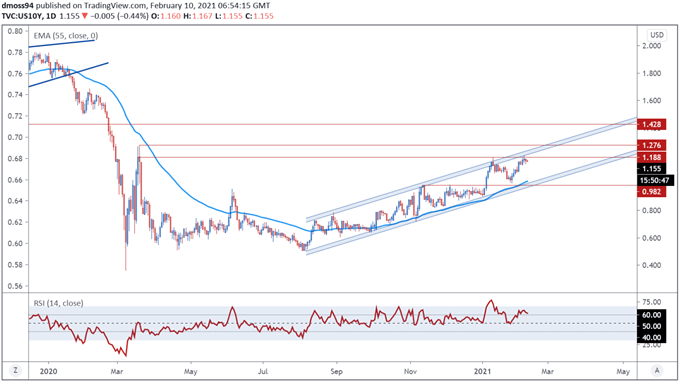 From a technical perspective, yields on US 10-Year Treasuries look poised to extend recent gains, as rates continue to track within the confines of an Ascending Channel.

With yields tracking firmly above the 55-day moving average, and the RSI hovering above 60 in bullish territory, the path of least resistance seems higher.

Clearing resistance at 1.20 would probably clear a path for rates to probe the March 2020 high (1.28) and likely result in further gains for the USD/JPY exchange rate.

On the other hand, failing to hurdle the psychologically pivotal 1.20 mark could trigger a pullback towards channel support and the 55-MA (1.01). This would probably coincide with a marked selloff in USD/JPY rates. 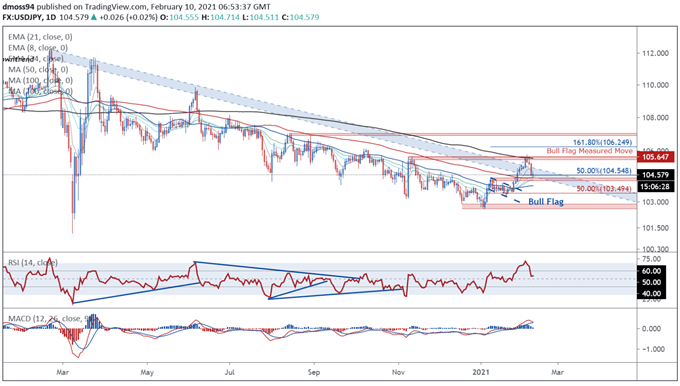 USD/JPY rates have slipped lower in the last few days, after the formation of a Shooting Star reversal candle at the sentiment-defining 200-MA (105.56) triggered a pullback to the 50% Fibonacci (104.55).

Indeed, the development of both the MACD and RSI hint at further upside, as both oscillators hover comfortably above their respective neutral midpoints.

Alternatively, a daily close back below range support could pave the way for sellers to drive the exchange rate back towards the trend-defining 50-MA (103.94). 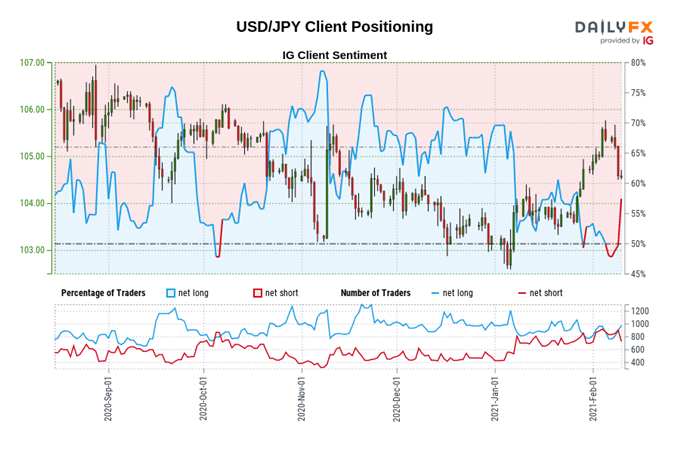 We typically take a contrarian view to crowd sentiment, and the fact traders are net-long suggests USD/JPY prices may continue to fall.

Traders are further net-long than yesterday and last week, and the combination of current sentiment and recent changes gives us a stronger USD/JPY-bearish contrarian trading bias.