This is the last article that I will publish on the large-cap airline space before the start of the earnings season. So far, I have unveiled my preference for Southwest (LUV) and Alaska Air (ALK), due to the relatively safer bet that I believe both represent, while also maintaining my “sell” rating on American Airlines (AAL).

In the middle of the pack, not offering a clear bullish or bearish opportunity, is United Airlines (UAL). I believe the company is better positioned to survive the COVID-19 crisis and eventually thrive than peer American, for example. However, heavier exposure to international travel and the stock’s wild behavior as of late are enough to keep me at arm’s length from UAL.

Growth has been left behind

Once upon a time, United Airlines was the growth story among legacy carriers. In September 2018, when I released the first airline sector study to my Storm-Resistant Growth community, the airline’s traffic and capacity metrics had been increasing about twice as fast as those of peers Delta (DAL) and American. By mid-2019, United was still managing to keep up the growth pace while pushing PRASM (per-unit revenue, the lowest among the full-service airlines) higher and keeping CASM (per-unit cost) under control.

But the bottom has since fallen off. The current year will be nothing like 2019, as I believe airline traffic should be slashed by at least 75% YoY in the second quarter. As the global economy approaches a period of deep recession, talking about growth and occupancy improvement has given way to discussions about how airlines will remain solvent in the current environment. United, for example, has reported to be losing $100 million in revenues per day, and the end of the company’s troubles seem to be out of sight. 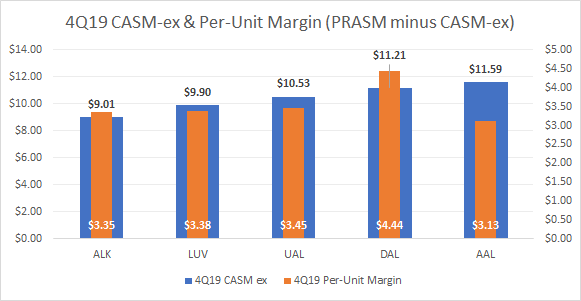 To combat the headwinds, United can count on a less bloated cost structure compared to those of Delta and American (see chart above). As a result, the impact of little revenues to United’s bottom line could be less severe than it might be for a company like American. Also, United has managed to decrease its debt load and pension obligations over the past couple of years, although it remains the second most leveraged company in the US airline sector (net debt-to-asset of 18.3%).

Regarding the investment opportunity, it helps that UAL trades at the lowest trailing P/E multiple in the industry: 2.4x. The stock has also suffered the most recently, down 70% from 2020 peak levels. But UAL’s price has also been the most erratic and unpredictable, as the chart below depicts. The beta to U.S. Global Jets ETF (JETS), which represents the stock’s sensitivity to price movements in the sector, has been the highest so far in 2020.

As far as I am concerned, volatility is the last thing that I’d be seeking in a riskier-than-average sector amid times of economic uncertainty. 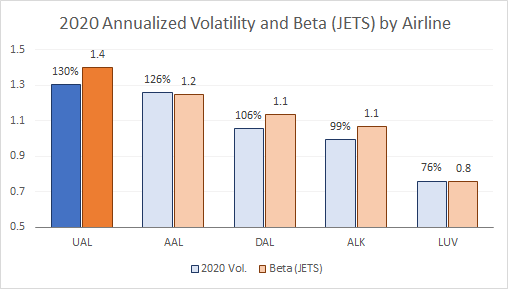 Once pluses and minuses are netted out, I conclude that United might be neither the best nor the worst bet in the airlines sector. The company’s fundamentals seem to be decent for a legacy carrier, but they are not as good as those of less levered, more domestic-centric names like Southwest and Alaska Air.

UAL may appeal to shorter-term traders, given the upside potential that a high-beta and high-volatility stock provides. On my end, I choose to take a pass here and avoid further turbulence in an already turbulent market.

Disclosure: I am/we are long LUV. I wrote this article myself, and it expresses my own opinions. I am not receiving compensation for it (other than from Seeking Alpha). I have no business relationship with any company whose stock is mentioned in this article.