The merchant refining sector has staged a relief rally in recent weeks as investors have responded positively to early reports that efforts to “flatten the curve” in major U.S. COVID-19 hot zones have been successful. The share prices of CVR Energy (CVI), Delek US Holdings (DK), HollyFrontier (HFC), Marathon Petroleum (MPC), PBF Energy (PBF), Phillips 66 (PSX), and Valero Energy (VLO) have all broadly outperformed that of the S&P 500 index in recent trading sessions (see figure). PBF Energy, which has had its balance sheet’s health called into question by the advent of widespread social distancing measures in the U.S., has led the sector with a 36% share price increase since April 3. Even the sector’s worst performers since then have outperformed the S&P 500 by an almost 2:1 margin, however.

As I wrote earlier this week, U.S. gasoline demand has been severely reduced in recent weeks as the large majority of Americans have found themselves canceling their daily commutes and vacations in response to stay-at-home orders. Gasoline is the sector’s largest product by volume, and many refiners have responded to this collapse in demand by reducing crude throughput volumes at their refineries. Finished gasoline production at the end of March was 24% lower than in the same week of 2019 due to the demand destruction that has resulted from social distancing, for example, and both numbers have declined further since then. Gasoline demand is currently well below even the lowest prior volume in the U.S. Energy Information Administration’s (EIA) 30-year dataset (see figure). 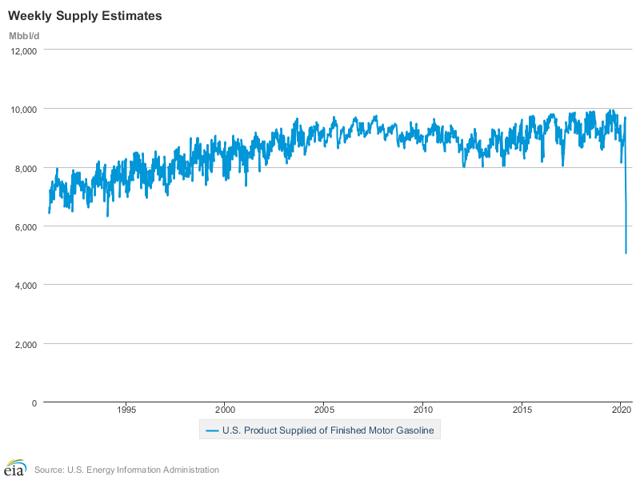 U.S. gasoline stocks are rising rapidly at a time when they are normally being drawn down in preparation for the summer driving season (see figure). The only reason that stocks are not currently at all-time highs is because of the aforementioned decline to production. At 34 days of supply, though, the U.S. has more gasoline stored relative to consumption than at any other point since February 1993. 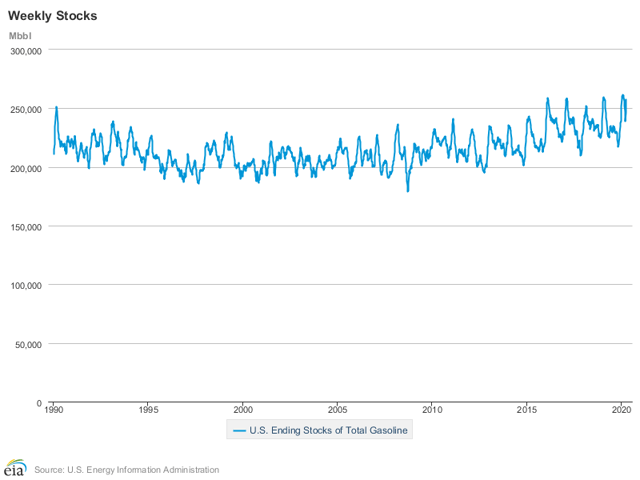 The cause of the current refining rally is recent evidence that the growth rate of new COVID-19 cases in the U.S. is close to peaking, if it has not done so already. More importantly, a peak at current levels would mean that the curve has been flattened sufficiently to prevent hospitals from being overwhelmed, sparing U.S. doctors from having to make the type of medical triage decisions that were reported in Italy. This has in turn led to rising expectations that U.S. social distancing measures will be relaxed, possibly as early as May. From the perspective of gasoline demand, the lifting of these measures would see Americans at least partially return to their former consumption habits.

The good news for Americans is that these social distancing measures have worked. This has saved, at least temporarily, literally millions of lives in the U.S. alone, based on earlier estimates that up to 2.2 million Americans would be killed by the pandemic. This good news is bearish for gasoline demand, however, since it suggests that any relaxing of U.S. social distancing measures will be temporary. Why? Because the effectiveness of social distancing has ensured that most Americans have not yet been exposed to the coronavirus and, by extension, still do not have natural immunity as a result.

This lack of immunity, which will persist until either (1) the coronavirus has worked its way through most of the population or (2) most Americans are vaccinated, makes it possible that any widespread relaxation of social distancing measures would simply return the country to the spot on the curve that it was at in late February. At that point social distancing measures would potentially need to be re-implemented. As one senior epidemiologist recently wrote in The New York Times, “we need to hit and release the brakes on [social] distancing, again and again, until we safely get to immunity.” The description of the situation that another senior researcher gave to CNN is worth quoting in full:

I think we don’t yet have enough data from this outbreak to necessarily know when it will be safe to roll back social distancing. I think we’re all very carefully following the news out of China that there’s some locations where they’re beginning to roll back some aspects of the social distancing policies that have been implemented. But I think a relatively small minority of the entire population will end up having been exposed and potentially developing immunity, that there’s going to be a very large pool of people with no immunity after this first wave.

This raises the prospect that gasoline demand throughout the rest of 2020 will be extremely volatile, rebounding sharply when social distancing measures ease but then collapsing again when the virus inevitably responds by resuming its climb up the infection curve. This week’s EIA Short-Term Energy Outlook is beginning to adopt such a scenario as its baseline. The EIA now expects monthly U.S. gasoline demand to peak in August at 9.1 MMbpd, or 7% lower than the average 2016-2020 August volume of 9.8 MMbpd (see figure). Just in the last month the EIA has reduced its forecast of U.S. gasoline demand in H2 2020 by over 5%. 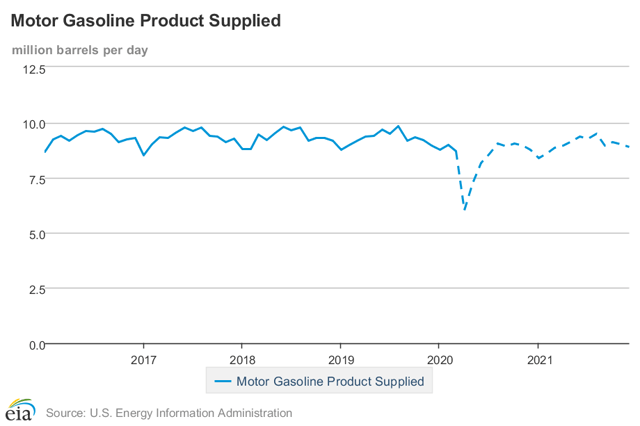 Notably, though, the EIA’s latest forecast still assumes that U.S. social distancing measures will begin to relax by early Q3, with gasoline demand approaching historical levels in Q4. It is important for investors to recognize, therefore, that there is substantially more downside than upside risk to this forecast given the growing probability that widespread social distancing measures will need to be implemented on a recurring basis until a vaccine becomes available sometime in 2021.

Scientists are even skeptical that warmer summer weather will do much to slow the spread of COVID-19. While some studies have found that the virus does not spread as rapidly under warm, humid conditions, a recent letter from the U.S. National Academies of Sciences to the White House concluded that the weather was a moot point since so few Americans have immunity at this stage. Until Americans develop herd immunity against the coronavirus either naturally or via a mass vaccination program, in other words, any ending of social distancing measures is likely to cause COVID-19 to resume its spread.

The Trump administration is eager to end social distancing and re-open the economy. Even if the federal government’s guidelines recommend a relaxation of social distancing measures after their current expiration date of April 30, however, this would not necessarily prevent a second gasoline demand decline later in the year. At this point the federal government’s recommendations have been just that: guidelines rather than mandates. The actual legal restrictions on social interactions have been implemented by state and local governments. While many of these governments’ decisions have no doubt been informed by the White House’s guidelines, policymakers of large states such as California and New York have generally taken action weeks before those guidelines recommended that they do so. It is the country’s major population centers that will drive demand for gasoline (or a lack thereof).

I have no medical training and do not pretend to have any special insight into how the COVID-19 pandemic will progress as 2020 continues. That said, investors should be aware that medical specialists expect COVID-19 to remain active in the U.S. community for several months to come, and that this may result in a scenario in which gasoline demand collapses again later in 2020 relative to historical volumes. Merchant refiners are already struggling with the gasoline glut that has developed in recent weeks, and at least one, Marathon Petroleum, has announced plans to completely idle one of its smaller refineries. A second decline to gasoline demand would represent a “worst case” scenario for many refiners as a result. Unfortunately for them and their investors, this is exactly what many medical modelers now expect may happen.

Disclosure: I am/we are long DK, VLO. I wrote this article myself, and it expresses my own opinions. I am not receiving compensation for it (other than from Seeking Alpha). I have no business relationship with any company whose stock is mentioned in this article.

jetcityimage/iStock Editorial via Getty Images Introduction I have to say that I was very excited to write this article. While I do not own Marathon Petroleum Corporation (NYSE:MPC), I do own its peer Valero Energy […]

Petmal Thesis Renewable stocks have been in the rage recently, given the successful passage of the climate and tax package, with Plug Power Inc. (NASDAQ:PLUG) among the key beneficiaries. The bill could unlock $370B in […]