These are scary times to consider investing in airlines. Even the Oracle of Omaha Warren Buffett himself seems to have thrown in the towel on the sector to an extent. Needless to say, buying airline stocks today is a highly risky proposition, and high levels of volatility should be reasonably expected.

But then, of course, there is the flip side of the argument. Should the COVID-19 crisis ease or turn out to be less disruptive to business than expected, riskier names are the most likely to bounce back the fastest. Also, forget predicting what will happen in the future, I would argue that a properly diversified growth portfolio should own at least one airline name, provided the position size is reasonable and consistent with the investor’s risk profile.

Today, I start looking more closely at the space and draw a few conclusions about which airline stocks might be worth buying at current prices.

A word on the methodology

There are a few ways that one can go about assessing the airline sector. I did a similar exercise back in September 2018 and shared the study in detail with my Storm-Resistant Growth community. Back then, I concluded that Delta Air Lines (DAL) and Southwest Airlines (LUV) deserved a Buy rating from me, while American Airlines (AAL) and Spirit Airlines (SAVE) seemed to be the least appealing stocks to own.

The chart below illustrates how a hypothetical $1,000 long-short portfolio of DAL and LUV on one side and AAL and SAVE on the other would have performed since I published the 2018 study – for simplicity, I ignore trading and borrowing costs. Judging by the results below, there is a chance that, aside from sheer luck, the methodology that I have used for picking winners versus losers may hold some water. 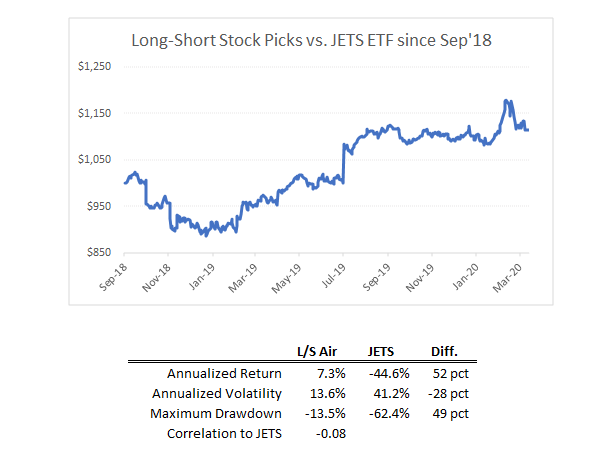 This time, I will take a similar approach, which includes looking closely at the following factors: balance sheet robustness, ability to produce cash flow consistently, per-unit economics (i.e., revenue and cost per unit of capacity) and, to a lesser extent, valuation. The difference this time is that I will lean even more heavily towards being conservative rather than aggressive, considering the challenges that lay ahead for the airline sector.

Today, I start the discussion with Southwest, my top pick in the space.

As conservative as it gets

From an operations perspective, Southwest has just come off a rough 2019 that was marked by the Boeing (BA) 737 MAX drama. With a good chunk of its fleet grounded, the airline had to quickly adjust to an environment of lower seat capacity and substantially higher per-unit costs (measured by CASM ex-fuel) to an extent that no other airline in the world had to face.

Interestingly, Southwest seems to have done a superb job at navigating the choppy air. Case in point, the airline has remained the only among the top 5 players by market cap, which also include Delta, United Airlines Holdings (UAL), American Airlines and Alaska Air Group (ALK), to consistently produce positive free cash flow every single quarter since 2016 at least. That was the case despite a drop in capacity and traffic of about 1% in 2019, and an increase in CASM of over 8%. 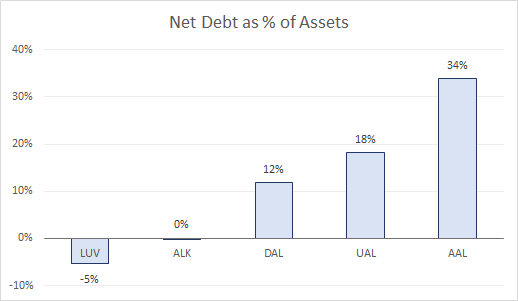 Southwest came out of a challenging year in even better financial footing. The company’s net cash position (cash minus debt), which had been hovering around zero in early 2018, improved to $1.4 billion in 4Q19. A tightening in capital expenditures seems to have helped quite a bit, proving that Southwest can play defense well when necessary.

As a result, the airline has maintained its position as the most liquid within the top 5 peer group going into the current crisis (see chart above, and keep in mind that negative net debt is equivalent to a positive net cash balance). I believe the challenging 2019 environment has “toughened up” Southwest and put it in a better position to compete. Now that the 737 MAX woes have taken a back seat, investors may start looking at Southwest and its robust balance sheet with even better eyes.

Consistent with the idea of investing in the airline sector from a more conservative angle, a few factors that attracted me to LUV 18 months ago continue to be at play today. For example, the company’s fuel hedging policy has been instrumental in ensuring that Southwest’s fuel cost be the most stable and predictable in the sector. See chart below.

To be fair, an argument could be made that the upcoming global recession will keep a lid on crude oil prices, which should benefit airlines that allow fuel costs to fluctuate. But again, I am much more interested in predictability when it comes to investing in a riskier-than-average sector, not in anticipating favorable moves in the cost base. Notice below how Southwest’s per-gallon fuel cost over the past 16 quarters has fluctuated at one standard deviation of only 13 cents. 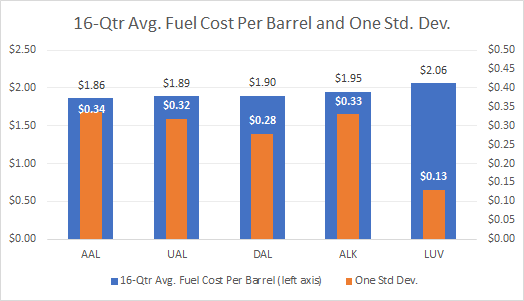 Lastly, I have learned to appreciate Southwest’s per-unit margin profile, the second best across the whole group of full-service and low-cost airlines. To be fair, the current environment of deep discounting and last year’s MAX problems may throw off the key profitability metrics for a while. But over the longer term, I believe Southwest will continue to command significantly higher-than-average margins per unit of capacity.

Perhaps the best bearish argument on LUV is valuation. The stock is the only one in the sector, by a long stretch, to still trade at a trailing P/E in the high single digits. By comparison, shares of its three full-service peers trade at an average earnings multiple of only 2.5x. From peak to trough (see chart below), LUV has given up the least in market value, even though it was still the most richly valued name in the sector back in February 2020.

But to me, LUV is expensive for a very good set of reasons. The company’s balance sheet is pristine, and Boeing’s MAX issues have suddenly become less of a concern. Southwest’s largely domestic-only business shields it a bit against eventual border shutdowns that might be needed to protect the US against future virus outbreaks. In addition, its consistency of cash generation, even during periods of distress, is commendable.

For these reasons, I reinforce my conviction that LUV will likely be the best airline stock to hold, relative to other alternatives in the sector, for the next 12-24 months at least.

Disclosure: I am/we are long LUV. I wrote this article myself, and it expresses my own opinions. I am not receiving compensation for it (other than from Seeking Alpha). I have no business relationship with any company whose stock is mentioned in this article.