In the absence of significant scheduled risk events this week, sterling could fall back in line with its historical performance for the month of April, shown in the heatmap below. Using GBP/USD data from the beginning of 2010 until now, April emerges as cables strongest month followed immediately by May, the worst month on average. On average, since 2010 the pound appreciated by 1.39% for April while May saw a depreciation vs the dollar of 1.80%.

Should history repeat itself, cable is in a prime position for an extended move higher. GBP/USD has sold-off since June 2021 and currently trades around the lower bound of the long-term descending channel – meaning there is a lot of room to the upside should we start to see significant bullish momentum.

While the current chart still appears bearish, sterling appears to have bounced off the 1.3080 level – a prior level of support. Short term sterling momentum may see prices approach 1.3190 as the nearest level of resistance, followed by the zone of resistance around 1.3265.

Something to keep in mind is the relative stages of the rate hiking cycle between the Fed and the Bank of England (BoE). The dollar has shown resilience and is likely to remain at elevated levels when considering the increasing probability of 50 basis point hikes in May and June. In contrast, the BoE has already hiked in all of their last three meetings (none of them being as large as 50 basis points) and may become reluctant to hike at the same pace in light of the negative economic effects of the war in Ukraine – mainly stubbornly high energy prices. 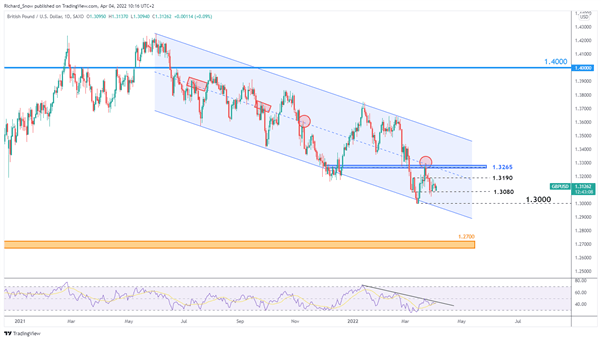 According to the latest Commitment of Traders report, large speculative institutions such as hedge funds, are increasingly short sterling while IG client sentiment shows long positions outweighing shorts by more than 2.5 times. This is worrying for cable appreciation as clients, on aggregate, attempt to call reversals during strong moving trends to their detriment, while large speculative institutions tend to trade in the direction of the prevailing trend. 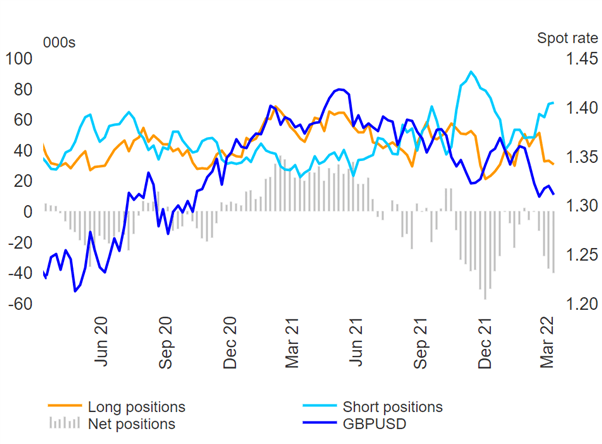 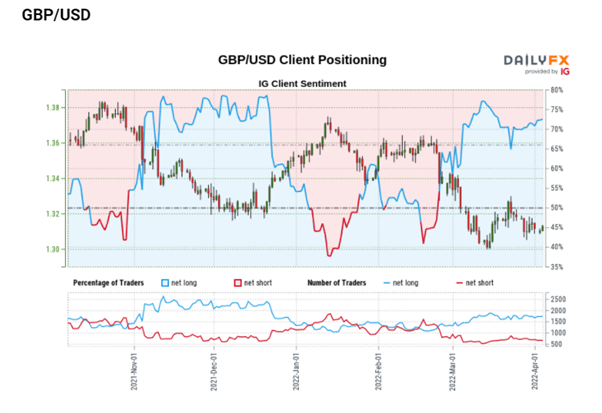