Sabina Gold & Silver (OTCQX:SGSVF) is an advanced-stage exploration company with assets located in the Canadian province of Nunavut. Sabina’s flagship Back River gold project is big, high-grade, with huge exploration potential. Moreover, it is fully permitted and shovel-ready.

The Back River gold project is located in the south-western part of Nunavut. The property that covers an area of 485 km2, includes a series of gold deposits situated in banded iron formations. The majority of development activities have been focused on a relatively small area known as the Goose complex of deposits. The Goose complex includes measured and indicated resources of 5.33 million toz gold, at a gold grade of 5.87 g/t and inferred resources of further 1.85 million toz gold at a gold grade of 7.43 g/t. As can be seen in the table below, slightly more than 2.5 million toz gold are included in the reserves category. The reserves gold grade equals 6.32 g/t. It would be a relatively good number for an underground mine. However, it is important to note that approximately 2/3 of the reserves are open-pittable. For an open-pit mine, gold grades around 6 g/t are really excellent.

Another positive feature of the Back River gold project is the fact that there is not only high potential to discover new deposits on the sizeable property, but even the currently known deposits in the Goose complex are still open in several directions. As can be seen in the picture below, the company believes that the Goose complex alone can contain over 10 million toz gold. According to Sabina, 1,000 meters of its banded iron formation has the potential to contain around 1.4 million toz gold. And there remain more than 1,200 meters of the formation drilled but not yet included in the resources, and also more than 4,000 meters of yet untested plunge length.

Very interesting is also the theory that the Nuvuyak zone and the Vault zone of the Umwelt deposit could be connected. This theory is based on the similarity of both mineralized zones. If it is true, this approximately 3 kilometers long area could contain several million toz gold.

The 2015 feasibility study outlined a combined mining operation including three open pits (Llama, Umwelt, Goose Main) and one underground mine (Umwelt). The ore from the four mines should be processed at a central processing plant with a throughput rate of 3,000 tpd. As a result, average annual gold production of 197,000 toz gold, at an AISC of $763/toz should be reached. The initial mine life was estimated at 11.8 years, however, as I mentioned above, the exploration potential almost warrants its further expansion. The pre-production CAPEX was estimated at a very reasonable level of $332 million. At a gold price of $1,150/toz, the after-tax NPV(5%) was calculated at $384 million and the after-tax IRR at 24.2%. However, every $100 increase in the gold price adds approximately $100 million to the after-tax NPV(5%). At the current gold price of approximately $1,650/toz, it equals to $884 million.

However, there is a problem with the feasibility study. It is 5 years old. It means that especially the cost estimates are dated. It is possible to expect that not only the initial CAPEX but also the AISC will be higher than projected back in 2015. Also the management admits this fact and prepares an updated CAPEX estimate. The main cost drivers should be a 15% cost inflation (since 2015) and some scope changes. But even if the CAPEX increases by let’s say 25%, it should remain at a relatively low level of approximately $415 million. At the current gold prices, the economics of the project should remain great.

It is important to remember that Sabina is not only a one-trick pony. It has also another valuable asset. A 22.5% silver royalty on the Hackett River project. Hackett River is situated in Nunavut, just like Back River. It contains indicated and inferred resources of approximately 6.1 billion lb zinc, 1 billion lb lead, 0.8 billion lb copper, 289 million toz silver and 610,000 toz gold. The project is owned by Glencore (OTCPK:GLCNF) (OTCPK:GLNCY). Sabina owns a 22.5% silver royalty on silver production up to 190 million toz. After this production milestone is reached, Sabina’s royalty will be reduced to 12.5%.

According to Sabina, silver deliveries should equal approximately 3 million toz per year. The problem is that Glencore doesn’t seem to be hurrying to get Hackett River into production. But Sabina’s royalty may become very valuable in the future after the metals prices improve and Glencore decides to move the project ahead. The royalty could be an interesting acquisition for any royalty & streaming company or for Glencore itself. 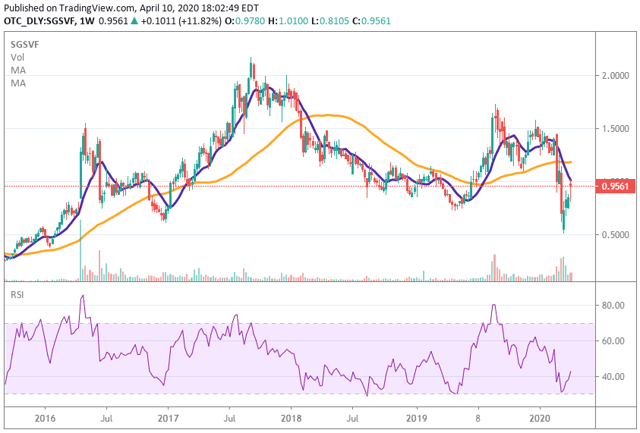 As can be seen in the chart above, Sabina experienced a steep share price decline over the recent weeks. Its share price declined from $1.5 to $0.5 and although it has partially recovered, it is still below the $1 level. Its current market capitalization is $285 million. It may seem like a relatively high valuation for a company that hasn’t started production yet. However, it is important to remind that the project has very attractive economics and enormous exploration potential, moreover, it is located in a safe jurisdiction and it is shovel-ready. Right now, there are not too many projects that fit these criteria.

However, after listing all the positives, it is important to mention also the potential risks. Of course, the biggest problem seems to be financing right now. It is not known how much the mine construction will cost. As I noted above, the feasibility study is dated and Sabina admits that the CAPEX will be higher than $332 million. The company is trying to negotiate an EPC (Engineering, Procurement, Construction) contract with a fixed price for all components of the processing plant. After the contract is closed, Sabina will be able to update the initial CAPEX estimate, and subsequently, complete the financing package. The company has already negotiated a debt portion of the financing package, although the details haven’t been released yet. Only the December 2018 news release states:

In addition, independent third-party review of the Project has been completed and we have been presented with favourable terms on a debt package for the Project that does not require streaming or royalties.

The negotiated debt financing should be still on the table, as the recent corporate presentation states:

It is really hard to speculate how big the equity financing will be, but in my opinion, the updated CAPEX will be around $400 million and at least 60% of it will be covered by debt, which means that the equity portion should be worth around $160 million. As of the end of 2019, Sabina held cash and cash equivalents of $20.2 million, which definitely won’t be enough to finance the common operations until the production start-up. It means that it is reasonable to expect Sabina to raise around $200 million via equity financing, to finance the mine construction and common operations.

At the current share price, it would mean an approximately 70% share dilution. The share count would grow from 293 million to almost 500 million. But it is important to note that at an annual production rate of 197,000 toz gold, at an AISC of $763/toz, the mine should be able to generate a free-cash-flow of around $165 million, at a gold price of $1,650/toz (the current gold price is approximately $1690/toz). Given the quality of the assets, the safe jurisdiction, and the exploration potential, it is reasonable to expect a price-to-free-cash-flow ratio of at least 10, which leads to a market capitalization of $1.65 billion.

At 500 million shares outstanding, this should lead to a share price of $3.3. Of course, this is only a rough estimate, as also the AISC and maybe also the production rate will be probably different from numbers outlined in the 2015 feasibility study. However, it illustrates that although the possible 70% share dilution may look scary, it still leaves a significant upside potential. Moreover, if Sabina waits with the equity financing for a higher share price, the resulting share dilution may be much smaller.

Another source of potential risk is the Back River’s location. Yes, the jurisdiction is safe, but it is also pretty cold. And the project is pretty isolated. The isolation was partially solved by building a port and a winter ice road. However, we can only wait and see, how well Sabina will be able to deal with the very cold climate. The good news is that Back River won’t be the only mine operating in cold Nunavut. There is also TMAC’s (OTC:TMMFF) Hope Bay underground gold mine, Agnico Eagle’s (AEM) Meadowbank open-pit gold mine, or Agnico Eagle’s Meliadine open-pit and underground gold mine. If these miners are able to deal with the problems caused by arctic weather, there’s no reason why Sabina shouldn’t be able to.

And, of course, there is also the coronavirus problem. Sabina, just like many other miners and explorers, has been negatively affected by the coronavirus. The company has deferred its spring drill-campaign. Moreover, on March 31, Sabina announced that due to the financial market volatility and currency exchange rate fluctuations, it has decided to put its EPC contract negotiation activities on hold. As a result, also the works on the CAPEX update will be postponed.

Sabina Gold & Silver is an interesting company with an advanced, shovel-ready world-class gold project and huge exploration potential. The impacts of the coronavirus will lead to some delays in the project development, on the other hand, they generated an opportunity to purchase Sabina’s shares cheaper. The Back River gold project has very attractive economics, according to the 2015 feasibility study, its after-tax NPV(5%) equals approximately $900 million at the current gold price.

The annual free cash flow should be around $165 million. Although the CAPEX estimates will have to be updated and some share dilution will be inevitable, there is a significant upside potential left. Although the coronavirus crisis is far from over, Sabina Gold & Silver offers an attractive long-term investment opportunity. However, due to the current market volatility, it is reasonable to initiate a position only slowly, not by investing the whole dedicated sum of money at once.

Disclosure: I/we have no positions in any stocks mentioned, but may initiate a long position in SGSVF over the next 72 hours. I wrote this article myself, and it expresses my own opinions. I am not receiving compensation for it (other than from Seeking Alpha). I have no business relationship with any company whose stock is mentioned in this article.