Where is the sizzle when you need it? Ruth’s Hospitality Group, Inc. (RUTH) has fallen dramatically from a 52-week high of $27.14 to a recent, intraday low of $2.32. This represents a 91.5% decline. The uncertainty regarding COVID-19 caused the stock to absolutely plummet. The stock currently trades at $8/share; however, I still believe it is dramatically marked down by the market. The real question is:

Does Ruth’s have enough liquidity to survive a shutdown of its operations for months potentially?

In this article, I will show you the answer to that question is, yes. To prove that, I will do a full sequence liquidity analysis. Following that, I will discuss the implications of management’s recent actions to ensure adequate liquidity and the risks involved with the business.

Before I get to the liquidity analysis, I want to give a brief overview of the business. Ruth’s Hospitality Group, Inc. develops and operates fine dining restaurants under the trade name Ruth’s Chris Steak House. The company was founded in 1965, expanded to its second location in 1972, and became a publicly traded company in 2005. There are currently 160 Ruth’s Chris Steak Houses; 84 are company owned, three are operating under contractual agreements, and 73 are franchisee owned. The company owns or has franchises in the USA, Aruba, Canada, China, Hong Kong, Indonesia, Japan, Mexico, Singapore, and Taiwan. 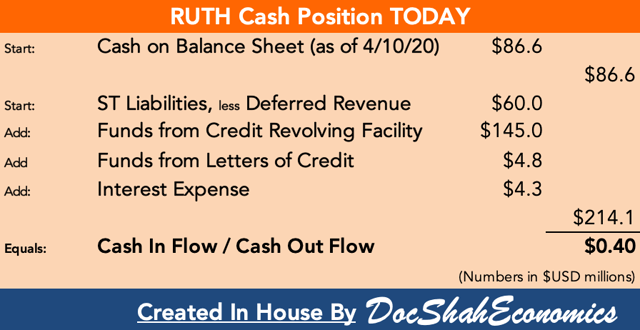 Ruth’s stated that it has $86.6 million of cash on its balance sheet as of April 10th, 2020. This amount is a combination of cash and borrowings.

Total short-term liabilities, less deferred revenue, come out to be $60.0 million. Deferred revenue is money received, but not yet earned. In Ruth’s case, deferred revenue is comprised of the gift cards purchased by patrons. When a customer purchases a gift card, Ruth’s collects the cash (asset), but owes them a service (liability). Per Ruth’s policy, gift cards are non-refundable. As a result, management will not have to return any cash which they have received from customers who purchased a gift card.

In order to improve upon its liquidity, the company drew down from its credit revolver. The company had $64.0 million already drawn as of December 29th, 2019. On March 16th, 2020, the company drew down on the remaining amount of $51.2 million and $4.8 million in letters of credit. Ruth’s felt the total amount drawn was not enough and as such, on March 26th, 2020, the company exercised the $30.0 million accordion feature in the existing facility. In total, Ruth’s now has $145.0 million in outstanding debt and $4.8 million in letters of credit from its credit revolving facility.

The current interest rate on these loans is 2.74%. Combined with the interest from Ruth’s CARES Act loan (discussed in the note at the end of this section), the total interest expense for 2020 comes out to be $4.3 million.

Note: Ruth’s also entered into loan agreements under the ‘CARES Act’ administered by the US Small Business Administration (SBA). Ruth’s received $20.0 million from the SBA loans. The loans mature on April 7th, 2022 and carry a 1.00% interest rate. The CARES Act requires Ruth’s to use the proceeds from this loan primarily for payroll costs. Also, because this loan does not mature in 2020, it was not included in my table. The interest payable for 2020, however, is accounted for in my table. 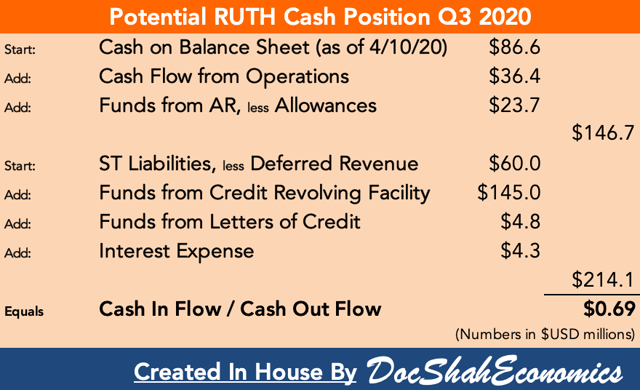 So, before panic sets in and you think to yourself ¢40 on the dollar is a path to insolvency, let me bring you back to reality. The liquidity analysis is a snapshot in time, just like a balance sheet. This is a depiction of the company’s cash position as it stands today. Going forward, as Ruth’s opens up and begins to earn cash from patrons, its cash position will significantly improve.

Let’s do some calculations and see what Ruth’s cash position could look like in a few months. In 2019, Ruth’s cash flow from operations equaled $72.9 million. If we assume the company can only operate for 50% of 2020, then a rough estimate of the 2020 cash flow from operations would be about $36.4 million. Ruth’s also has an outstanding balance of $23.7 million in accounts receivables, less the allowance for doubtful accounts (people who management expect will not pay them back). Since the company needs cash immediately, management may try to gain access to their receivables quicker. So, total cash would equal $146.7 million.

All the liabilities remain the same. As a result, Ruth’s cash in-flow is now ¢69 on the dollar, which represents a 72.5% improvement from today.

Note: Under recessionary times, the allowance for doubtful accounts may expand, but that should be negligible in the overall receivables account balance.

This is the most important forecast because it allows us to compare the state of the company year over year. If my prediction is accurate, at the end of 2020, management will have gotten their hands on $146.7 million in cash. Let’s assume the company saves $1.7 million on the balance sheet to start 2021 in case of emergency. That means the company has $145 million in cash to pay off its cash out-flows.

Note: The interest rate on revolving credit varies. According to the company:

Essentially, Ruth’s revolver, like other revolvers, carries a floating rate + an applicable margin based on the company’s leverage. 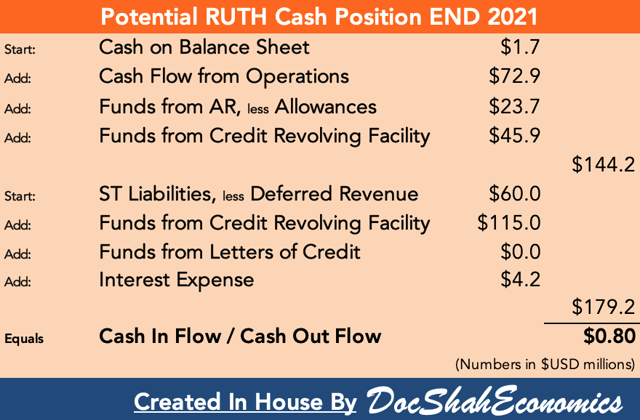 This is one more bonus table I want to present. Since Ruth’s can redraw on its revolver as soon as it is paid off, in 2021 the company will have access again to $45.9 million from its revolver (assuming management does not utilize the accordion feature). Let’s make some statements/assumptions just for calculation purposes:

So, the first part of my forecast would wind up giving Ruth’s $144.2 million of cash throughout the entire year. The cadence is unpredictable, but the point I am making is at the end of the year, Ruth’s ought to have had $144.2 million in cash flow through its business.

The second part of my forecast would leave Ruth’s with $179.2 million in liabilities. The cash in-flow comes out to be ¢80 on the dollar. Consequently, Ruth’s will be in a great position. If the company flushes its cash to pay off its liabilities, then it could graduate into 2022 with only $35.0 million owed on the revolver (plus the $20.0 million in SBA loans which mature that year). This represents a near 50% reduction in outstanding revolver indebtedness from the prior year’s cash position and a 77% reduction from today.

Note: Yes, the company may earn slightly less than the numbers presented if a recession takes its toll, but I am picking these numbers as they have recent historical merit. I encourage readers to use my table and pick their own forecasts.

So, now that we understand management’s actions to improve liquidity in conjunction with the current balance sheet, we have to ask what are the long-term ramifications of such arrangements.

Per the Amended Credit Agreement, Ruth’s is:

As a result, Ruth’s has:

In the immediate future, management will likely experience a bit of a “hands are tied” situation, where they would love to resume expansion, but will not have the flexibility to do so as originally planned. Furthermore, future profitability will take a hit as funds from operations are diverted to pay for existing indebtedness. These are temporary problems and should not materially affect the business; nevertheless, they must be taken into consideration as a potential investor.

All in all, the company has taken a lot of action to provide the necessary liquidity to keep operations afloat. These are all the right moves and as time goes on, management has stated they will consistently reevaluate reducing other operating costs as opportunities arise. However, this is already a great base and should provide sufficient cushion to bridge the gap between the economic shutdown currently taking place and the economic reopening that will ultimately take place.

So, we understand the liquidity position of the company today / going forward and the implications of management’s actions. Now, it is time to discuss some of the biggest risks that Ruth’s faces today:

Lastly, I want to discuss risk number six in further detail. While it is true a recession will markedly reduce Ruth’s revenues, I think the fear is often overblown. First, Ruth’s serves an entirely different clientele. Ruth’s clientele has significantly more disposable income and is less affected by economic downturns. Second, Ruth’s customers often dine in celebration of an achievement or life event. I cannot predict the future, but there are two things I can assure you of no matter what happens: there will always be the wealthy and there will always be celebrations.

To put a recession in perspective, we can use The Great Recession as a case study. From the data, we can see that in 2009 (after the recession had sunk in), Ruth’s gross profit fell by 14.3%. To put this in perspective, Darden Restaurants (DRI) saw a 6.2% increase in gross profit, The Cheesecake Factory (CAKE) saw a 3.4% increase, and Texas Roadhouse (TXRH) saw a 9.4% increase in 2009.

So, we can see that cheaper alternatives to Ruth’s did fairly well overall. A 14.3% drop is certainly significant, but it is not the end of the world. Keep in mind, this was a time characterized by global uncertainty and hysteria. Considering how devastating The Great Recession was for many Americans, I would have expected a much bigger drop than 14.3%.

The point I am making is I believe Ruth’s is a resilient business and American classic. The company has faced it all since its founding 55 years ago. Sure, sales will suffer in 2020 and perhaps the following year if the recession continues, but all that means is investors have an opportunity to make a long-term investment in a wonderful business at a great price.

The bottom line is, I do not believe either COVID-19 or the current liquidity issues will be Ruth’s downfall. Ultimately, the question is can Ruth’s make it through this year alive? After analyzing management’s actions to ensure sufficient liquidity to navigate the choppy waters ahead, I believe the answer to that question is, yes.

The additional indebtedness taken on to provide liquidity will likely reduce future profitability and derail expansion in the short run, but these are temporary hiccups in an otherwise great business.

Cheers to the prospect this stock sizzles as good as its steaks.

Note: This is only one of many articles I have mapped out for RUTH. I will be presenting more articles examining the past performance of the company, ratios and trends, management initiatives/competence, and much more. Finally, I will present the reader favorite, The Valuation Article, which will feature my DCF, along with F.A.S.T. Graphs technical analysis.

Disclosure: I am/we are long RUTH. I wrote this article myself, and it expresses my own opinions. I am not receiving compensation for it (other than from Seeking Alpha). I have no business relationship with any company whose stock is mentioned in this article.

Additional disclosure: Neither this article nor any comment, message, video, or interaction associated with it is to be taken as financial advice. Investors should always do their own research before executing any financial transaction. Raul Shah is not liable for any financial outcome which might occur. Investors assume full responsibility for their actions.