PUMP Responds To The Demand Fall

With better internal control and a different set of executives to lead, ProPetro (PUMP) was looking to leave the troubled time behind before the energy market saw the current dire. I think the ongoing energy price crisis will lower its pressure pumping asset utilization in the medium term. With lower-than-expected fleet count, the top-line, too, will fall in the short term. The negative free cash flow is another concern that it would want to tide over through lower capex in the current environment.

On a positive note, the company managed to hold operating profitability steady by reducing costs. It continues to benefit from the ten-year agreement with the upstream producer Pioneer Natural Resources. The management expects the DuraStim hydraulic fracturing fleets to produce superior margins, thus reducing the margin loss in 2020. Its balance sheet is relatively free of financial risks because of low leverage. Returns from the stock price will stay low in the near term. However, I think it can produce positive returns in the medium term. 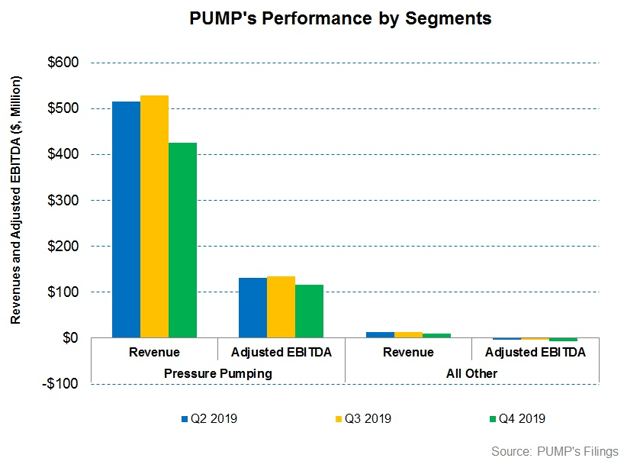 Even before the coronavirus affected energy demand, the hydraulic fracturing was already reeling with lower demand and excess supply of frac equipment. The company’s management was already expecting effective utilization to reduce to 19.2 fleets in Q4 compared to 25.1 fleets in Q3. Customer budget exhaustion, softening industry demand, and the seasonality led to the change in the outlook. The virus-related slowdown will exacerbate the situation. Year-to-date, the crude oil price tumbled down by ~70%. In March, the management, keeping in mind the sharp decline in oil prices and the weak outlook for the oil and gas industry, disclosed a slew of measures. The plan of action includes reducing capex, rightsizing the workforce, cost reductions, and replacing certain outsourced services with internal sources.

The company entered into Q1 with around 20 fleets, and it plans to exit with effective utilization of approximately 18.6 fleets in Q1. So, it has already stepped back from the earlier count. Following PXD’s asset acquisition, ProPetro now has a 10-year strategic service agreement with Pioneer Natural Services. The acquisition of pressure pumping assets added 510,000 hydraulic horsepower (or HHP) by the end of 2018, as I explained in my previous article. Utilization started to fall below 100% since Q4 2019. Back in Q4, the company used extra equipment to redeploy it to the active fleets, which led to higher efficiency and lower downtime. The company has been strategically using equipment to increase the size of the active fleets to prolong equipment life. This way, the company can keep its maintenance capex down. While it was spending ~$7 million per crew per year in maintenance capex in 2019, the management is confident that it can reduce the cost considerably in 2020.

Liberty Oilfield Services (LBRT), another hydraulic fracturing services provider and PUMP’s peer in the industry, has recently disclosed the intention to cut 2020 total capital expenditures by 50%. It will also reduce the fleet count by approximately 50% and executives’ salaries by 30% in response to the demand fall following the coronavirus attack. I think PUMP, too, may have to readjust its fleet count downward significantly.

The DuraStim pump is ProPetro’s key offering because it has several advantages over the conventional frac units. Read more on this in my previous article here. Over the past couple of years, the company’s operation shifted to pad development, longer laterals, and larger job volumes in the Permian Basin. The company’s first electrically powered DuraStim fleet began operations in January 2020. However, in February, it removed the fleet from the customer’s location and returned it to the manufacturer, AFGlobal. Upon modifications, it would improve the software and the calibration to pump cylinders. After being called back, the fleet was recently deployed to the wellsite. PUMP can deploy new DuraStim fleets at different times throughout the year, although the agreement can be extended. I think the incident, while might have been necessary, would lead to higher costs and lower margins in Q1.

Following the internal control deficiencies, the company made executive-level changes. In March, it named the current Executive Chairman Phillip A. Gobe as the new CEO. It also made several other changes in the executive positions. However, the process related to the scope of the internal review and the proposed remediation plan is not complete yet.

PUMP expects to stay cash positive in 2020. It figures that maintaining liquidity is of surmountable importance in today’s environment. Being cash positive implies EBITDA exceeding maintenance capex at the fleet level. The company does not want to burn cash to keep equipment at work. The efficient pressure pumpers will likely operate on the location that produces the highest EBITDA and, therefore, makes cash with the fleet.

Growth In The Unconventional Shales 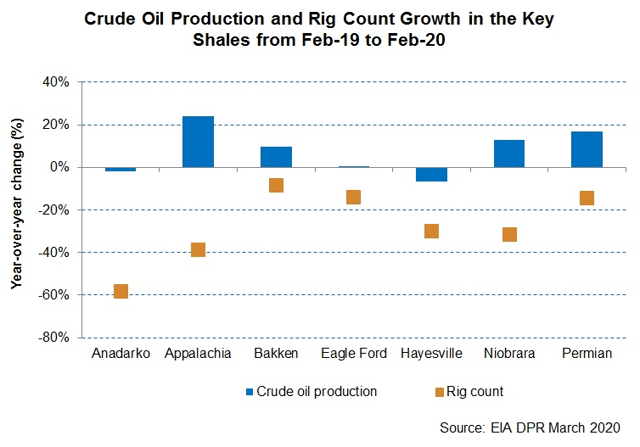 Understanding The Value Drivers In Q4 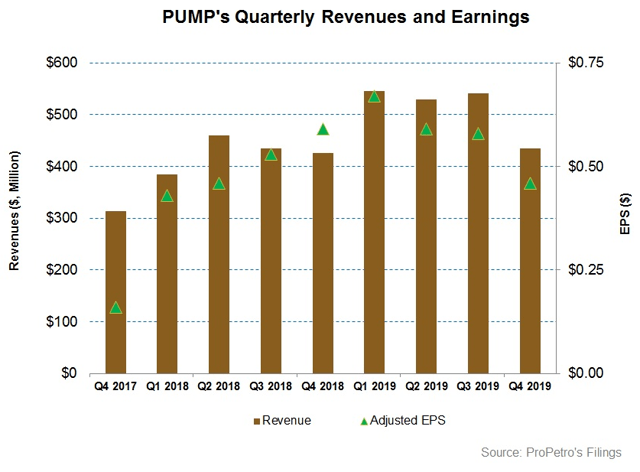 In Q4 2019, ProPetro’s revenues declined by 20% compared to Q3 2019, due primarily to the upstream companies’ lower capex following the low level of energy prices. Adjusted earnings declined by 21% from Q3 to Q4. If we look at the company’s cost structure, pressure pumping cost of services as a percentage of revenues decreased, leading to a higher adjusted EBITDA margin (27.5%) in Q4 compared to 25.5% in Q3. The fall in earnings in Q4 was due primarily to the $7.9 million charges associated with the internal review, as I discussed in my previous article.

In FY2019, the company’s capex increased significantly (77% up) compared to the previous year. The two new-build DuraStim hydraulic fracturing fleets and the acquisition of frac fleets and coiled tubing units in the PXD transaction led to the higher capex. As a result, its free cash flow turned negative in FY2019.

PUMP’s total liquidity (borrowings available under revolving credit facility and cash balance) as of December 31, 2019, was $193 million. Its debt-to-equity ratio (0.13x) is significantly lower than peers, which include Patterson-UTI Energy (PTEN), Liberty Oilfield Services (LBRT), and Nabors Industries (NBR). As the management has set out to reduce costs and maintain a healthy cash balance, I think capex will fall significantly in 2020, and FCF will improve. It now has limited opportunities to invest in growth capex. Plus, efforts have been underway to reduce maintenance capex, as I discussed earlier in the article. So, with limited short-term financial risks and better cash flows, PUMP is likely to be better positioned to withstand the challenges of the current energy market downturn. 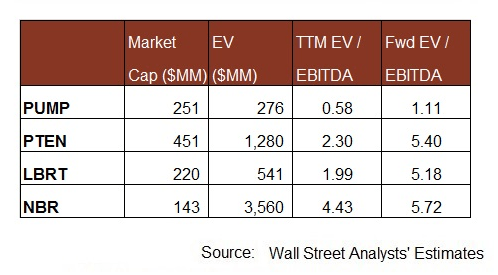 PUMP’s forward EV-to-EBITDA multiple expansion versus the adjusted trailing 12-month EV/EBITDA is less steep compared to peers because the sell-side analysts expect the company’s EBITDA to decline less sharply than the fall in EBITDA for peers in the next four quarters. This would typically result in a higher EV/EBITDA multiple compared to peers. The stock’s EV/EBITDA multiple is lower than its peers’ (PTEN, LBRT, and NBR) average of 2.9x. It is currently trading at a significant discount to its average (7.7x) since Q3 2017. So, the stock is undervalued compared to peers at the current level. I have used estimates provided by Seeking Alpha in this analysis.

According to data provided by Seeking Alpha, nine sell-side analysts rated PUMP a “buy” in April 2020 (includes “very bullish”), while 12 of them rated it a “hold.” Only one of them rated it a “sell.” The consensus target price is $6.5, which at the current price, yields ~110% returns. According to Seeking Alpha’s Quant Rating, the stock receives a “Neutral” rating. It scores highly on earnings revisions and value, but scores moderate-to-poor on profitability, growth, and momentum.

What’s The Take On PUMP?

The lack of pressure pumping demand and upstream energy companies’ budget exhaustion was already upsetting the hydraulic fracturing market, even before the activity froze during the Coronavirus incident. Although PUMP’s performance was relatively resilient in the first two months of the quarter, the on-going energy price crisis could tailspin into significantly lower utilization. With lower-than-expected fleet count, the top-line, too, will fall in the short-term.

Despite the revenue fall, PUMP managed to keep its cost level unchanged, which helped it keep operating profitability steady. The company has the benefit of the ten-year agreement with Pioneer Natural Resources. Plus, the deployment of three DuraStim hydraulic fracturing fleets will mitigate some of the top-line loss in 2020. Its balance sheet is relatively free of financial risks because of low leverage. If FCF turns positive again in 2020 following the impending capex cut, I think the stock price can produce positive returns in the medium-term.