Local headline inflation dropped to 5.7% from 5.9% in December. The lower figure comes after the South African Reserve Bank voted to raise interest rates in November of last year as inflation approached the upper band of the 3-6 percent inflation target. While year on year inflation declined, inflation increased by 0.2% in January from December.

The monetary policy committee (MPC) has their work cut out for them in March as they discuss whether to maintain rates as they are or hike along with the US and UK. As things stand, the Fed is all but certain to hike rates in March and all that remains to be seen is whether we see a 25 or 50 basis point hike. The Bank of England has raised rates at its last two meetings. The effect to which anticipated rate hikes in developed economies are likely to weigh on the Rand remains to be seen.

Rand-linked commodities such as gold and iron ore have seen lower prices in the last few days, preventing the local currency from making any significant gains versus the dollar.

The Rand has been trading largely between 15.00 and 15.25 as it grapples with lowering commodity prices (god and iron ore) and a real lack of impetus. ZAR has thus far failed to capitalize on a softer dollar which has been the case since yesterday’s news of the withdrawal of some troops from the Southern and Western Russian military districts from the Ukrainian border.

Interestingly, when looking at the daily USD/ZAR chart, price action appears to respect a zone of support around 15.00 – 15.10, frequently closing above 15.10 despite pushing lower in the session. Thus far, the 15.00 level appears to be holding up and could act as a spring board for bullish continuation if we see a move that closes above 15.39/15.40. The RSI approaches oversold conditions but for now remains within the typical range.

However, if the dollar continues to decline and tensions ease, the 15.00 level of support may become susceptible to a breakdown. The most relevant level to be monitored for continued bearish price action is the 14.86 level. 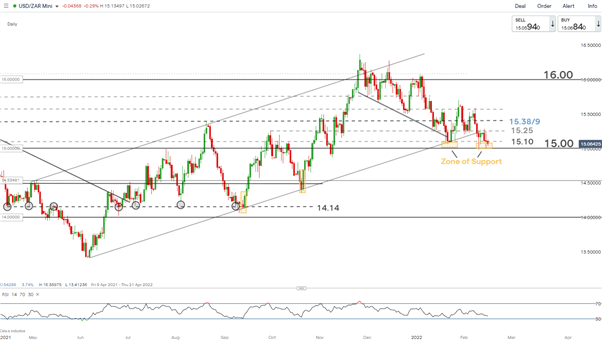 carloscastilla/iStock via Getty Images Talking big is second nature to many an ambitious Chinese company. But luxury e-commerce platform Secoo Holding Ltd. (NASDAQ:SECO) apparently went a tad too far with its fancy talk of setting […]