The JPY/USD has shown significant volatility throughout the coronavirus crisis.

We saw a brief surge of the currency to just above the 0.0098 level before reverting back downwards to 0.00923 at the time of writing.

Markets, in general, are quite volatile at the moment, with the currency market being no exception.

In this regard, it is very hard to predict in the short term where the JPY/USD can be expected to go next. However, depending on how much longer lockdown restrictions remain in place and the long-term economic ramifications of the same, the JPY/USD could end up reclaiming its role as a safe-haven currency after several years of greenback strength.

Interest rates in the United States have dropped to near zero in an attempt to re-stimulate the economy after this crisis. While the Bank of Japan is maintaining negative interest rates at -0.1 percent, higher rates in the United States were previously enticing investors to the dollar. However, this is no longer likely to be the case given that monetary policy in the U.S. has diverged quite drastically from a series of controlled rate rises – owing to the necessity of stimulating the economy with rate cuts.

Regarding monetary policy in Japan, the U.S. rate cut has afforded discretion to the Bank of Japan in significantly increasing its purchases of riskier assets such as ETFs and real estate trust funds – up to ¥12 trillion and ¥180 billion respectively.

However, the Nikkei 225 declined on this move, as it indicates that the central bank has limited leeway to ease further. In turn, this could mean that we see a rise in the yen against the greenback. While the USD had been propped up by rising interest rates, the Bank of Japan has limited room to keep the yen weak after adopting more stringent quantitative easing measures than the U.S. over the years.

Moreover, let’s take a look at the longer-term picture for the JPY/USD. We can see that in spite of the interest rate differentials between the U.S. and Japan, the JPY/USD has actually been seeing a steady rise since 2017. 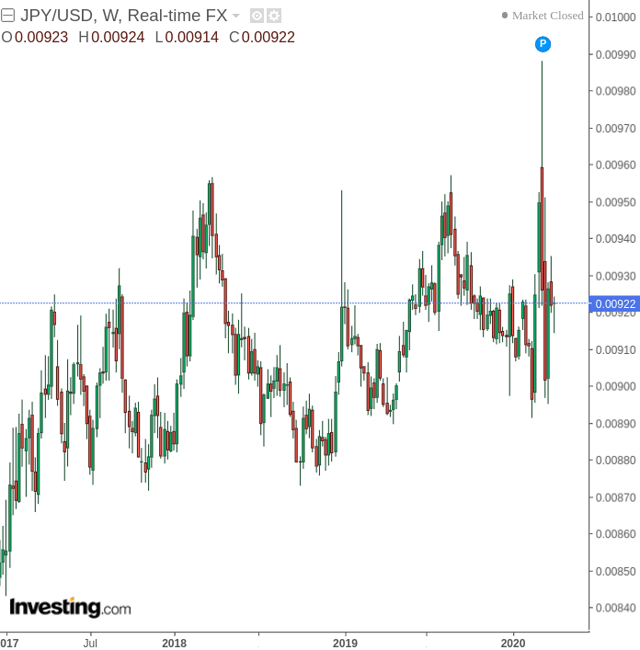 In this regard, I cannot see a case for a stronger USD given the recent rate cuts. The yen, on the other hand, was being kept artificially low by the Bank of Japan through quantitative easing measures. However, it is clear from this graph that QE has only been able to achieve so much in this regard.

The yen is a traditional “safe-haven” currency and is in high demand in times of crisis. Well, this is a crisis if ever there was one. While the currency markets are likely to prove volatile over the next couple of months, I take the view that sustained JPY/USD strength could be ahead over the longer term.