That we’re having a recession is obvious, the two things we don’t know being how deep it’s going to be and how long it’s going to last. To some extent the deeper will be the longer as it’s always easier to lose economic activity than it is to build it. Everything we’re finding out is that this is going to be a deep, deep, recession, certainly up there with the Great Depression in the size of the plunge. I’m still, as are all the economic forecasts out there, assuming that it will be short with a swift recovery. Not back to where we were, but to close at least.

The importance of this being the effect on stock prices – for we’re investors here and that’s what we’re interested in. A quarter or two of bad – even horrendous – times are different from years of such. Don’t forget, the current value of a stock is the net discounted value of all income from it. That makes near term results important, sure, but it’s the long term that really matters in aggregate.

The first shocker is the number of initial claims for unemployment insurance:

The employment numbers aren’t lovely but they’re nowhere near as gloomy:

Total nonfarm payroll employment fell by 701,000 in March, and the unemployment rate rose to 4.4 percent, the U.S. Bureau of Labor Statistics reported today. The changes in these measures reflect the effects of the coronavirus (COVID-19) and efforts to contain it. Employment in leisure and hospitality fell by 459,000, mainly in food services and drinking places.

Well, 700,000 looks better than 10 million, right? The problem being that the employment number is a monthly one and thus hopelessly out of date. 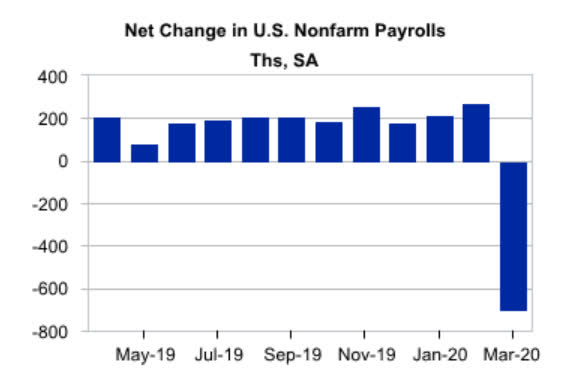 (Changes in employment from Moody’s Analytics)

The same problem afflicts the Challenger layoffs number, along with another point:

Job cuts soared in March because of the COVID-19 outbreak, with total job cuts falling just short of 225,000. This figure marks an increase of 267% from year-ago levels. The report compiled by Challenger, Gray and Christmas Inc. found that layoffs related to the pandemic were concentrated in the entertainment/leisure industry,…

Again, it’s a monthly number, so the data collection period is well behind us and not reflective of current reality.

There’s also the point that the Challenger report is about announced layoffs. A national chain or company might announce layoffs. The dive bar around the corner closing doesn’t. So this data is hugely skewed toward large companies – and there’s a reasonable thought that it is small employers bearing the brunt of this recession.

The above are US jobs numbers but clearly something very similar is happening in Europe as well. Moody’s Analytics is apocalyptic as to the effects:

The economic and political fallout of the outbreak is already being felt across the globe. Leading data point to a historic decline in GDP across most of the major economies in the second quarter, with Europe in the spotlight. GDP in the region will likely fall by over 40% q/q annualized in the three months to June.

IHS Markit (by email) gives us something similar for the US:

IHS Markit now estimates that GDP declined at a 3.5% annual rate in the ﬁrst quarter and we look for a 26.5% annualized decline in the second culminating in a 2020 growth rate of -5.4% measured year-over-year.

The first being that the one quarter decline in GDP at that annualised rate is entirely horrendous. But the annual decline – higher than reality in my opinion but still – is hugely lower than that one quarter. The implication of this is that while this recession is going to be deep it’s going to be short.

This accords with what we know from economic theory. If a recession is due to some build up or imbalance within the economy then it can take a long time to get it sorted out. We’ve got to figure out what went wrong, correct it and only then can growth resume. On the other hand if we know exactly what is causing the problem then once we’ve solved that then we’re done.

The coronavirus is most definitely an exogenous shock to the economy, once new cases decline to no more than a background grumble then restrictions will be lifted and growth will resume. At which point growth will be fast. It will, I think, be like Germany post WWII. Industry had been bombed flat, quite literally, hit and hit again until the rubble bounced. But the knowledge of how to do things was still there – that human capital, the only really important kind we’ve got – and growth resumed so that the country was swiftly past 1939 levels of output.

By the way, no, I don’t think coronavirus is as bad in its economic effects as WWII.

The second point is that Europe’s experience is going to be worse than that in the US. For the eurozone – what we usually mean by “Europe” these days – already had substantial economic problems. They’re being hit with a double whammy.

I also think that Europe will be slower to recover for that same reason – they’ve got two things, not just the one, wrong with the economy.

I am unchanged in my general view, this is going to be a nasty recession but it will be a short one. It looks like it will be deeper than I had thought it would be but I stand by the idea that it will be short. We are, after all, seeing from China that the place is growing again already.

As I’ve been saying for some time now I think the eurozone climb up out of this mess is going to be slower than that elsewhere. Thus as investors we want to be in well, there are various names for this, North Atlantic economies, Anglo Saxon perhaps, but really UK and North America.

The current information is also telling us that the recession is going to be deeper than we’d thought but I still don’t see it extending that far into the future. Once the infection rate drops then we’ve dealt with the problem, growth will resume from that lower level.

What that means is that we want to be in those stocks which will survive, that’s an obvious caveat. So, strong balance sheets are an essential – or valid promises of government support. It’s also true that the price of risk rises after shocks like this. So riskier stocks, perhaps amazing new possible tech and so on, will be lower rated than they were before Covid-19.

Our strategy is thus to aim at those large, safe even boring – hey, boring is good right now! – stocks with decent dividend yields currently available at once in a generation prices.