This article was highlighted for PRO+ subscribers, Seeking Alpha’s service for professional investors. Find out how you can get the best content on Seeking Alpha here.

When Xerox (XRX) pulled the plug on its ambitious bid for HP Inc. (HPQ) in early April, the announcement probably wasn’t much of a shock. Xerox is a company with ~$4 billion in market value attempting to acquire something roughly seven times larger than it, and planning to finance the majority of the acquisition with debt – a precarious proposition in a jittery stock market battered by the spread of the coronavirus.

Given that HP shares were already trading below Xerox’s $24/share offer price (representing a $30 billion enterprise value), it’s safe to say most investors and traders were betting the deal wouldn’t happen anyway. Still, as hopes of the lucrative buyout vanished, shares of HP slid a further ~15% to sub-$15. In my view, HP’s new bargain-basement price is too attractive to ignore.

Sure, investors won’t have the quick, profitable exit that they were hoping for. But that doesn’t mean that HP shares don’t still have massive upside from here, if investors are willing to be patient.

As most investors are already aware, HP Inc. is one of the world’s largest manufacturers of both PC and printer hardware. The company used to be much larger when it was combined with HP Enterprise (HPE), which housed all the software and services elements of the old HP behemoth, but a 2015 split of the two entities actually made HP Inc. the sturdier and more reliable business, as HP Enterprise deals with heavy competition against much more modern SaaS businesses.

A glance at HP Inc.’s headline results in FY19 should give you a good idea of how profitable this business is. In FY19, HP Inc. generated $2.24 of pro forma EPS and a staggering $4.0 billion in free cash flows.

Pro forma EPS in the first quarter of 1Q20 rose 25% y/y, while free cash flow (though this is more subject to timing imbalances) jumped 67% y/y. Even after accounting for the impacts of the coronavirus, HP largely expects this strength to continue for the full year FY20. 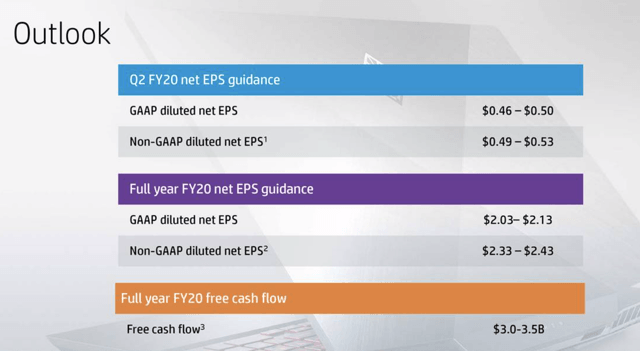 Let’s do some quick valuation math here. At today’s share prices below $15, HP trades at a market cap of $20.70 billion. After netting off the $4.21 billion of cash on HP’s balance sheet against $4.86 billion of debt, its net debt position is $0.65 billion and its enterprise value is $21.35 billion.

Note that Xerox was willing to pay $30 billion in enterprise value for HP, 41% above what HP is trading at today. But the evaporation of this offer certainly doesn’t mean HP isn’t worth at least that much, or more (in fact, in rebuffing Xerox’s bid multiple times, HP CEO Enrique Lores noted that even a $30 billion acquisition price would still undervalue HP’s assets). At current levels, HP is trading at a valuation of 6.1x P/E (based on HP’s FY20 EPS guidance) and 6.6x EV/FY20 FCF (based on the the midpoint of the company’s FY20 FCF guidance of $3.0-$3.5 billion). Despite the sharp drops in major indices since February, HP still trades at a steep discount to the rest of the market.

Of course, a major question on investors’ minds is how the coronavirus will impact HP’s business this year. While the impacts of the coronavirus on the company’s printing segment are unknown, we know that the work-from-home mandates in the U.S. and abroad have spurred near-term demand for PCs and notebooks. A recent Wall Street Journal article noted that major electronics stores are sold out of many PCs, a sharp contrasts to when pundits were commenting on falling PC sales as replacement cycles elongated.

And while a good chunk of these sales might be demand that is pulled-in from future quarters, the immediate influx of cash from PC sales (which makes up two-thirds of HP’s revenue) will give the company plenty of cash and liquidity to navigate through the current crisis.

One other thing we like about HP is that, especially as the Xerox offer descended, HP’s management has been stressing a widely expanded capital returns program. See the chart below: 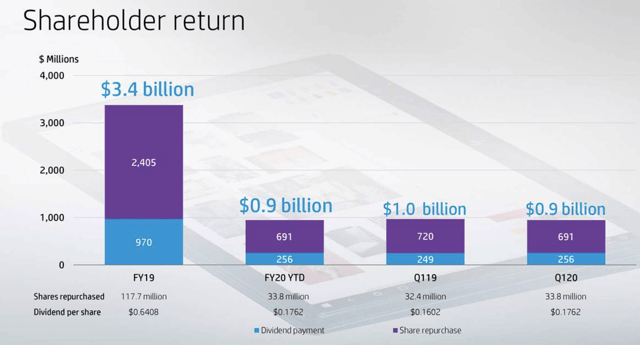 In January, HP announced an uptick in its quarterly dividend to $0.1762 per share, up 10% y/y (more or less in-line with a 25% y/y increase in pro forma EPS for the first quarter). Annualizing this dividend means each share of HP yields $0.7048, indicating a 4.9% yield at current levels.

Of course, HP’s dividend is just a small piece of its overall capital returns program. In FY19, HP spent approximately 2.5x more on share repurchases than it did on dividends. In response to the Xerox offer, HP Inc. unveiled in late February a new, massive $15 billion buyback authorization to be executed over the next three years. At present market values, this now represents 72% of HP’s outstanding market cap.

HP plans to execute “at least $8 billion” of these share purchases within the next twelve months, which I view to be incredibly opportune timing given how low HP’s share prices have sunk since the market began unwinding.

It’s worth noting that while HP’s buyback plans seem ambitious, it’s well-supported by the company’s balance sheet. With $4.2 billion of cash on its current balance sheet, plus the capacity to generate north of $3 billion in free cash flow per year, HP’s buyback plans can offer tremendous returns to current shareholders who are able to wait until the market can re-rate the stock to more normalized multiples in-line with the broader market.

Also key to note from HP’s announcement above is its goal of raising pro forma EPS to a range of $3.25 to $3.65 by FY22. The midpoint of that range suggests a 15% CAGR through the next three years. A mid-teens EPS growth rate for a company producing such little revenue growth may seem somewhat circumspect, but HP’s goal of raising its profitability is amply supported by the broad restructuring it implemented last year. Per CEO Enrique Lores’ remarks on the most recent earnings call:

In Q1, about 800 people exited the company globally as part of the restructuring activities announced in October 2019. We continue to pursue additional cost savings opportunities in addition to our ongoing productivity efforts.

We now have line of sight to $1.2 billion of gross structural cost savings that helped mitigate headwinds, create investment capacity and drop significant profits to the bottom line. We will discuss are expected 650 million net op flow through in FY ’22 later in this call.”

Lores’ $1.2 billion in cost savings is worth $0.82 in additional EPS alone (based on 1.45 billion current shares outstanding), more than half of the gap from FY19’s EPS of $2.24 to the midpoint of that target range if $3.25 to $3.65. HP’s significant planned share reductions will also contribute heavily to reaching that goal.

With HP Inc. trading at less than 7x earnings and free cash flow despite an expectation of growing EPS at a 15% CAGR for the next three years, it’s hard to argue with management’s assessment that HP is dramatically undervalued. The company’s new $15 billion buyback authorization takes advantage of these lower prices, and investors who are willing to be patient can reap sizable returns by getting in at HP’s current, post-Xerox share price.

Disclosure: I am/we are long HPQ. I wrote this article myself, and it expresses my own opinions. I am not receiving compensation for it (other than from Seeking Alpha). I have no business relationship with any company whose stock is mentioned in this article.