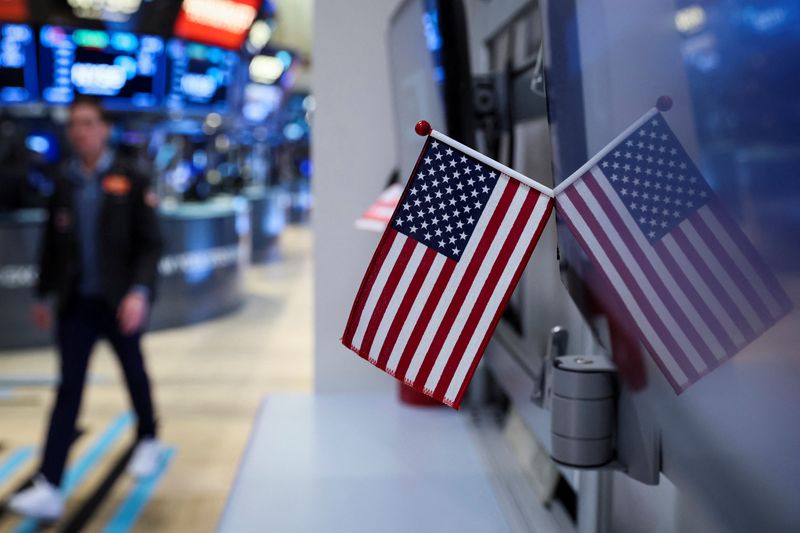 © Reuters. FILE PHOTO: View of the U.S. flag as a trader works on the floor of the New York Stock Exchange (NYSE) in New York City, U.S., March 21, 2022. REUTERS/Brendan McDermid

(Reuters) – U.S. stock index futures edged higher on Monday as a jump in the shares of Twitter and U.S.-listed Chinese firms offset concerns about more sanctions against Russia over its invasion of Ukraine.

Tesla gained 0.8% to lead gains among megacap companies after the electric-vehicle maker reported record deliveries for the first quarter.

Overall, global stocks stalled as investors continued to keep an eye on the Ukraine conflict and signals from the U.S. Federal Reserve on its monetary policy tightening plans.

Germany said the West would agree to impose more sanctions on Russia in the coming days after Ukraine accused Russian forces of war crimes following civilian deaths near Kyiv.

The yield curve between two-year and 10-year bonds stood inverted as a strong jobs report for March last week supported the view that the Fed would aggressively hike rates to tame soaring inflation. An inverted yield curve is widely seen as a signal of incoming economic recession. [US/]

After a dull start to the year, Nasdaq has nearly halved its losses in the last few weeks helped by gains in big growth names and strong economic data. Nasdaq is now down 11.2% from its all-time closing high in November.

JPMorgan Chase & Co (NYSE:) slipped 0.6% after boss Jamie Dimon warned that the bank could lose about $1 billion on its Russia exposure.

Starbucks Corp (NASDAQ:) fell 2.2% after former CEO Howard Schultz announced the suspension of the company’s stock repurchasing program, as he returns this week to lead the global coffee chain for the third time.

© Reuters. By Sam Boughedda Investing.com — Hyundai Motor Co ADR (LON:) has entered into an agreement with the State of Georgia to build its first dedicated fully electric vehicle and battery manufacturing facilities in the […]