The Euro weakened this past week, leaving prices at a precarious position amid Russia-Ukraine geopolitical risks. A strong US inflation report, where CPI clocked in at another 40-year high for January, also pressured EUR/USD lower. Odds of a 50-basis point rate hike from the Federal Reserve at the March meeting soared. There is even rising speculation that the central bank could deliver an emergency rate hike before then. Below is a Twitter poll I conducted about the matter, and it seems people are evenly split on the idea.

Euro Week Ahead – Geopolitical Risks and an Increasingly Hawkish Fed, ECB on the Sidelines

One-week EUR/USD implied volatility is at its highest since the middle of December after reports crossed the wires last Friday that US intelligence hinted that Russia could invade Ukraine this coming week. The single currency could be vulnerable to a rapid selloff if tensions between the two countries continue escalating.

Markets do not like uncertainty, and the possibility of an invasion destabilizing European politics and economic dynamics could see traders flocking out of the single currency. Crude oil prices are also surging amid supply disruption concerns between the west and Russia, where the latter is also a key player in OPEC+. Higher oil prices may also be a conundrum for the European Central Bank (ECB).

ECB President Christine Lagarde has spent most of her time downplaying increasingly hawkish expectations since the central bank’s February monetary policy announcement. That resulted in a brief 2-day surge in the Euro earlier this month. Even one of the more dovish central banks has started to acknowledge the global rise in inflation.

Still, the ECB Chief noted that if the central bank ‘acts too fast now, the recovery could be weaker’. She may reiterate similar commentary at a European Parliament debate on Monday. That may further undermine the Euro. Traders will also be keeping an eye on Eurozone GDP and industrial production data. ECB Chief Economist Philip Lane will also be speaking this week.

Traders should also keep an eye out for incoming FOMC minutes, which could echo the increasingly hawkish rhetoric from the central bank. That could spell trouble for market sentiment and offer a push to the US Dollar, leaving the Euro vulnerable. Cleveland and St. Louis Fed presidents Loretta Mester and James Bullard will also be speaking, respectively. 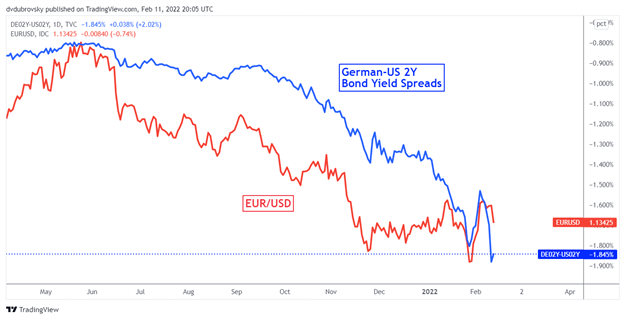 Eoneren A paper recently came out in Science magazine that has great importance for Anavex Life Sciences Corp. (NASDAQ:AVXL) and other Alzheimer’s Disease (“AD”) drug developers that are not working with the amyloid plaque hypothesis. […]

ArLawKa AungTun/iStock via Getty Images Investment Thesis Vacasa (NASDAQ:VCSA) is a rental management platform. Unquestionably the crown jewel of this business is that it oozes free cash flow. The business gets cash upfront via deferred […]