EUR/USD fails to defend the 2020 low (1.0340) as it tumbles to a fresh yearly low (1.0161), and the exchange rate may fall towards parity as the Relative Strength Index (RSI) pushes into oversold territory for the fourth time this year.

EUR/USD Falls Toward Parity as RSI Pushes into Oversold Territory

EUR/USD is back under pressure after testing the 50-Day SMA (1.0548) during the previous week, and the exchange rate may continue to track the negative slope in the moving average as the RSI shows the bearish momentum gathering pace.

The move below 30 in the RSI is likely to be accompanied by a further decline in EUR/USD like the price action seen earlier this year, and the weakness in the exchange rate is likely to persist as long as the oscillator holds in oversold territory.

As a result, EUR/USD may continue to trade to fresh yearly lows even though the European Central Bank (ECB) plans to implement higher interest rates later this month, and it remains to be seen if the Governing Council will adjust the forward guidance for monetary policy as Vice-President Luis de Guindos warns that “a gradual but sustained path of further increases in interest rates will be appropriate” while speaking at the Frankfurt Euro Finance Summit.

The comments suggest the ECB could step up its effort to combat inflation as Vice-President Guindos insists that “the size of the interest rate increase in September will depend on the updated medium-term inflation outlook,” and it remains to be seen if the Governing Council will layout a more detailed exit strategy at its next interest rate decision on July 21 as the central bank struggles to achieve its one and only mandate for price stability.

Until then, EUR/USD may face headwinds as the Federal Reserve is widely expected to deliver another 75bp rate hike in July, while the tilt in retail sentiment looks poised to persist as traders have been net-long the pair for most of 2022.

The IG Client Sentiment report shows 72.42% of traders are currently net-long EUR/USD, with the ratio of traders long to short standing at 2.63 to 1.

The number of traders net-long is 1.19% higher than yesterday and 20.06% higher from last week, while the number of traders net-short is 9.66% higher than yesterday and 11.50% lower from last week. The rise in net-long interest has fueled the crowing behavior as 68.51% of traders were net-long EUR/USD last week, while the decline in net-short position comes as the exchange rate trades to a fresh yearly low (1.0161).

With that said, EUR/USD may attempt to test the December 2002 low (0.9859) as the RSI pushes into oversold territory, and the weakness in the exchange rate is likely to persist as long as the oscillator holds below 30. 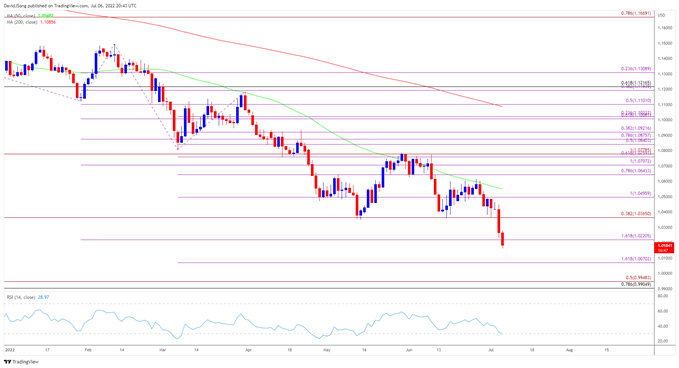 JHVEPhoto CNA Financial (NYSE:CNA) recently released its second-quarter results. Although the company was affected by the increase in the interest rates and the equity market drop, which affected both book value and fair value of […]