In FX markets, the Australian, New Zealand and US Dollars largely outperformed, while the British Pound lost ground ahead of the upcoming Bank of England interest rate decision. Gold and silver prices slid lower as yields on US 10-year Treasury yields held just shy of 11-month highs.

Looking ahead, the aforementioned BoE interest rate decision headlines the economic docket alongside jobless claims data out of the US.

The Bank of England upcoming monetary policy meeting will be keenly eyed by investors to determine the central bank’s view of the path forward for the local economy and whether or not a negative interest rate policy will be enacted this cycle.

A review conducted by the Prudential Regulation Authority (PRA) is expected to shed some light on the impact that negative rates may have on the banking sector, with a conclusion that banks could ultimately cope possibly resulting in the BoE lowering its estimate for the effective lower bound (ELB).

However, this does not necessarily imply that the central bank will cut rates into negative territory imminently. Indeed, Governor Andrew Bailey warned that such a policy may cause more harm than good, stating that “the transmission is much less clear because it does change the whole calculus of how the banking system works”. 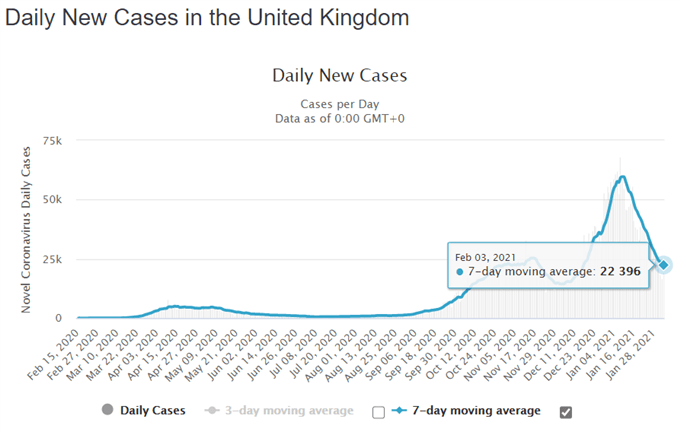 Moreover, with coronavirus cases falling rapidly, and more than 15% of the entire UK population having received at least one vaccination dose, the need for additional stimulus may not be as dire as once thought. Economic data has also been surprisingly upbeat, with both the manufacturing and services PMI release for January exceeding consensus estimates.

That being said, Bailey also reiterated that “in simple economics and maths terms, there is nothing to stop” the central bank from utilizing negative rates in the future. Nevertheless, the British Pound could gain ground in the near term if the BoE talks down the possibility of additional rate cuts. 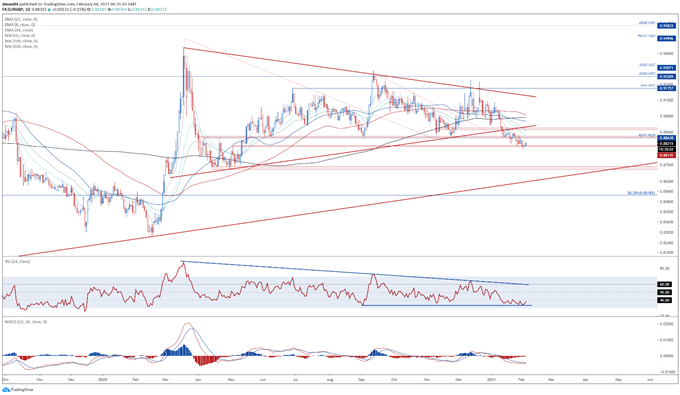 The technical outlook for EUR/GBP rates remains tilted to the downside, after the exchange rate collapsed below key range support at 0.8865 – 0.8875 to its lowest levels since May of 2020.

However, a bullish crossover on the MACD indicator, in tandem with bullish RSI divergence, suggests prices may reverse higher.

Clearing the 8-day exponential moving average (0.8836) could open the door for buyers to probe range resistance, with a daily close above needed to bring the January 18 high (0.8925) into focus.

Alternatively, a daily close below psychological support at 0.8800 would probably signal the resumption of the primary uptrend and carve a path to challenge range support at 0.8670 – 0.8690. 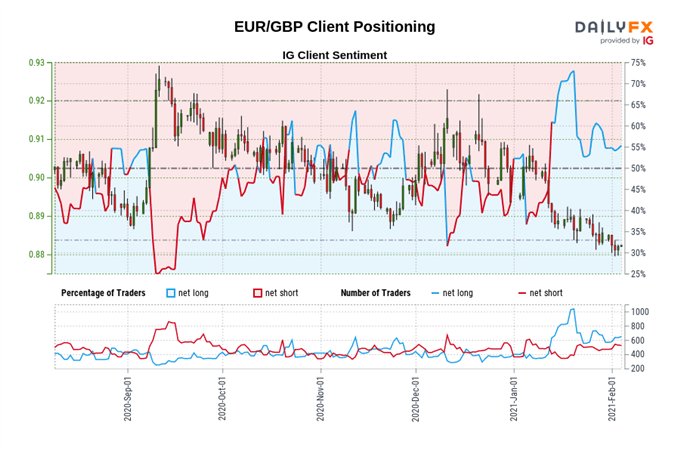 We typically take a contrarian view to crowd sentiment, and the fact traders are net-long suggests EUR/GBP prices may continue to fall.

Positioning is more net-long than yesterday but less net-long from last week. The combination of current sentiment and recent changes gives us a further mixed EUR/GBP trading bias.