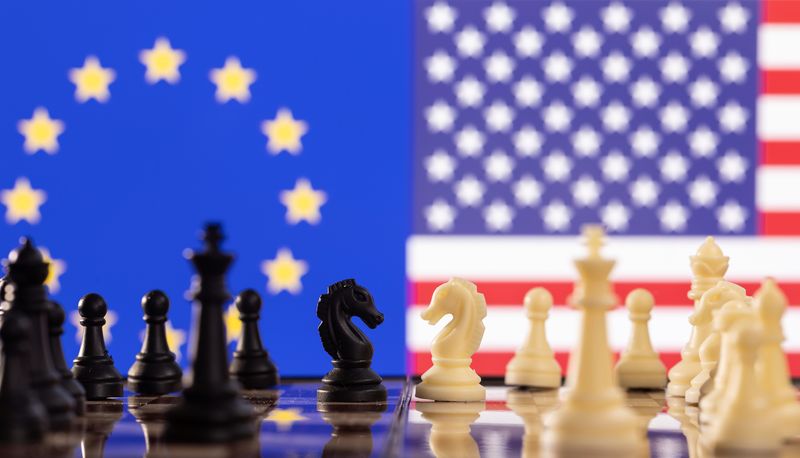 © Reuters. Chess pieces are seen in front of displayed U.S. and EU flags in this illustration taken January 25, 2022. REUTERS/Dado Ruvic/Illustration

LONDON (Reuters) – The European Union said on Monday it has widened access for U.S. exchanges and clearing houses to investors in the bloc, a move which contrasts with Brussels’ intention to shut off clearing houses in London in 2025.

The EU’s executive European Commission said a number of exchanges in the United States which trade derivatives and are supervised by the U.S. Securities and Exchange Commission can now be used by investors from the EU.

“These decisions are in the interest of the EU – we want our capital markets to be better integrated with other international markets,” EU financial services commissioner Mairead McGuinness said in a statement.

“We look forward to continued good cooperation between the EU institutions and agencies and the US Securities and Exchange Commission,” McGuinness said.

The bloc’s securities watchdog ESMA will proceed with the technical work needed to implement the decisions.

McGuinness has said that clearing houses in Britain, which has left the EU, won’t be allowed to continue serving customers in the bloc after June 2025 under the same “equivalence” system that she granted to U.S. clearers and exchanges on Monday.

Brussels has said it wants to end the bloc’s heavy reliance on derivatives clearers in London.