Equinox Gold (NYSEMKT:EQX) released its Q4 financial results. It is most probably the last quarter not impacted by the transformative merger with Leagold Mining (OTCQX:LMCNF). Equinox confirmed its positive momentum and reported another quarter of strong production growth. The financial situation of the company improved, too.

Equinox’s revenues increased to $119 million, or by 29.5% quarter-over-quarter. The operating cash flow improved as well, however, not as impressively. It climbed up to the $38.9 million level, which is Equinox’s new quarterly record high. The net income was negative $8.5 million. It is a significant decline in comparison to net income of $8.1 million recorded in Q3. However, the number was negatively impacted especially by a non-cash loss of $26.8 million, related to change in fair value of its derivative liability. Adjusted Q4 net income equals $20.9 million. The Q4 EPS equals $-0.08 and adjusted EPS equals $0.18. 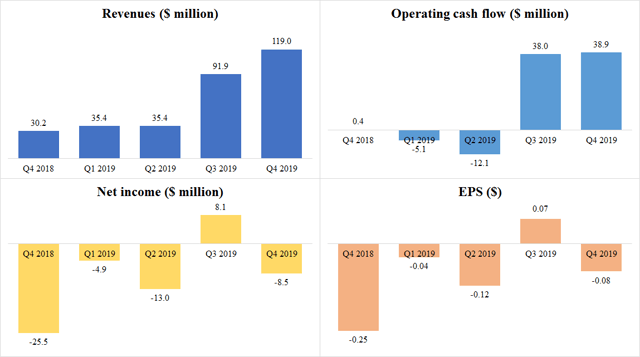 Equinox’s cash position improved notably in Q4. As of December 31, it held cash, cash equivalents and short-term investments of $68.7 million. It means a 47% growth quarter-over-quarter. Although the total debt increased, the increase was only negligible. From $263.4 million to $265.4 million. As a result, Equinox’s net debt declined by more than 9% to $196.7 million. The net debt declined, although Equinox keeps on investing in the development of its assets, especially in the Castle Mountain mine construction.

The most important event that occurred during Q4 was the announced merger with Leagold Mining. The newly created company will keep the name Equinox Gold and it will be 55%-owned by the current Equinox shareholders and 45%-owned by the current Leagold shareholders. The Leagold shareholders will receive 0.331 Equinox shares per 1 share of Leagold. The new Equinox should produce 700,000 toz gold in 2020 and more than 1 million toz gold in 2022. The merger has been already approved by shareholders of both companies and also by the authorities. It should be completed next week. 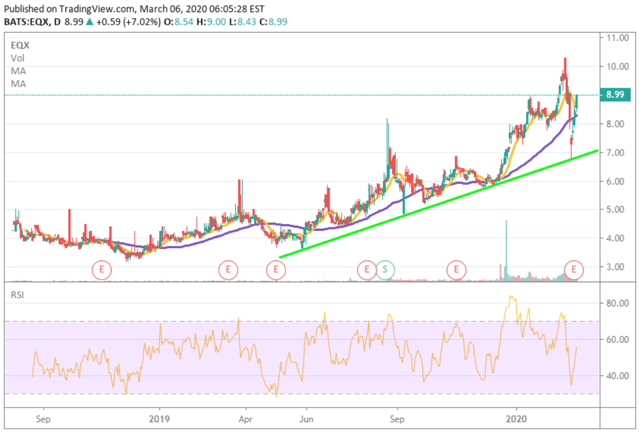 As can be seen in the chart above, last week, Equinox’s share price dived along with the broader stock market and the gold price. However, this week, the gold price recovered from the steep February 28 decline. And Equinox was able to erase the majority of losses achieved last week. The decline helped to cool down the RSI, which needed only several days to move from the overbought nearly to the oversold levels. Right now, it is back in the high 50s. The chart above also shows that the longer-term upwards trend is still valid. The late February share price decline was stopped at the support trend line. Although the share price declined below the 10-day as well as the 50-day moving averages, it managed to return back above them pretty quickly. Moreover, the slower moving average is still situated above the slower one, which is a bullish sign. The overall technical picture looks good right now. However, further stock and gold market volatility may cause some trouble.

Disclosure: I am/we are long LMCNF. I wrote this article myself, and it expresses my own opinions. I am not receiving compensation for it (other than from Seeking Alpha). I have no business relationship with any company whose stock is mentioned in this article.