The numbers coming out of China seem to imply that it’s going to be deep – on a par with the 2009 Crash numbers. That’s a distinct over-estimate for a couple of technical reasons to do with China and cultural practices.

Those same reasons then go on to show that it’s going to be short in terms of economic effect. For we have the other measure of China’s PMI, the Caixin one, the short term effect being something they emphasise in that release.

The meaning of this for us as investors is firstly, don’t panic. Then, be on the look out for the markets to overshoot on the down side thus giving an opportunity to buy in cheaply.

There are a couple of different purchasing managers indices for China. This one is the official one, from the state statistical agency. We get the private sector one a couple of days later. This official one is showing, apparently, the economy falling off a cliff in February:

The manufacturing purchasing managers’ index plunged to 35.7 in February from 50 the previous month, according to data released by the National Bureau of Statistics on Saturday, much lower than the median estimate of economists. The non-manufacturing gauge also fell to its lowest ever, 29.6. Both were well below 50, which denotes contraction.

We’re at about the levels of the depths of 2009 as the entire global economy seemed about to collapse.

That looks, obviously enough, pretty terrible. It’s also a huge over estimate of the actual coronavirus effects. This is not an argument to be running for the hills, nor polishing that shotgun while regarding the cases of tinned beans put by.

We also now have the Caixin – ie private sector – version of this PMI, the results of which are broadly similar. As they should be of course:

At 40.3 in February, the headline seasonally adjusted Purchasing Managers’ Index™ (PMI™) – a composite indicator designed to provide a single-figure snapshot of operating conditions in the manufacturing economy – fell from 51.1 at the start of the year to signal a renewed decline in the health of the sector. Furthermore, it was the lowest PMI reading since the survey began in April 2004.

Don’t quibble about the actual numbers being different – this is clearly the same story being told: 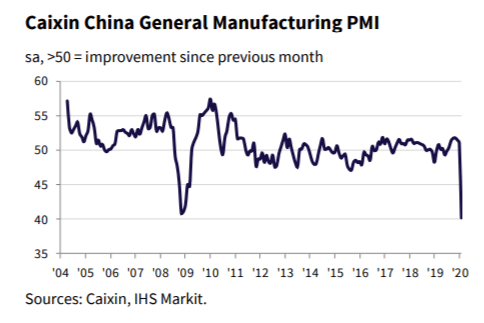 Why it’s not so bad

Yes, there’s an effect here. I’m not trying to say that there hasn’t been a slow down in the Chinese economy. That’s not the point though – economies slow down every Sunday for example. What matters is how long is this going to last?

Which leads us to a couple of things. The first is Chinese New Year. That was on Feb 12 this year. The Chinese economy tends to shut down, pretty much, for a couple of weeks at that point. Everyone – all those migrant workers – goes home to see the family. Work contracts tend to last for a year, this being when they roll over – medieval England used to do something similar around Lady Day (March 25th). It’s routinely observed that this vacation period is the largest migration in history and it happens every year.

Chinese economic statistics tend not to be seasonally adjusted for this process. Because the New Year wanders across Jan and Feb by the Western calendar so it’s difficult to make such a seasonal adjustment. Still, this is clearly larger than that effect.

Except, well, not quite so much. Because the close downs ordered by the government in order to contain and quarantine. They’ve been coincident with this closedown that would already happen anyway. There have been extensions of them that is, rather than close downs happening that wouldn’t at all. One way of looking at – not entirely accurate, sure, but more accurate than thinking that close downs are unprecedented at this time of year – this is simply that the vacation has been extended.

Efforts to contain the recent outbreak of the coronavirus in mainland China weighed heavily on manufacturing sector performance in February. Production, new work and staffing levels all fell at the quickest rates since the survey began nearly 16 years ago as companies extended their usual Lunar New Year shutdowns to help stem the spread of the virus. Supply chains were also hit heavily, with average delivery times increasing at the quickest pace on record, leading firms to increase their use of current stocks.

This is all an extension of the usual Lunar New Year close down. Sure, it’s still a close down, production has still dropped. But it’s still not quite the same as a several week close down of the economy simply because large parts of it would have been closed for substantial parts of that period anyway.

How long will it last?

This is the most important part of the question though. How long will this go on for? A fall in production of this sort of level that goes on for months is a very big deal indeed. This sort of fall that lasts a few weeks, over a period when we’d be having factory closings for vacations anyway isn’t a big deal, it’s a blip and one that will be swiftly made back up again.

So, which is it? As ING reports from the official release:

In the press release, the government reported that bigger factories’ resumption of work reached 85.6% as of 25th February.

Note that the fall in the PMI is larger than that 15% of factories still closed. That is, the economy has already made back some of that bad news.

As of Feb. 25, the work resumption rate in NBS surveyed large and mid-sized enterprises nationwide has reached 78.9 percent, and it is expected to climb to 90.8 percent by the end of March, according to the NBS.

We also expect a goodly chunk of the remainder to be over in the next few weeks. That is, this is not a permanent change in the Chinese economy, this is a short term blip.

We also have this from the Caixin version:

However, firms anticipate a recovery in production over the next year due to expectations that production will be ramped up once any coronavirus-related restrictions are lifted. Notably, the degree of positive sentiment was the strongest seen for five years.

Fair enough, that’s hopes and all that. But then that’s what the PMI is really measuring, business confidence. So, despite what our proxy is saying, levels of production this month have fallen, what we’re really trying to measure, confidence, is high.

We have, that is, a blip, a burp, in the economy not the start of some descent into a deep valley. There is also this from the IHS email accompanying the release:

The negative effects, however, are expected to be temporary. Encouragingly, panel comments from the survey showed Chinese firms anticipating the difficult situation faced by the sector to be temporary. In fact, the level of confidence, as measured by the Future Output Index, rose to the highest for five years in February. This optimism was supported by positive developments in the last week of February (Caixin PMI data were collected 11-21 Feb), where industrial production continued to resume work and infrastructure projects gradually restarting.

The current situation is expected to improve as soon as in March with an increasing number of manufacturing enterprises resuming work.

Don’t get me wrong. I agree there’s been that slump. I’m not saying that coronavirus and its economic effects are a nothing. I am saying that they’re going to pass and pass quickly. This is the Chinese experience and that tells us two things. Firstly, that Chinese influence upon the global economy will soon be back. But more importantly, as and when (OK, if) the other economies get hit with the coronavirus then we can expect the same thing to be happening to them. Sure, a hit, disruption. But it’ll all be short term.

Yes, coronavirus is important as diseases are important. However, we’re here seeing that even at the epicentre the economic effects aren’t that large. January’s numbers were still expansionary. February’s obviously not, but March’s will be expansionary on February’s. We’re seeing a short term close down – in China coincident with the annual one – which isn’t as big a problem as many seem to be assuming.

We’re getting close to a market over reaction to these events.

The more we see from China about the economic effects the more I am confirmed in my views. Yes, of course there’s an effect. But it’s a short term one. 12 and 15% falls in market indices are, to my mind, too strong a reaction. And anything over 20% is definitely going too far. So, my opinion is that if we see such falls they’re to be seen as buying opportunities. Opportunities to buy into the big dividend paying stocks at better multiples, better yields.

2/2 © Reuters. FILE PHOTO: The logo of Amazon is seen at the company’s logistics center in Bretigny-sur-Orge, near Paris, France, December 7, 2021. REUTERS/Gonzalo Fuentes 2/2 By Lisa Baertlein and Richa Naidu LOS ANGELES/CHICAGO […]