Delta Air Lines (DAL) sat out of the stock market’s massive rally on Monday. (An attempted rally on Tuesday also fell flat.) The news that Berkshire Hathaway (BRK.A) (BRK.B) sold a portion of its stake in the airline last week likely drove this underperformance.

At this point, it’s impossible to know why Warren Buffett decided to pare back his conglomerate’s stake in Delta, or whether the sales reported last week are just the first step towards exiting the position entirely. Nevertheless, the mere possibility that the long-term-oriented Buffett has lost confidence in the airline industry (and this airline in particular) has understandably added to investors’ worries.

However, I continue to see Delta as one of the better-positioned airlines. Near-term bankruptcy risk is low, and the airline (unlike some of its peers) is likely to return to profitability next year, even though travel demand is expected to remain well below 2019 levels. Moreover, I expect Delta Air Lines’ adjusted pre-tax margin to fully recover by 2023, while its above-average profitability should enable it to pay down debt accumulated this year relatively quickly.

The cost of COVID-19 will be manageable

Earlier this week, Seeking Alpha contributor Ian Bezek urged investors to steer clear of airline stocks, including Delta Air Lines. (If you have time, I recommend that you read his article to get a contrasting bearish perspective on the company.)

Delta disclosed last week that it is currently burning more than $60 million of cash on a daily basis: roughly $2 billion per month. Bezek noted that this implies it is wiping out a year of “boom” profits from the 2015-2019 period every two months. Alternatively, Delta is burning through $1 per share every 11 days or so. The implication is clear: even if you believe that Delta’s earnings power will fully recover in a few years, the company’s 2020 losses will be so massive that it would negate the value of its potential future profits.

However, I believe this is a fundamental misreading of the situation. Delta will undoubtedly incur substantial losses in 2020, but they won’t be nearly big enough to justify the roughly $25 billion that has been knocked off the airline’s market cap since January.

First, Delta is eligible for payroll protection grants under the CARES Act. It has already applied for these grants, and I expect it to receive roughly $5 billion for the period from April to September. This would cover a substantial proportion of its recent cash burn.

Bears might counter that Treasury Secretary Steve Mnuchin has said he will demand equity compensation from the airlines. Based on Delta’s recent share price, $5 billion of equity would give the government about a quarter of the company. However, airline unions and many Democratic lawmakers have called on Mnuchin to offer more palatable terms, to avoid turning the grant conditions into a poison pill. Indeed, if the terms amount to issuing equity at the depressed market price prevailing now, Delta might opt for furloughs and additional private-market debt financing instead. In the end, I expect dilution of 10% or less.

Second, 20%-25% of the cash losses that Delta is currently experiencing will be available to offset future tax bills (as NOLs). Thus, Delta’s recent daily cash burn of $60 million-plus would be a little less than $50 million on an after-tax basis.

Third, Delta’s losses will slow as it pares back its schedule. Last week, Delta said its April schedule will be at least 80% smaller than initially planned. There will still be a mismatch between capacity and demand, but not as much as what has existed in recent weeks. Indeed, just four weeks ago, Delta was planning a comparatively modest 15% capacity cut. That made sense at the time; as of March 9, passenger throughput at TSA checkpoints was down “only” 20% year over year. However, by March 19, throughput was down 75% and by March 26 it was down 92%. 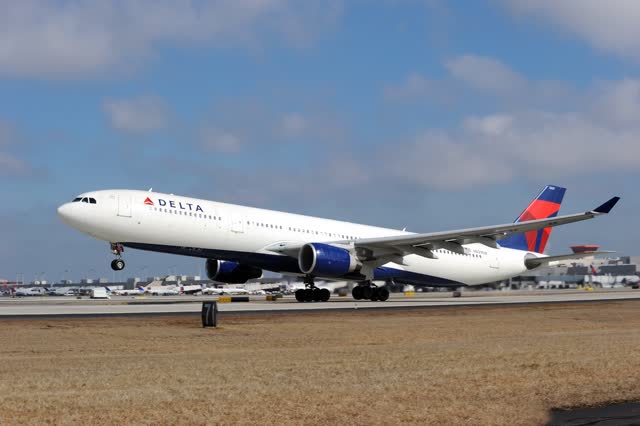 Fourth, daily cash burn of $60 million does not imply daily operating losses of $60 million. Ticket refunds are creating a significant short-term working capital drag for airlines. For example, JetBlue Airways (JBLU) said last week that cash refunds have outpaced ticket sales by $1 million a day recently. Delta’s cash burn is being exacerbated by both refunds and the fact that what little travel has occurred in recent weeks mainly related to tickets booked (and paid for) prior to mid-March.

All in all, the actual after-tax losses (excluding any potential one-time writedowns) may average about $20 million a day for the next 2-3 months, tapering off thereafter as air travel demand starts to return. (This assumes, of course, that Delta does receive roughly $5 billion of payroll grants over the next 6 months.) This scenario would be consistent with full-year after-tax losses of roughly $3 billion-$5 billion excluding special items. While that would be a big setback, it doesn’t come close to justifying the decline in Delta’s stock price.

Delta entered 2020 with just $2.9 billion of cash and cash equivalents on its balance sheet, along with a similar amount of receivables. Based on the airline’s recent burn rate (and the substantial potential refund liability associated with its $5.1 billion of advance ticket sales), this was clearly inadequate.

Fortunately, Delta has maintained a solid balance sheet in recent years. It ended 2019 with $11.2 billion of debt and $6.1 billion of lease liabilities. Considering that it owns more than 700 aircraft and also has airport slots, international route authorities, and other assets that can be used as collateral, its borrowing capacity is substantially higher. 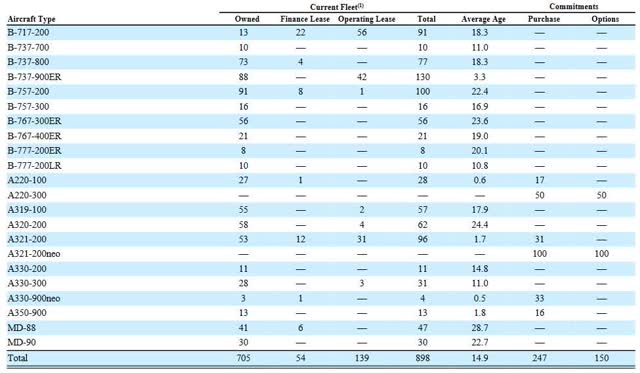 Indeed, during March, Delta borrowed $3 billion from its existing revolving credit facilities and another $2.6 billion from a new 364-day secured term loan facility that it arranged a few weeks ago. Thanks to these financing moves, Delta likely exited the first quarter with at least $7 billion of cash and equivalents.

This cash cushion is probably enough to get Delta through the rest of 2020. Between capacity cuts, payroll support grants, and other self-help initiatives, daily cash burn is likely to slow to $30 million or less within a couple of weeks and continue declining as booking activity starts to resume (however tentatively). The new term loan can potentially be expanded to $4 billion, providing an additional source of cash. And if necessary, there are plenty of unencumbered assets left to support additional borrowings. Thus, liquidity concerns don’t justify a massive markdown for Delta Air Lines stock.

Profit will bounce back

The other potential justification for the massive drop in Delta Air Lines’ market cap is the belief that airlines will never again be as profitable as they were for the past 5-7 years. I don’t find that argument convincing, though: especially for Delta.

As I described late last month, Delta is unusually well positioned for a scenario where demand takes a few years to return. It entered 2020 with 77 aging MD-88s and MD-90s that are likely to be permanently retired this spring. That will remove complexity, boost fuel efficiency, and reduce future maintenance costs. The carrier also has more than 100 Boeing (BA) 757s, Boeing 767s, and Airbus (OTCPK:EADSY) A320s that were built in the early-to-mid 1990s, are fully paid off, and are good candidates for early retirement. 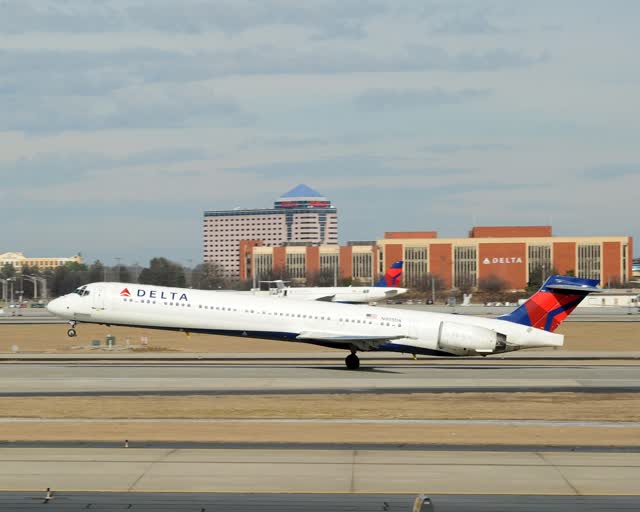 Thus, Delta could shrink its mainline fleet by 20% just by retiring jets that should be retired soon anyway. Furthermore, it has room to cut capacity in its biggest hubs (especially Atlanta, where it operates the largest airline hub in the world) without significantly weakening their competitive positions. Meanwhile, Delta has numerous focus cities and smaller coastal hubs that tend to be less profitable than its interior hubs and could be downsized or turned back into spokes.

This ability to shrink while maintaining its competitive strengths and simplifying its fleet means that Delta has a good chance of returning to profitability in 2021, even if demand is down 20% or so relative to 2019.

The weak near-term demand environment will also force Delta and other airlines to get much more aggressive about cutting costs. This will add to the savings from (eventually) replacing the 1980s and 1990s models being grounded today with next-generation, ultra-fuel-efficient jets. The resulting cost savings could help Delta’s profit recover quickly as air travel demand returns to growth beyond 2021.

Finally, Delta Air Lines’ lucrative credit card partnership with American Express (AXP) will drive strong earnings growth over the next three years. Luckily for Delta, the airline extended its agreement with AmEx through 2029 a year ago, when it had very good negotiating leverage. Delta is American Express’ most important partner by a long way: more than 20% of the credit card giant’s card member loans are associated with Delta co-brand cards.

Delta’s management expects revenue from the AmEx relationship to soar to nearly $7 billion by 2023, up from just $1.4 billion in 2010, $3.4 billion in 2018, and $4.1 billion last year. To the extent that the aftermath of the COVID-19 pandemic negatively impacts spending on Delta co-brand cards, the ultimate 2023 revenue contribution could be somewhat smaller. But a significant portion of the expected growth relates to getting better terms from American Express, rather than volume growth. Even a $6 billion revenue contribution from the partnership in 2023 would be strongly margin-accretive. 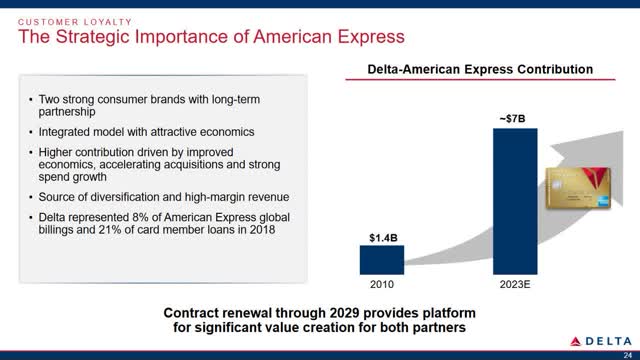 Between the incremental profit from the American Express relationship and the efficiency gains from fleet upgrades and general cost-cutting, Delta will likely equal or exceed its 2019 adjusted net income of $4.8 billion ($7.31 per share) by 2023. Even after factoring in some potential dilution related to the payroll grants, Delta’s EPS could rebound to between $6 and $8, if not higher.

Furthermore, with 2020 losses likely to be limited to $5 billion at worst, and dividends and share buybacks off the table until at least late 2021 (and probably 2022 or 2023) Delta Air Lines should be able to repay the debt incurred this year within 2-3 years.

There is one big risk factor to be aware of. If the U.S. is unable to keep COVID-19 under control with a combination of heightened sanitary procedures, widespread testing, and contact tracing, the country could be forced to implement multiple rounds of social distancing stretching well into 2021. That could cause air travel demand to remain at least 70% below 2019 levels next year, causing Delta (and other airlines) to continue burning through cash.

Even in that scenario, I think Delta would be able to survive by maxing out its borrowing capacity, renegotiating contracts, cutting capacity to the bone, and furloughing all non-essential workers. Nevertheless, it could take a very long time to dig out of the resulting debt pile. By contrast, if air travel demand starts to recover in the second half of 2020 and returns to 2019 levels by 2023, Delta Air Lines stock will almost certainly prove to be a steal at its recent price of approximately $22.

If you enjoyed this article, please scroll up and click the follow button to receive updates on my latest research covering the airline, auto, retail, and real estate industries.

Disclosure: I am/we are long DAL, JBLU. I wrote this article myself, and it expresses my own opinions. I am not receiving compensation for it (other than from Seeking Alpha). I have no business relationship with any company whose stock is mentioned in this article.