Crude oil prices retreated from recent highs during Wednesday’s APAC session as enthusiasm surrounding stimulus-backed reflation hopes cooled among oil traders. WTI has surged more than 11% over the last 7 trading sessions, now appearing to be technically overbought. The Biden Administration is pushing through a US$ 1.9 trillion fiscal stimulus plan that aims to revitalize growth and pull the economy out from the pandemic. This has raised prospects for the energy demand outlook as more households will receive stimulus payments to spend. Meanwhile, the rollout of Covid-19 vaccines has effectively tackled down the number of new infections, with the 7-day average of cases in the US falling to 111k on February 8th, compared to January’s peak of 300k.

Surging oil prices appeared to have priced in too much of optimism and led market participants to question the sustainability of this rally. While WTI prices surpassed the pre-Covid perch, energy demand appears to be far from returning to the pre-pandemic level. Travel activity, for example, is still suppressed by lockdown measures and border restrictions. According to data compiled from Flightrader24, global daily flight counts are till below the pre-Covid levels. (chart below). Recent 7-day moving average of daily flight counts are 24% and 19% below the same period in 2020 and 2019 respectively. This reflected a tepid recovery in fuel demand. 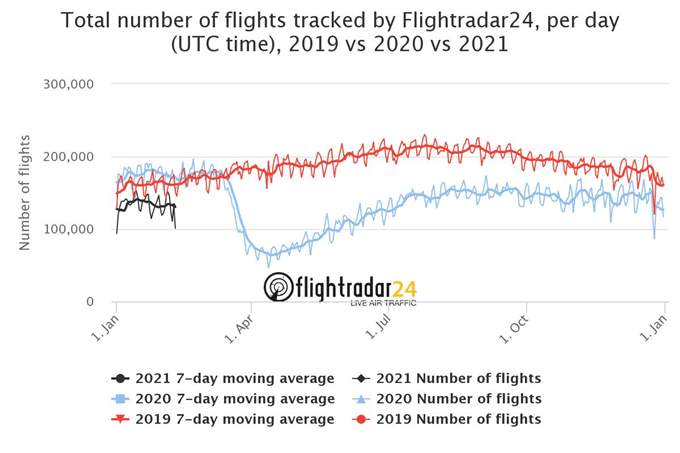 In the longer horizon, a global trend of decarbonization and work-from-home may continue to weigh on fossil fuel demand. More importantly, current price strength is partially attributed to Saudi Arabia’s unilateral 1 million bpd production cut, as well as a general agreement among OPEC+ members to postpone production hikes. With Brent rising above the US$ 60.00 mark, will the oil-producing cartel stay united to rein in on output?

On the bright side, demand for oil is improving as suggested by recent inventory data. Lately, US DOE crude oil inventories have fallen to 475.66 million barrels from a recent peak of 503.2 million barrels seen in early December (chart below). Stockpiles have been falling for 7 out of the past 8 weeks, marking a total decline of 27.5 million barrels. 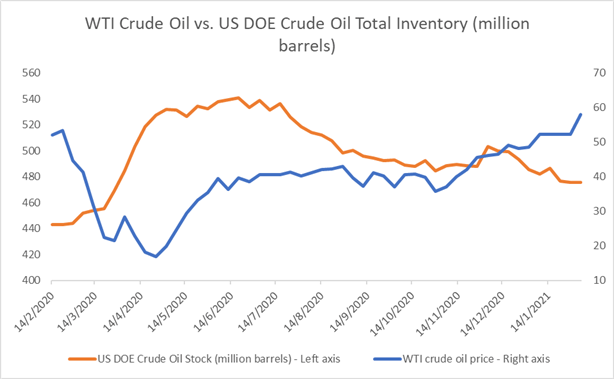 The American Petroleum Institute (API) reported a 3.5–million–barreldrop in US crude inventoriesfor the week ending February 5th, compared to the baseline forecast of a 2.7 million barrel decline. A larger-than-expected inventory drop, alongside a weakening US Dollar, may serve to underpin oil prices in the near term.

Similarly, the EIA will release the DOE crude oil inventory data on February 10th, in which markets foresee a 0.80 millionbarrel drop in stockpiles after a 0.99 millionbarrel decline prior. Falling US crude inventories recently reflect a pickup in demand as economic growth gains momentum. WTI has historically displayed a negative correlation with inventories, with a 12-month correlation coefficient of -0.478 (chart below). 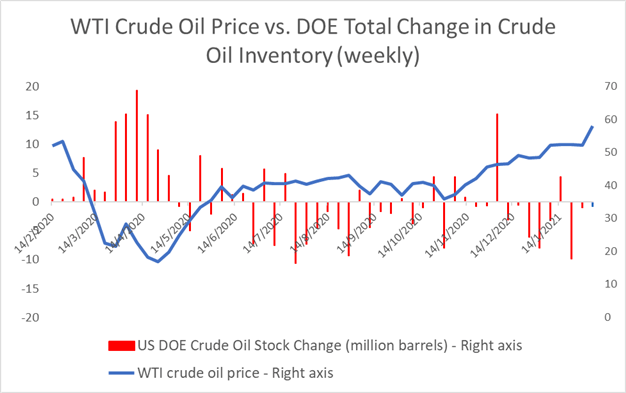 Technically, WTI advanced more than 11% over the past 7 trading sessions, rendering it vulnerable to a correction. The RSI indicator showed signs of overbought and suggested that the price may be due for a technical pullback. The overall trend remains bullish-biased as suggested by upward-sloped Simple Moving Average (SMA) lines. An immediate resistance level can be found at US$ 58.75 – the 200% Fibonacci extension. 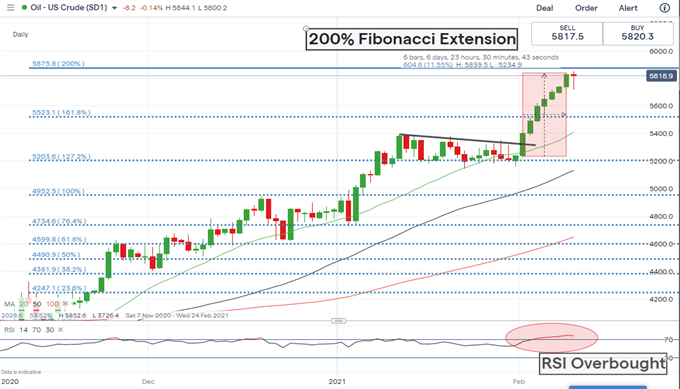