Prices rose as trade got under way, reportedly as investors hoped to see more filling of strategic petroleum reserves. However, even given this month’s production-cut agreement from the Organization of Petroleum Exporting Countries and allies including Russia, prospects for demand look awful with the spread of coronavirus now all-but certain to prompt a global recession.

The International Monetary Fund has predicted that the global economy could shrink by 3% this year, due to the pandemic. If so it’ll be the worst downturn seen since the Great Depression.

US crude oil and gasoline stocks all rose sharply last week according to data from the American Petroleum Institute released on Tuesday. Crude inventories were up by 13.1 million barrels, far more than the eleven billion expected.

Official data from the Department of Energy is coming up later Wednesday.

Gold prices began the day with losses as some investors clearly opted to take profit on this week’s gains. However prices crept up again as the session went on, with those same recession worries clearly underpinning the metal’s haven bid.

Overall risk appetite was less clearly defined, with Asian stock markets hovering around their opening levels although most nursed modest losses as the afternoon’s trade picked up.

Huge production cuts have failed to provide prices with a meaningful lift and now demand fears have put the bears back in charge.

The current range base of $26.61 is under clear threat and a daily close below that point could well see the lows of March in play once again. This will no doubt prove a dispiriting sight well beyond the energy market, even if some will see lower prices as a boon in these difficult economic times.

The broader downtrend looks safe enough, and will remain so while resistance derived from it at $29.35 remains unchallenged. 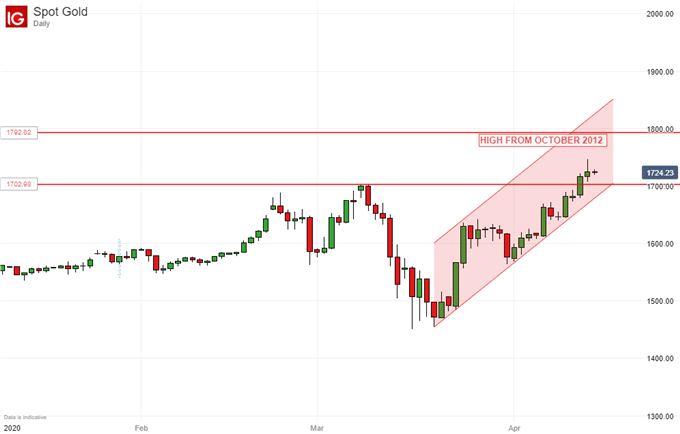 The overall daily chart uptrend channel continues to be respected although it remains notable that the market is confined to repeated lower boundary tests rather than any attempt to break the upper limit. That hasn’t been tried since March 23.

Still, the market looks well supported and consolidation close to current levels probably wouldn’t cause the bulls too much anxiety. The next major resistance point remains quite a long way above the market though, at the highs of October 2012 in the $1792 region.