I believe CK Hutchison (OTCPK:CKHUY) warrants investor attention at current valuations. For one, CKH’s defensive business mix positions it well to weather the current macro storm. While FY20 prospects are downbeat, I still see a flattish dividend per share (DPS) scenario for FY20 as the group looks to shore up free cash flows through stricter capex allocations. Yet, the stock currently trades at a massive ~60% discount to book, suggesting most of the bad news has likely been priced in at this point. Thus, at current levels, I believe the market is significantly underestimating CKH’s resilience amid the uncertain macro backdrop. Key positive catalysts, in my view, include value unlocking from the pending telco business reorganization exercise, as well as the planned separation of its property business.

As a result, the mixed performances across the group was largely expected. On the retail front, AS Watson posted +8% YoY EBITDA growth (pre- IFRS 16 implementations) for FY20 in local currency driven by steady store adds (+5% YoY) and steady same-store sales growth (Asia +4% YoY, China +2% YoY and Europe +2% YoY). Such a result, in my view, is commendable achievement amid the impact from the ongoing HK demonstrations to its retail operations in 2H19.

The port division, on the other hand, saw EBITDA grew +3% YoY (pre-IFRS 16 implementations, vs. +7% in 1H19) on slower throughput growth (+2% YoY vs. +4% YoY in 1H19). The European telecom segment (under CKH Group Telecom) was the major earnings driver, booking EBITDA growth of +21% YoY (pre-IFRS 16 implementations), benefiting from the full consolidation of Italy’s Wind Tre.

The positive performance of the retail, port, and telco segment, along with the HK$6.9bn disposal gain of China MediTech, was unfortunately offset by the impairment charge by Husky and lower earnings from the infrastructure segment.

In my view, the European telecom segment will remain the major growth driver for the group in FY20, along with a steady earnings contribution from the ports and infrastructure segment, as retail could be slightly impacted by the forex headwinds, while Husky is expected to take another impairment loss of ~HK$6bn this year.

Well-Positioned to Weather the Covid-19 Impact

Going into FY20, the company is admittedly exposed to key risks such as the Covid-19 outbreak, falling oil prices, and ongoing financial market turmoil. Encouragingly, management has pledged to drive operational efficiency and maintain financial discipline to weather the volatility ahead. Nonetheless, the impact has already been felt, with CKH’s port division recording a slower throughput trend (-7% in YTD March) due to factory and road closures, as well as supply chain disruptions within the region.

Watson China’s revenue also fell 80% from normalized levels in February as 64% of the store base was closed, resulting in a ~90% foot traffic reduction. However, I would point out that the situation has since improved in March, with revenue down only ~25% from normalized levels, with only 4% of the store base remaining closed. The improvement was partly due to the management’s digital investment in the past few years, i.e., the MyStore program, with the company utilizing its WeChat app to maintain communication and engagement with customers. 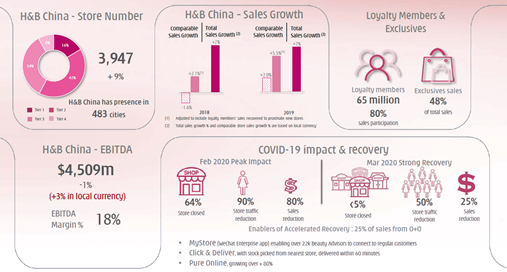 Watson Europe, on the other hand, has not yet been affected, with the division posting double-digit same-store sales growth during the first two weeks of March in the Netherlands (+20%), Poland (+23%), Germany (+20%) and UK (+14%). That the stores are classified as essential businesses in the majority of the European countries allows them to remain open amidst mass store closures in various countries to serve the increasing demand for hygiene, OTC drugs, vitamin, and other daily necessities.

Similarly, CKH’s European telco businesses reported no negative impact thus far, and has instead, benefited from the reduced churn and higher data/voice usage, driving its Jan-Feb revenue above internal budgets.

While I acknowledge that disruptions will eventually be felt in Europe and the Asian region, given that the number of infection cases has yet to peak, I have confidence that the company is relatively well-positioned, given its defensive mix.

Following the FY19 results announcement, the company also declared a final dividend of HK$2.30/share (flat YoY). Added to the interim dividend that has been paid previously of HK$0.87/share, this implies a full-year dividend yield of 6.4%.

On balance, I believe the dividend will likely remain constant at the current payout ratio of 31%. For one, the downside looks minimal, as negative cash flow from CKH’s 40%-owned Husky Energy in FY20 should be offset by the management’s cost reduction initiative that is in place. Further, the company’s diversified mix of businesses remains net cash flow positive, with signs of a recovery emerging in key businesses with China exposure. 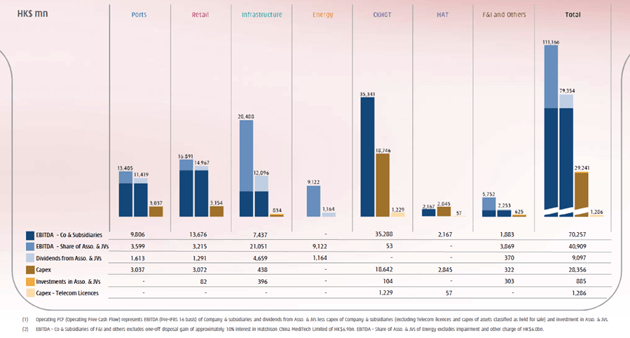 Ample Sum-of-Parts Value to be Unlocked

CKH is on track to completing the spinoffs of its 28.5k telco towers into CK Hutchison Networks (CKHN) by Jun 20, subject to regulatory approvals. This, in my view, should provide the group with a range of value unlocking options (i.e., IPO, outright sales, or M&A). Assuming a <20x EBITDA multiple (in-line with European telco tower peers valuations) to FY20 EBITDA guidance of ~EUR300m, I think CKHN could be worth as much as EUR6.0bn in enterprise value (EV).

CKH’s weak stock price performance YTD, in my view, has been driven by concerns over a wider Covid-19 spread in Europe and Asia. This is understandable, as CKH has greater exposure within these regions, compared to most of the HK-based companies. Nevertheless, the current share price level unfairly penalizes CKH’s diverse mix of businesses, assigning a ~60% discount to book value, with a 7% dividend yield to boot. As such, the recent share price correction appears excessive, in my view, especially given the defensive nature of CKH’s businesses.

Thus, I would be a buyer at these levels, given the highly favorable risk-reward. I take comfort in the company’s proven ability to generate positive cash flow as well as the resilience of its operations through prior downturns. Key re-rating catalysts include a narrowing of the book value discount following the separation of its property business and upside from potential value unlocking opportunities such as the telco tower spinoff.

Key risks include a lower for longer oil price scenario, translating into losses for Husky Energy, currency risk, as well as the regulatory risk with regard to the planned value unlocking initiatives.