We tried to warn you about the long-troubled Chesapeake Energy (CHK). Those who follow energy know that any stock associated in any way with natural gas production has been crushed in the last 12 months, and many weighted toward oil have also suffered in the last two months heavily as oil has cratered to decade lows. We will not rehash the disaster the stock has been, and we do not write this article to gloat, but last year we predicted CHK was heading toward a reverse split. Back in February, we urged you to resist entering the madness that was this penny stock because we felt a reverse split was inevitable, and management telegraphed the ball was in motion to make it happen. Today, that reality has been set into motion following a special meeting.

The bottom line here is that there are so many better places to put your money in this market that all that really is keeping people around is pride. The writing is on the wall and has been in the debt markets. Absent a massive $1.00 rally in natural gas and $25 rally in oil, we really think you are throwing your money away if you invest here. That may sound extreme, but we are so far under $1 and at multi-decade lows that our worst-case prediction is coming to pass – a reverse split. Reverse splits almost always lead to further share price erosion. But the company is doing so to remain listed. In this column, we discuss what’s going on and what we see happening as past frequent traders of this troubled energy play.

Back on the Q4 earnings call, Chief Executive Doug Lawler said plans were being made for a reverse stock split in response to a share price that was at “very low levels.” But why is this happening? Well, aside from the “very low levels,” it is the side effect of the very low prices that you need to be aware of. This is a good learning point for our many followers who do not follow this stock or who are relatively new to the game. Chesapeake trades on the NYSE. The criteria to remain listed on an exchange differs from one exchange to another. On the NYSE, if a security’s price closed below $1.00 for 30 consecutive trading days, then the exchange could initiate a delisting process. Well, since CHK will not let itself go to the pink sheets, we learned today a 1-for-200 reverse split is being put into play.

If we have not been clear already, a reverse split is often a kiss of death. More often than not, it has been our experience that reverse splits are band-aids on failing company stocks. On occasion, they come back to life and rally to be worth more than they were pre-split, but we fear this reverse split would lead to newfound selling and further declines. This is especially true when you consider the immense debt loads and, of course, commodity prices that are the worst they have been in decades.

One positive is share count is reduced. Once effective, the number of outstanding shares of common stock will be reduced from approximately 1.957 billion as of April 10, 2020 to approximately 9.784 million shares (without giving effect to the liquidation of fractional shares).

Another thing that we found positive was that the total number of shares of common stock that the company is authorized to issue will also be reduced from 3,000,000,000 to 22,500,000 shares. Longs should hope that there is not a new issuance, which will lead to more dilution at the newfound price. We think the bond market (when you look at par values and trading values) shows there is so little faith. But if you are still clinging to hope, here is some recent performance to be aware of.

We liked the shift to oil, but prices have collapsed

We will say operationally that we thought it was good news the company has shifted to a larger focus on oil. This was before the prices collapsed. Things are just not looking good. Why invest in a “Hail Mary” with your money? We can bless it only as a gamble. That said, if oil rebounds, it is a good thing. Chesapeake is producing the highest amount of oil that it ever has, and is shifting more and more toward oil and away from natural gas. This is likely wise considering the pricing of the underlying commodities.

We know the company also is reducing capex to save money and is exploring continued asset sales. This is positive. If we go back to Q4, which feels like forever ago, the company delivered fourth-quarter oil production of 126,000 barrels of oil per day and increased oil mix to 26% of total production, the highest percentage in company history. Unclear how Q1 will look, but let us touch on Q4 numbers so you can see where production and revenues were, and understand that these numbers are about to get decimated following Q1.

Performance that we know of

It seems like forever ago, but it was really only 6 weeks ago that Q4 was reported. Sadly, we have to go on this, but it is more for what you need to look for when Q1 and, ultimately, later quarters are reported. Folks, we are in survival mode now.

Long term for the industry, the supply and demand curve needs to improve for companies to survive drastically. Despite constant headlines over production cuts and OPEC+ action, the pricing is terrible. From a proportional standpoint, oil production represented approximately 26%, compared to 19% in the 2018 third quarter.

That is a big positive. However, pricing was a problem, but margins improved. Despite lower average prices for its oil, natural gas and NGL production, Chesapeake’s operating margin increased in the 2019 fourth quarter compared to the 2018 fourth quarter.

It will continue to be a major problem, as in Q1, we all know, pricing has collapsed, bringing survival into question.

We won’t deny it, the reverse split is to keep the company and stock going. You see, Chesapeake Energy is going to pull out all the stops to keep it going. And the stock could rebound, and do so sharply, but it needs oil and gas to rebound.

It is as simple as that. Cost cutting is welcome, but a lot of questions remain. While the company has managed debt, it has a lot of notes due.

Here’s another look at some of the obligations coming due: 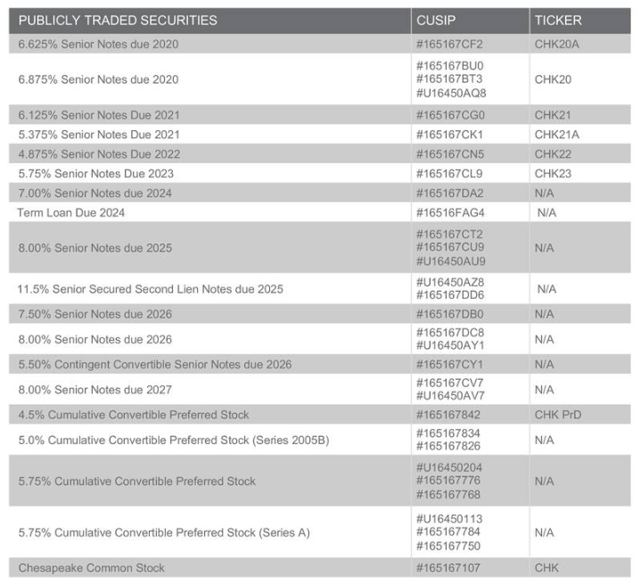 So, those are out there. The spending cuts are a positive sign, but with such massive debt, leverage is not going down enough given there’s a lot of outspending of cash flows in this pricing environment.

On top of that the balance sheet is atrocious. As of December 31, 2019, Chesapeake’s principal amount of debt outstanding inclusive of Brazos Valley debt was approximately $8.916 billion, compared to $8.168 billion as of December 31, 2018. Borrowings have nearly been exhausted, though in December 2019, the company entered into a secured 4.5-year term loan facility for $1.5 billion to finance a tender offer for unsecured notes issued by Brazos Valley and Brazos Valley Longhorn Finance Corp., each a wholly owned subsidiary of Chesapeake, and to fund the retirement of Brazos Valley’s secured revolving credit facility. The debt is still massive.

Avoid this stock, please. The reverse split is a kiss of death. For the desperate longs, we hope we are wrong. Time has been running out for a major rally in energy prices, let us be real. To survive, we believe we need a sizable rally in energy, to the tune of at least $1.00 in natural gas and $25 in oil. Otherwise, we are just kicking the can down the road for Chesapeake with this split, and you can expect further price erosion.

If you like this article, please “Follow” our work, but if you want direct one-on-one guidance, check out BAD BEAT Investing below.

Let us help you navigate this awful market. Get a 50% off discount now

Like our thought process? Stop wasting time and join the community of 100’s of traders at BAD BEAT Investing at an annual 50% discount.

It is simple. We turn losers into winners for rapid-return gains 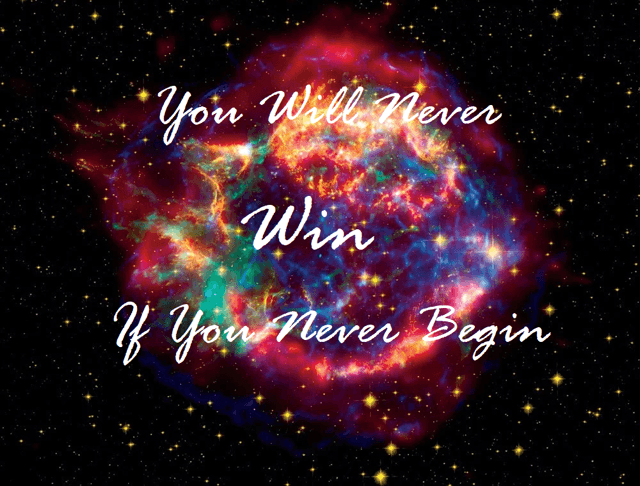