AUD/USD attempts to breakout of the range-bound price action from last week as it comes up against the October high (0.7556), and the Reserve Bank of Australia (RBA) interest rate decision may fuel the recent advance in the exchange rate if the central bank adjusts the forward guidance for monetary policy.

AUD/USD trades to a fresh yearly high (0.7556) as the commodity bloc currencies continue to outperform their major counterparts, and the Australian Dollar may attempt to retrace the decline from the June high (0.7775) as the 50-Day SMA (0.7267) establishes a positive slope.

Looking ahead, the RBA is expected to keep the official cash rate (OCR) at 0.10% in April as the board pledges to “not increase the cash rate until actual inflation is sustainably within the 2 to 3 per cent target range,” and more of the same from the central bank may rattle the recent rally in AUD/USD as the Federal Reserve plans to deliver a series of rate hikes over the coming months.

However, the RBA may prepare Australian households and businesses for a looming shift in monetary policy as Governor Philip Lowe acknowledges that “it is plausible that the cash rate will be increased later this year,” and a shift in the forward guidance may generate a near-term breakout in AUD/USD as it comes up against the October high (0.7556).

In turn, AUD/USD may attempt to retrace the decline from the June high (0.7775), but a further appreciation in the exchange rate may fuel the recent flip in retain sentiment like the behavior seen during the previous year. 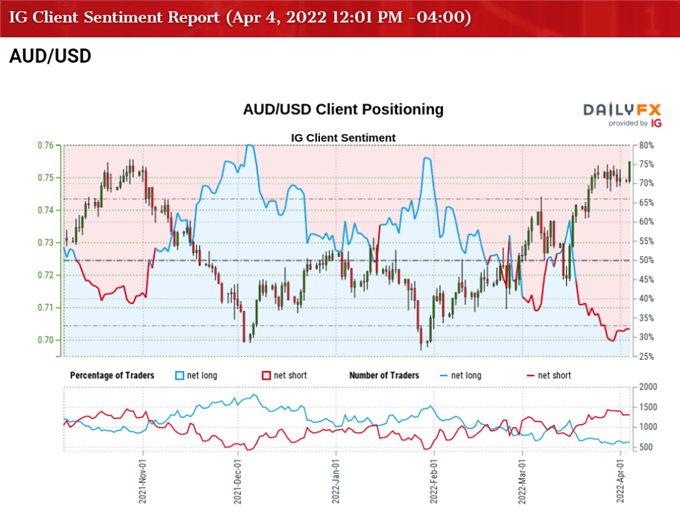 The IG Client Sentiment report shows only 30.56% of traders are currently net-long AUD/USD, with the ratio of traders short to long standing at 2.27 to 1.

With that said, the RBA rate decision may fuel the recent advance in AUD/USD if the central bank shows a greater willingness to switch gears, but failure to clear the October high (0.7556) may lead to a near-term pullback in the exchange rate as the Relative Strength Index (RSI) continues to hold below overbought territory. 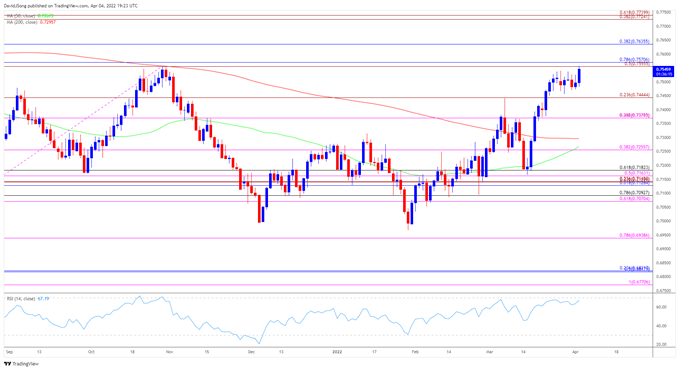