Canada Net Change in Employment Falls Short of the Expectation

As the theme of poor employment data out of the US begins to spill into Canada, March unemployment saw a sharp rise from 5.6% to 7.8% over the previous month. This morning’s print wipes out over a full year of jobs added in the Canadian labor market. 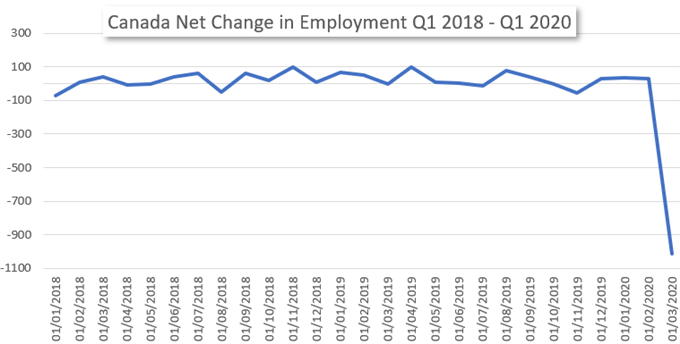 The month ending BOC emergency rate cut from 0.75% to 0.25% came in following several cuts over the previous weeks from 1.75%. Sitting so close to a zero rate of interest, Canada has little room to edge lower before weighing the decision of negative rates. This aggressive monetary easing has not just been in anticipation of a labor market shock, but it has been in response to massive oil price volatility – one of Canada’s primary exports.

Learn how to use Sentiment in your trading strategy

As the Saudi-Russian oil price war has begun taking steps toward a resolution in past weeks, the Canadian Dollar has stabilized. However, this bout of strength may not last as market appetite for risk levels off and demand for safe havens rises. Up next today is University of Michigan Sentiment followed by US CPI tomorrow.