The South African Rand has continued to strengthen against the US dollar in the aftermath of President Ramaphosa’s announcement of the economic reconstruction and recover plan, last Thursday.

The decline in USD/ZAR coincides with a weaker dollar as the US gear up for the presidential elections coupled with the everchanging possibility of a completed stimulus deal before voting day. However, the economic calendar next week could disrupt the current momentum depending on how the market receives the Q3 unemployment data and the mid-term budget speech.

Learn how to prepare for and trade news releases

The weekly chart shows USD/ZAR trading comfortably below the 16.50 mark – a key psychological level, approaching the low created in the week of September the 14th. Trading to this level would represent the lowest USD/ZAR print since March this year and therefore, acts as a crucial level to watch if the current long-term, bearish momentum is to continue. 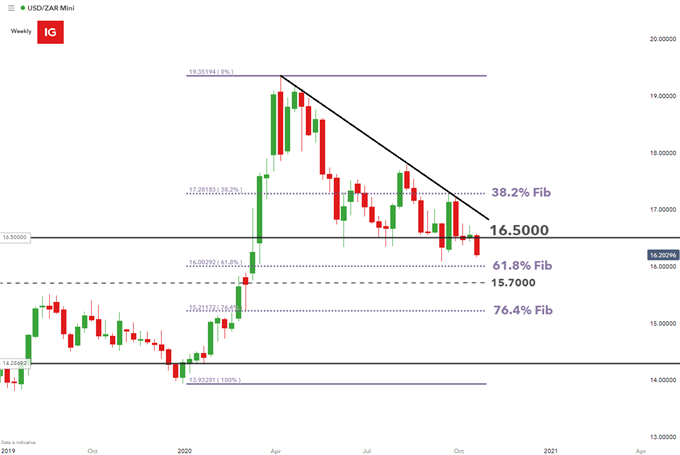 The daily chart reveals a test of 16.08, a previous low, as a break and close below this level may be indicative of continued bearish price action. In this scenario, the next level of support becomes 16.00 which is the 61.8% Fib drawn from the January low to April high. Further bearish momentum would bring into play the 15.70 and 15.21 (76.4% Fib) levels.

Should 16.08 hold, there may be a move up towards 16.50 once more. The first area of resistance is around the 16.30 level, then 16.50 as previously mentioned. Thereafter, 16.55 poses the next level of resistance before a possible test of the descending trendline.

Risk events for the week ahead

Q3 Unemployment Data: Q3 unemployment data is sure to receive a lot of attention as ratings agency, S&P, is due to review the current credit rating for South Africa next month. One of the focal points will be whether the easing of lockdown restrictions has managed to get economic activity moving in the right direction.

Inflation Rate: The current inflation target band stands between 3 and 6 percent and is likely to remain in that band barring any surprises.

Medium-Term Budget Speech: The mid-term budget speech has attracted major attention after finance minister Tito Mboweni requested a one week delay to deliver his speech. Mr. Mboweni has a mammoth task of reporting on the current budget as well as making allowance for the funding requirements for the recovery plan even though the plan seeks outside investment in conjunction with public funding.