This article was highlighted for PRO subscribers, Seeking Alpha’s service for professional investors. Find out how you can get the best content on Seeking Alpha here.

Yext, Inc. (YEXT) helps businesses optimize their online presence so their potential customers can more easily find and buy their products/services. By allowing them to centralize key information, Yext’s cloud-based platform lets businesses easily update landing pages, answer consumer questions, and ensure that messaging is consistent and accurate across outlets. When a fact or event gets updated, the platform automatically edits all of the business’ online messaging to reflect the change.

Investors initially bought into Yext’s “big market promise,” causing shares to be severely overvalued. But current fundamentals are abhorrent; EBIT margin is at an all-time low, EBITDA and net margins have stayed below -25% since the company went public, and Yext’s Altman Z-score indicates financial distress. Despite management’s optimistic comments, insider selling has been rampant during the past three and twelve months. Yext’s business model also lacks a long-term competitive advantage, aka moat, as it simply uses a combination of database management and AI. Equity dilution will likely continue to depress Yext’s share price. Investor sentiment could turn even more negative if Yext revises their 2021 guidance downward to reflect the economic impact of Covid-19, or if Yext loses just one or two key clients.

In the most recent earnings call, Yext CEO Howard Lerman described Q419 as the “best quarter in the history of the company.” 19 days later, he sold 17,164 shares. If management were actually excited for the company’s future, they would happily scoop up shares at these all-time low prices.

Instead, insider selling has been rampant during the past three and twelve months. It appears that, despite their positive rhetoric, management lacks confidence in the company’s intermediate-term outlook. Insiders at Elastic N.V. (ESTC), another search company, have been similarly anxious to unload shares (see below).

I suspect this bearish insider sentiment stems from the companies’ deteriorating financial performance and significant exposure to weakening economic conditions.

Though Yext’s sales had a 34% CAGR over the past three years, operating income, net income, and operating cash flow (NYSE:LTM) are at or near an all-time low, according to data from StockRow (see below). 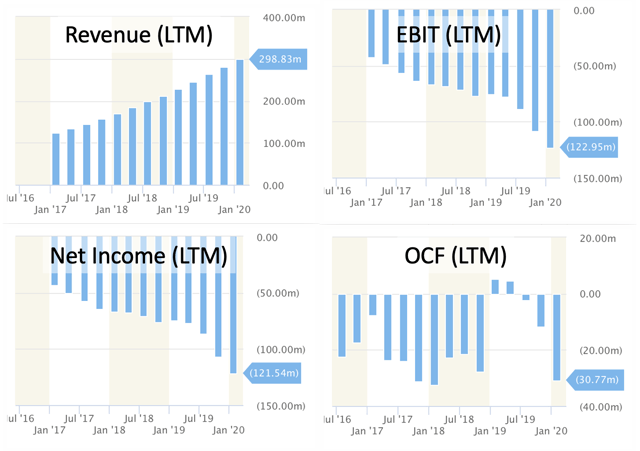 Margins are equally abysmal; EBIT margin is at an all-time low, and EBITDA and net margins have stayed below -25% since the company went public in March 2017 (see below). 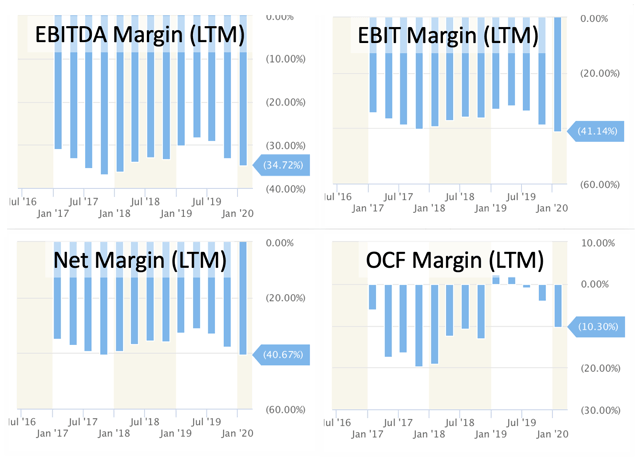 Additionally, Yext’s asset turnover ratio has fallen 60% since Q417 and its ROE has been negative since Q218. From Q217 to the present, equity dilution has been significant, with the number of common shares rising 28% (see below). 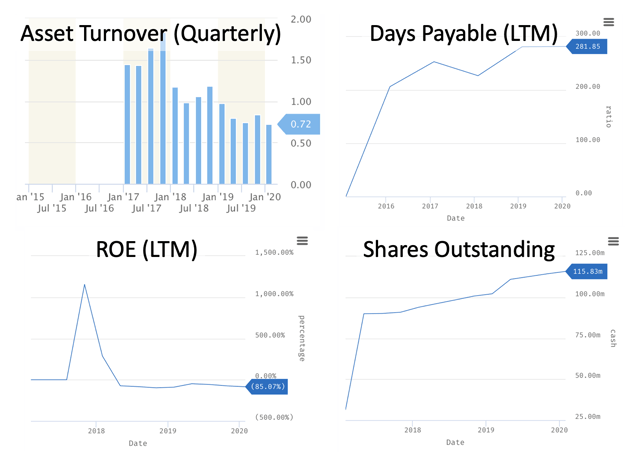 Also, the firm’s financial health is questionable. Its Altman Z-score of 0.75 indicates financial distress, as does its Piotroski Score (LTM) of 2/9.

Despite its feeble financial performance, Yext is still selling at a premium compared to other software companies.

Based on P/B, P/S, and EV/S, Yext’s valuation is on average 50% above its industry median. Meanwhile, its profitability, efficiency, and earnings growth metrics place it in the bottom 18% of its peer group (see below).

Only its revenue growth exceeds the median of its peer group. And as economic conditions continue to deteriorate, Yext’s growth will become increasingly under threat.

Too often, investors overprice companies that offer a “big market promise”: easily scalable revenues that could generate big profits. Yext is a perfect example. In a recent earnings call, management claimed that the company’s new Answers service would more than double the company’s total addressable market. They claimed that as a result of the new offering, Yext would now compete in a $20bil category. They also cited numerous sales growth figures, likely intended to suggest that the company has strong scalability potential.

But scalability is about more than revenue growth; it also requires maintaining or even improving margins while revenues accelerate. As shown earlier, Yext’s operating margins are at or near all-time lows. Despite sharing countless positive facts regarding sales growth, management offered no clear path toward improving margins.

The company’s revenue growth is relationship-driven and needs a significant sales force, as noted in its recent 10-K. That sales machine isn’t cheap. In fact, for each of the past three years, sales and marketing expenses were about 70% or more of total revenues. Clearly, scalability is unlikely without a fundamental change in Yext’s business or sales model.

In a white paper from last December, Aswath Damodaran and Bradford Cornell noted that “big market promise” stocks are often initially overvalued and later see their share prices correct to more realistic levels. So far, Yext’s shares have definitely followed that pattern. The company’s stock surged 67% in the initial 17 months after its IPO and reached a P/S of 13 in late August, 2018. It has been correcting ever since. The initial overvaluation was so severe, shares have still not reached realistic levels.

Equity dilution will likely continue to depress Yext’s share price. The 10-K notes that equity compensation is a big part of Yext’s compensation plan. Management expects to increase the amount of common stock that is reserved for issuance, which would cause dilution. Yext’s certificate of incorporation allows for the issuance of up to 500,000,000 shares of common stock and 50,000,000 shares of preferred stock, and the company is well below both of those upper limits. Also, on March 11, 2020 the company entered into a new credit facility which limits their ability to take on more debt, capping it at $100 million over the next three years. This would force them to issue more equity shares if they needed to raise more funds.

Also, investor sentiment could turn even more negative if Yext revises their 2021 guidance downward to reflect the economic impact of Covid-19. Management says the 2021 guidance they provided in the earnings call ignored coronavirus risks and assumed business as usual. It is highly likely that they will have to revise these projections as we gain more visibility into the economic damage that has resulted from this global pandemic. The recent 10-K clearly warns that economic disruptions from coronavirus could cause customers to reevaluate/cease their demand for Yext’s offerings. This is hardly unlikely given the countless forecasts for an economic contraction in 2020 resulting from Covid-19. Deutsche Bank and Bank of America both expect a GDP contraction in Q220 of around 12%, Goldman Sachs expects a 24% contraction, and both the UCLA Anderson School of Management and Bank of America think that the U.S. recession has already started.

Yext’s customer base is fairly concentrated. The aggregate of its top five customers accounted for 11% of the company’s total revenue in 2019, and management expects this concentration to continue in the future. The loss of one or two key clients could seriously reduce Yext’s revenue growth, and likely its share price. Recently, Yext signed the biggest deal in the company’s history with Accor Hotels, and the coronavirus outbreak could seriously mitigate the benefits of this deal.

Finally, Yext’s business model lacks a long-term competitive advantage, aka moat, as it simply uses a combination of database management and AI (natural language processing) to deliver its services. Thus, competitive pressures could easily drive down Yext’s market share, especially if a bigger player like Google aggressively stepped in. In fact, the 10-K notes this risk, warning that Yext’s platform could be rendered unnecessary if a large internet provider consolidated/controlled the places where customers often look to find business hours, location, and other key information.

Short positions are higher risk than longs and should thus be given a shorter time horizon. Given the pessimistic U.S. economic forecasts for Q220, investors may want to give this trade 3-6 months to play out.

When attractively priced, puts are preferable to short selling since they don’t involve using borrowed money; no need to worry about paying dividends, margin interest, or encountering a margin call. Sadly, puts are often expensive and significantly less efficient at generating profits from stock declines compared to going short. Yext’s puts are too expensive to be useful for this trade.

Based on the trade’s timeframe, we would consider buying any puts expiring in 7/6/20 and beyond. I scanned through these potential contracts, found their profits at expiration for various scenarios, and compared them to going short after normalizing for risk. For a given risk tolerance (arbitrary – I chose 10%), the best put I found would not even yield half of the returns of the short position.

Thus, investors are better off simply shorting the shares and setting a slightly wider stop loss to account for the elevated market volatility we’ve been seeing recently. I suggest $10.60, which is 20% above the current market price. Given the potential share drop of around 50%, this still yields an attractive reward/risk profile of more than 2:1.

If the economic slowdown is more mild than anticipated, it’s possible that Yext could offset reduced demand from some customers by gaining new contracts with customers in more defensive industries; this could include grocery stores or food product manufacturers such as Hostess Brands.

Zacks research indicates that Yext’s earnings for the quarter ending 4/2020 tend to deliver upside surprises compared to the consensus estimate. However, since Yext has only been publicly traded since

March 2017, the earnings surprise patterns may not be as statistically significant as patterns for other stocks given that the lookback period for Yext is relatively small at just 13 quarters. Also, actual earnings often beat consensus estimates on average in general, since management tries to be conservative in guidance to increase the odds that they will deliver a beat.

Disclosure: I/we have no positions in any stocks mentioned, but may initiate a short position in YEXT over the next 72 hours. I wrote this article myself, and it expresses my own opinions. I am not receiving compensation for it (other than from Seeking Alpha). I have no business relationship with any company whose stock is mentioned in this article.

© Reuters. By Gina Lee Investing.com – Asia Pacific stocks were down on Monday morning, with the focus on China Evergrande Group’s (HK:) continuing debt crisis and the from the U.S. Federal Reserve. Hong Kong’s […]