Xpel Inc. (XPEL) has a rare 10-year record of profitable growth. This performance is on par with some of the greatest stocks in the past 50 years, see below.Xpel Results (2010-2019) vs. Great Companies Early In Their Growth

Still, we believe the market is mispricing this gem. Xpel remains largely unknown by the wider investment public. Xpel began trading on the NASDAQ in July 2019. Only 1 analyst is covering the company. Wider awareness of both Xpel stock and its products could send shares up to $35 in the near term.

Our view is that Xpel’s sponsorship of Team Penske for the NTT INDYCAR Series starting in May 2020 and subsequent partnership with Roger Penske’s businesses are the catalyst to send Xpel shares higher.

A little more than 5-years ago we wrote the following in our Top Idea on Xpel:

Few companies come around during an investors’ lifetime that have a probable chance of changing one’s life if enough capital is allocated to it. These companies have a rare combination of extremely high economics, are run by high quality, incentivized owner-operators, have defensible characteristics, high consistent growth with potential to continue high growth, and are trading at a fair price.

Xpel Inc. (XPEL) has been such a company. Just see above how Xpel’s revenue growth stacks up against the early days of Walmart (WMT), Southwest Airlines (LUV), Flight Safety, Fastenal (FAST), and Monster Beverage (MNST).

Xpel over the past ten years has maintained:

The question now becomes: how much higher can Xpel’s stock go?

Xpel sells paint protection film (PPF) to installers and dealers which are then applied to automobiles. Their initial market was exotic and luxury vehicles. As time has gone on, however, Xpel has continuously worked to increase its total addressable market to lower market, pre-owned cars and interiors.

Dealerships have been doing some work increasing awareness of PPF.

A small but growing number of non-luxury auto dealers have been “pre-loading” Xpel on all their car inventories as far back as 2014. That means that the dealer applies a small amount of PPF to the car’s most vulnerable edges and upsells customers on protecting partial or full hoods. The end result is more profits per car sold.

Still most car buying consumers are unaware of PPF. Xpel’s partnership with Team Penske is another step towards building awareness.

In December 2019, Xpel announced that they will be the primary sponsor of Team Penske’s No. 1 car driven by Josef Newgarden. The sponsorship will be for two races – the INDYCAR Grand Prix on May 9th and the Texas Indy 600 on June 6th.

What potential impact will these races have on Xpel’s brand awareness? Let’s look at last year’s viewership of both races to get an idea.

On May 13th 2019, NBC’s broadcast of the INDYCAR Grand Prix was the most-watched event from the Indianapolis Motor Speedway road course since the inaugural race five years prior. The broadcast reached an average total audience delivery (TAD) of 1.072 million viewers. TAD just means the combined views on linear broadcast, cable, mobile, tablets and connected TVs. Included are social and digital media streaming.

Assuming that TAD grows at a similar rate, Xpel could be reaching ~2 million viewers. But Josef Newgarden and Team Penske aren’t just average. Newgarden won the IndyCar Series in 2017 & 2019. Team Penske has won over 500 race victories and is considered one of the best racing organizations. Xpel is partnering with the best of the best in racing.

Where else have we seen brands sponsoring winners? Nike (NKE). Nike started by sponsoring Romanian tennis star Ilie Năstase in 1972. He went on to rank no. 1 in the world from 1973 to 1974. Steve Prefontaine was Nike’s first track endorser. He became a legend in distance running.

Nike’s sponsorship of the best continues today. A Nike-sponsored team has won the College Football Championship every year since 2011. Nike also has won more Olympic gold medals than any other brand. And the list goes on.

PPF installation is somewhat seasonal with the most business done in Q2 & Q3. Although the amount Xpel spent to sponsor the races in unknown, two races reaching 2 million viewers in Q2 could help sell more Xpel PPF. The race will also expand Xpel stock awareness amongst investors. Specifically how much more film the racing sponsorships bring in the short term is hard to quantify, but the long-term implications are obvious.

Motorsports provides a great opportunity to build the XPEL brand and we hope to build on a lot of business-to-business opportunities with their group.” – Roger Penske, Xpel/Team Penske PR

Xpel CEO Ryan Pape and other managers are extremely wise. Not only are they building overall awareness with the Team Penske sponsorship, they are building a long-term relationship with the 2nd largest dealership in the US.

As Penske said above, he can see a fruitful relationship between Xpel and PAG. Why? Dealerships don’t make much money on the actual sale of a car. They make money in financing, parts & services, warranties and other add-ons. PPF has shown to be a very profitable add-on sale for dealerships adding $100s to $1,000s per car sale.

If PAG were to “pre-load” film on its cars, Xpel could see a meaningful boost in revenues. The largest boost would be getting PAG dealers to upsell customers on protecting more of their vehicle with PPF.

In the US alone, PAG could help boost Xpel’s yearly revenue growth rate in North America from ~30% today to 50% or more.

Xpel has been steadily establishing a presence in the UK (2014), Europe (2016) & Germany (2019). The market for PPF is much less mature than North America. PPF is simply less known. The combined markets generated only 9% of Xpel’s total revenue.

The quickest way for Xpel to grow these markets is through a partnership PAG. Adding +184 franchise dealers in the UK & Europe could quickly ramp PPF penetration in those areas. And those territories would become a more meaningful percentage of Xpel’s revenue.

Xpel currently trades at ~40x trailing twelve month earnings. It also trades at 27x EBIT. To properly value Xpel, don’t look at those numbers. Move away from the rear-view mirror and look ahead.

In addition to the Penske partnership, Xpel could increase revenue growth by acquiring installers. The four part punch of increased PPF penetration, new products, stealing share from competitors, Penske partnership and acquiring installers leads us to believe that 30% annual revenue growth is conservative for Xpel for the next two years. China’s growth could expand as well. 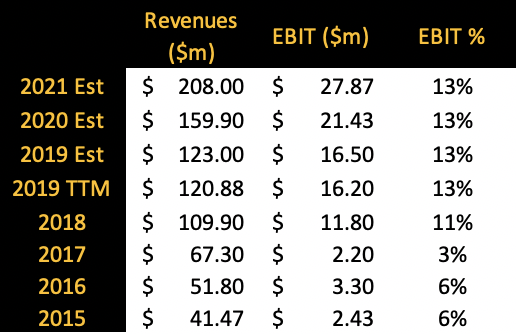 Xpel is a very rare company. Shares outstanding stand at 27.7 million. Insiders own +40% of the business. It is possible the market ascribes a higher value due to scarcity. We think it is possible the company receives a 40-50x EBIT valuation (5-6 times revenue) in 2021.

Why do we think this higher valuation is possible? Take for instance Monster Beverage (MNST). With it’s strong growth in 2004-2005 its shares traded at 8 times revenues and 50x earnings. Sure, the share price dive bombed afterward. However, one could have purchased Monster at 13 times revenue and 210 times earnings and still beaten the market if held a decade later. 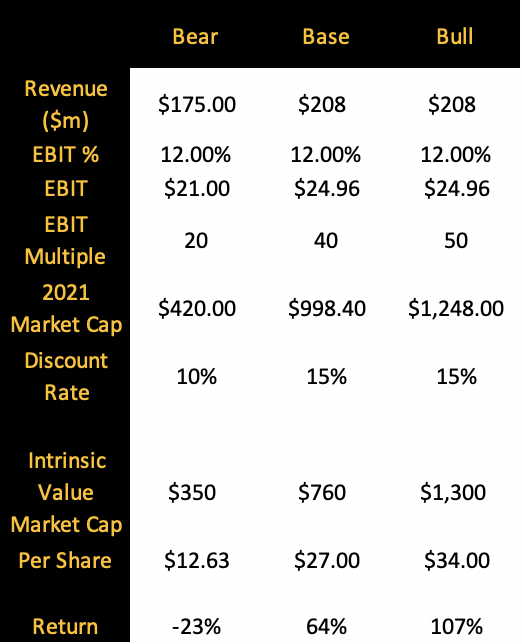 Over the last twelve months Xpel has earned a 13% EBIT margin. Let’s assume that number goes down slightly to 12%. Fast forward to 2021, Xpel would earn ~$25 million before interest and taxes if it achieves a 30% CAGR. At a 40x multiple Xpel could then trade at $1 billion. Let’s discount this back at 15% & Xpel’s market cap should trade at $760 million today. At 27.7 million shares outstanding Xpel should trade at $27. That would imply a 64% increase in share price.

Using our bullish scenario + discounting at 15%, XPEL shares deserve a share price of $34. The share price could increase 107% in the near term.

Continued execution, expanded awareness from the races & an announced partnership with PAG would catalyze this value.

If the economy were to tank, Xpel’s growth would suffer. People buy fewer cars in recessions. Or Xpel might continue to have troubles in Asia similar to earlier in 2019. Both scenarios would impact Xpel’s revenues.

A rollup of Xpel installers, like this one, would also help mitigate any downturn in the economy. These acquisitions could also supercharge our bullish estimate of revenue and profits.

In our bear case, as seen above, we estimate Xpel could still grow 10% year over year. By 2021, Xpel would generate $175 million in revenues. Xpel’s EBIT multiple would contract as well. We assume the EBIT multiple could decline to 20 times. That would leave 2021’s market cap around today at $420 million. Discount that back at 10%, which is still a market beating return, and Xpel’s current share price might decline 23% in the near term.

Xpel can only grow as fast as its installer base. A partnership with PAG could be limited if Xpel doesn’t have the installers to meet the demand. Xpel already has installers near a good portion of PAG dealerships. For instance in Germany, PAG’s Jacobs Automobile Erkelenz is a short drive from Xpel installer Team Ring Police. Xpel could also mitigate this by training PAG dealer’s themselves to install their PPF.

Xpel is a rare business. The likelihood it compounds value at a high rate over the next decade is better than average. Roger Penske, one of the greatest business/racing operators, agrees and wants to partner with Xpel.

Here is your chance to hitch your sidecar to a great business with an attractive risk/reward and a few upcoming catalysts.

Disclosure: I am/we are long XPEL. I wrote this article myself, and it expresses my own opinions. I am not receiving compensation for it (other than from Seeking Alpha). I have no business relationship with any company whose stock is mentioned in this article.

Don Farrall/DigitalVision via Getty Images Introduction When last discussing Shell (NYSE:SHEL), my previous article expected to see monster cash returns coming along with the release of their impending second quarter of 2022 results. Whilst their […]

LukaTDB Bank of Hawaii Corporation (NYSE: BOH) has seen a lot of macroeconomic downturns. Its recovery and rebound, are a testament to its reliance and growth potential. True to its promises, it is regaining its […]