Palladium prices have risen almost thirty percent since the start of the December 2019 uptrend. XPD/USD’s impressive rally appears to have sputtered when the precious metal failed to clear resistance at 2499.50 (red-dotted line) and subsequently retreated to support at 2264.50 (gold-dotted line). Palladium is now approaching the same ceiling again as it tests the December uptrend (broken white line).

Traders will be closely watching for the intersection of the upward-sloping support channel and resistance at 2499.50. If XPD/USD is unable to breach this level with follow-through and breaks below the uptrend, it may inspire liquidation and open the door to a retest of support at 2264.50. Eventually, traders will have to commit to a bullish or bearish bias as the range between support and resistance narrows (purple-shaded area).

After topping at 18.390 in early-January, silver prices have been on a steady decline and were guided by range-binding price parameters (white broken lines). However, XAG/USD is approaching the intersection of the upper layer with support at 17.440 with an ever-shrinking area of indecision (purple-shaded area). Much like with XPD/USD, markets will soon reveal their outlook on silver’s price trajectory. 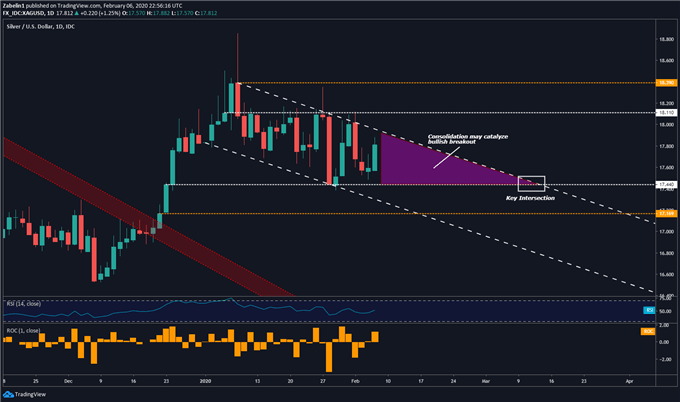 If the compression catalyzes an upside breakout, bullish sentiment may be strong enough to crack resistance at 18.110. However, silver traders will then have to face the 18.390ceiling they shied away from in January. On the other hand, if the bears win, XPD/USD may look to test support at 17.169 with risks of further losses if selling pressure overwhelms buyers.

City of Lodz, Poland. View of the White Factory. whitelook Introduction The Polish equity market has risen over 50% since the last calendar year quarter of 2022 till today. In comparison, the S&P 500 Index […]

J. Michael Jones Back in late November we wrote an article discussing taking profits in Haverty Furniture Companies (NYSE:HVT) that investors should wait until after the ex-dividend date before doing so as it would entitle […]