“The banking system has been a source of strength during this crisis,” Vice Chair Randal K. Quarles said, “and the results of our sensitivity analyses show that our banks can remain strong in the face of even the harshest shocks.” See Federal Reserve Board’s press release June 25.

Governor Lael Brainard did not agree with the Fed Board’s decision. In a separate Fed press release, she said, “This is a time for large banks to preserve capital, so they can be a source of strength in a robust recovery. I do not support giving the green light for large banks to deplete capital, which raises the risk they will need to tighten credit or rebuild capital during the recovery.”

Chart 1 provides a snapshot of just how better capitalized banks are in 2020 than 2008-09. (The Fed reports a slightly lower tier-1 ratio because it tracks holding companies, not banks as reported by the FDIC.)

Stress Test: Stressful but Not as Stressful as the Covid-19 Economy

Chart 2 compares the 3-year earnings forecast (2020-2022) under the Severely Adverse Stress Test for 20 large banks to those same bank’s earnings from 2007-2010. Note that 2020 Stress Test assumptions are forecasted to impact bank earnings much more severely than what the industry experienced in 2008-09.

A second problem with the 2020 Stress Test is that it only anticipated a “V-shaped” recovery. Perhaps the economy will recover in a V-shape, but economists and investors are uncertain.

The Fed has responded to these deficiencies in the 2020 Stress Test in two ways. First, it is requiring banks to do a second round of 2020 Stress Testing based on updated assumptions. Second, it has done its own “sensitivity analysis” that assumes economic conditions more consistent with the economy since March as well as different views for how the recovery takes place (V or U or W).

Chart 3 shows key results from the Fed’s current sensitivity analysis which was also released June 25. (The Fed did not describe, or I did not find in their report, how the “aggregate” capital ratio is determined, but I assume it is the result of a Monte Carlo analysis.)

Bank investors should note the blue bars on Chart 3. The 25th percentile forecast with a U or W-shaped recovery leaves banks with less than half of current capital. A decline in CET1 suggests losses on the order of $500 billion+. This is roughly equivalent to the industry’s total after tax earnings in 2018, 2019, and Q1 2020 combined. 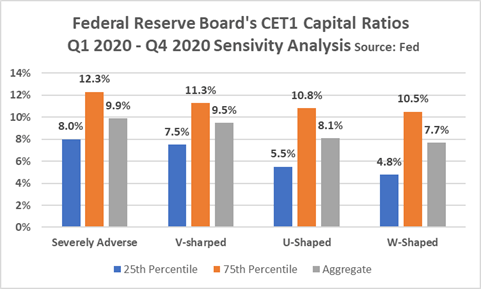 Here is where this analysis gets uglier. Chart 4 shows the estimated pre-tax earnings for 21 US-headquartered banks under the assumptions of the Fed’s current Stress Test. (A total of 34 banks were subject to the 2020 Stress Test, but Chart 4 excludes those headquartered outside the US.)

Chart 4 shows that most banks register negative aggregate pre-tax “earnings” for 2020-2022. For historical reference, among banks on Chart 4 that were actively traded in 2008-09, only Northern Trust Corporation (NTRS) and M&T Bank Corporation (MTB) avoided dividend cuts during that time.

To avert losses of this magnitude, the economy in 2020-2021 will need to grow at a rate faster than the -7% GDP growth rate for 2020 and -1.25% GDP growth rate for 2021 built into the Fed’s model. Unfortunately, the probability of stronger economy looks doubtful. A second surge in Covid-19 infections raises doubt whether the economy is bouncing back as fast as hoped. Absent a mass market vaccine being available in 2020, the weak economy will force banks to preserve capital unless the Fed waives current criteria used to determine dividend policy. 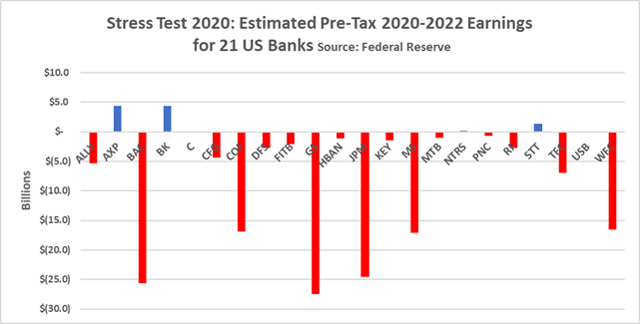 Earnings Matter Too, Not Just Capital

The June 25 statement from the Fed included this statement which has not appeared in prior Stress Test releases to the best of my memory: “The Board is also capping dividend payments to the amount paid in the second quarter and is further limiting them to an amount based on recent earnings.”

The earnings requirement makes eminent sense in my view. However, as worded, it raises a question: How does the Fed define “recent earnings”?

The most generous definition would be aggregate earnings for the past four quarters. If the Fed adopts this definition, every bank appears to be safe in paying dividends in Q3 2020 assuming Q2 2020 earnings at least match Q2 2019 (which is highly dubious).

Chart 5 shows the ratio of dividends paid out over the trailing twelve months as a percentage of net income after tax for the same trailing twelve months. Banks highlighted in red have payout ratios by this measure greater than 50%. Well Fargo and Company (WFC) is the highest at nearly 70%. Its stock price fell 7.4% on June 26 reflecting the market’s recognition of a likely near-term dividend cut. 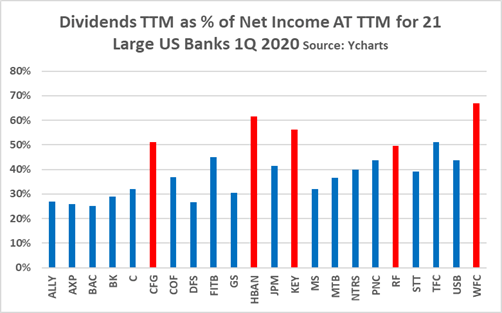 Chart 6 shows the high level details for each bank. 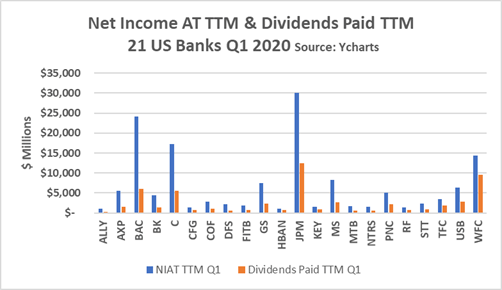 Chart 7 is like Chart 6 but in this case only Q1 earnings after tax and Q1 dividends are depicted. WFC stands out among the biggest banks as having the biggest Q1 earnings to dividend challenge. Perhaps surprising, J.P. Morgan Chase & Co. (JPM) paid out more in Q1 dividends than earnings, a topic addressed in my April 27 Seeking Alpha article about bank dividends. 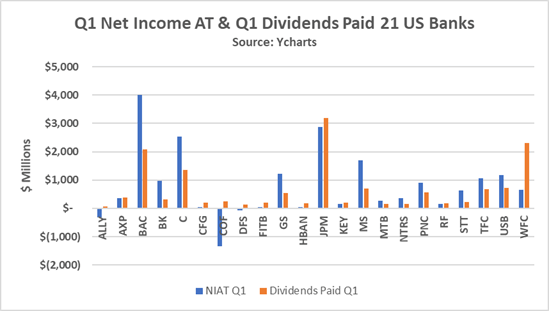 Chart 8 converts the data in Chart 7 into a modified Payout Ratio table. Banks noted with red bars would be all at risk of having to reduce dividends assuming the Fed defined “recent earnings” as Q1 only. Banks noted with red bars are all at immediate risk of having to cut dividends if the Fed defines “recent earnings” as Q1 only. 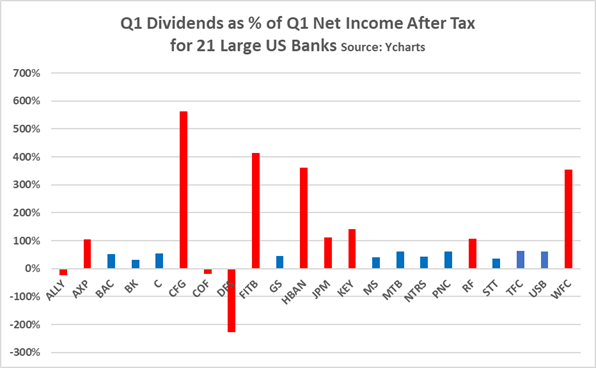 If the Fed defines “recent earnings” as principally those reported in Q1 and Q2 2020, bank dividends are at immediate risk for many banks. On this basis it appears certain that WFC will have to cut its dividend immediately, but they will not be alone.

Others at immediate risk are: Citizens Financial Group Inc. (CFG), Huntington Bancshares Incorporated (HBAN), KeyCorp (KEY), and Regions Financial Corporation (RF). Stock prices for these banks fell on June 26 by -8.3%, -11.0%, -8.9%, and -8.6%, respectively. These declines were greater than other banks reflecting the market’s recognition of likely dividend cuts.

Chart 9 is more bad news for bank investors. The blue bars show the 2020-2022 net income before taxes estimated by each bank under the original assumptions of the 2020 Fed Stress Test. The orange bars reflect each bank’s Q1 dividends paid ($s) multiplied by 12 (12 quarters).

The result is that that only The Bank of New York Mellon Corporation (BK) forecasts greater earnings before taxes for 2020-2022 compared to potential dividends paid. This is a problem that will be magnified when the Fed introduces more severe economic assumptions than the “severely adverse” assumptions built into the original 2020 Stress Test.

The safest banks from a dividend perspective, in addition to BK, are NTRS, American Express Company (AXP), and State Street Corporation (STT). These banks’ stock prices performed moderately better than other financial institutions on June 26, falling -4.80%, -2.86%, -4.53%, and -5.66% respectively. 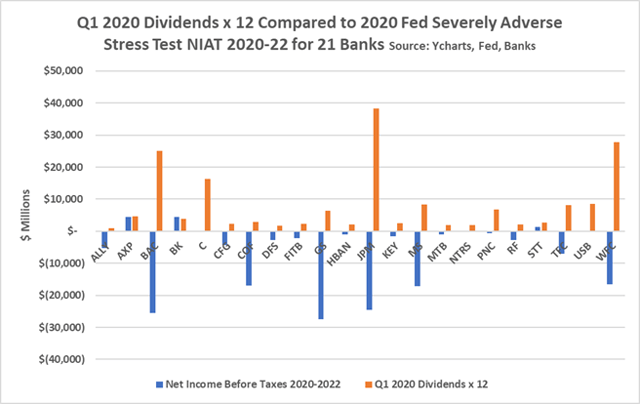 As of June 28, banks with the highest yields represent the banks with the greatest probability of having to cut back dividends going into the third quarter. Chart 10 shows that in addition to the bank’s already mentioned, Truist Financial Corporation (TFC) and Fifth Third Bancorp (FITB) also appear among the most vulnerable banks to dividend cuts. 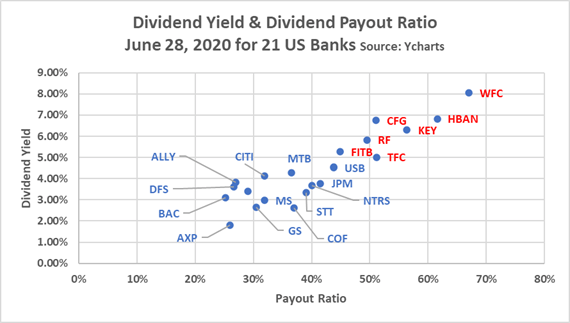 Is There Any Good News?

My personal view is that federal regulators and bankers are doing an excellent job navigating this treacherous economy. Assuming politicians can avoid politicizing banks, then it is possible that cool-headed regulators and bankers can see the banking industry through these difficult days before a mass market Covid-19 vaccine is in place. Obviously, a vaccine is a game changer for the economy, and therefore, for the banks. Sooner the better.

Evidence of the sober mindedness of regulators and bankers can be seen in Q1 lending activity. Chart 11 shows loan outstanding for US banks by quarter from 2000 to Q1 2020.

Note that loans in Q1 2020 increased 2.84% over Q4 2019, the biggest one quarter increase since the FDIC began tracking this data in 1984. In contrast, despite a much stronger economy (as measured by GDP and unemployment) in 2008-2009, regulators (influenced by panicked politicians?) slammed the break on bank lending, leading to an unprecedented drop in loans of 10% over just six quarters.

Vice Chair Quarles’s press release of June 25 included this important comment: “We have encouraged banks to use that capital and liquidity to promote safe lending. The banks have responded by sharply increasing their lending, absorbing a crush of deposits, and working constructively with borrowers in these challenging times.”

If bank regulators keep a steady hand and are unimpeded by political forces, then banks can and should play a vital role in getting the economy back on track when the Covid-19 vaccine is in place.

Two Final Thoughts: It is a Race and Beware Politicians

The US is blessed today to have the finest bankers in the nation’s history leading its largest banks. These banks can survive the Covid-19 economy even if a mass market vaccine is not in place until mid-2021 as currently forecasted.

A race is on between the advent of a mass market vaccine and the need for banks to cut dividends to preserve capital. For Wells Fargo and possibly some other banks, it appears the race is already over as “current earnings” are insufficient to cover current dividends.

For other banks, absent a mass market vaccine by year-end, or first quarter at the very latest, it seems virtually certain that they will have to cut dividends too.

Banks will get through this crisis provided bankers, regulators, and especially politicians stay the current course.

If politicians choose to politicize banks this election cycle as they did in 2008-2009, I am a seller of even high-quality banks.

Disclosure: I am/we are long PNC, JPM, HBAN. I wrote this article myself, and it expresses my own opinions. I am not receiving compensation for it (other than from Seeking Alpha). I have no business relationship with any company whose stock is mentioned in this article.

Additional disclosure: As a retired Bank of America employee, I continue to have certain financial interests in BAC. On June 26 I sold shares of HBAN held in a speculative account and acquired in March 2020.