COVID-19’s steep selloff around late March opened the door towards numerous opportunities across the market for investors to take advantage of. Since then, the overall indices have rallied massively, powered by the tech sector. However, not all stocks have recovered, and some even still trade at quite attractive price levels.

One such company whose shares were severely beaten down is Federal Realty Investment Trust (FRT). Unlike most stocks in the market, FRT didn’t rally back, currently trading marginally higher than its April’s lows.

The reason that this REIT is quite unique is that FRT is the only REIT in the Dividend Kings group of stocks, boasting 50+ years of consecutive dividend increases. Investors rarely get the chance to buy high-quality companies like FRT at a discount, as they are usually trading at a premium. At a decade-low stock price, it currently yields a decade-high dividend yield of nearly 6%, presenting a juicy, high-quality opportunity for income-oriented investors to grab. 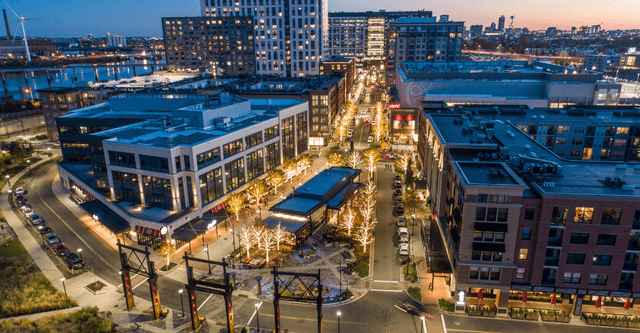 In this article, we will:

Because of Federal Realty’s significant exposure to shopping centers, its financials took a significant hit during the early months of the pandemic. In April, for example, the company collected only 65% of its rental payments, while even a month later, in May, only 47% of its tenants were open and operating.

As a result, this will be the first financial year in which the company will not report consecutive revenue growth in over 30 years. Yes, that’s right, FRT did manage to grow its revenues even during the Great Financial Crisis. 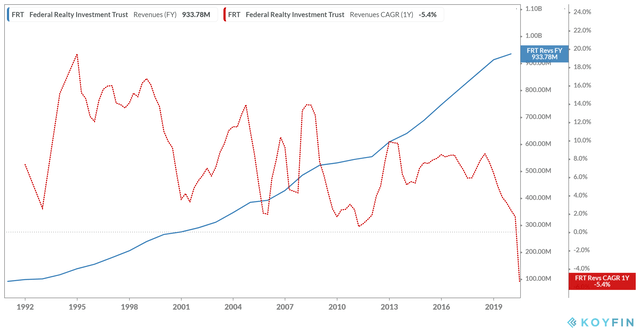 Seeing the unusual deterioration of its short-term financials, the market has gotten fearful of FRT’s investment case. However, the latest metrics from rental collections over the past couple of months show significant improvement, with more than 3/4th of the total rents collected by the end of July. At the same time, missing rental collections does not necessarily mean entirely losing them. During Q2, the company deferred $21 million, or 10%, of the quarter’s billed recurring rents with a weighted average repayment period of 9 months. Management expects 92% of those to be repaid by December 31, 2021.

Despite the challenges in the company’s financials, its distributions remain safe. Investors are currently given the opportunity to buy FRT at an attractive valuation, which was previously rarely the case.

The company’s dividend growth record spans across 53 years of dividend increases, with a CAGR of 7.5%, being sustained through various recessions and adverse economic environments.

Over the past few years, dividend growth has slowed down in order for management to maintain a prudent payout ratio. Indeed, over the past decade, FRT’s payout ratio has largely remained below 70%.

As you can see in the graph, while FRT’s FFO/share is expected to end FY2020 significantly beaten, management’s prudent planning has paid off, since distributions have still managed to remain covered. 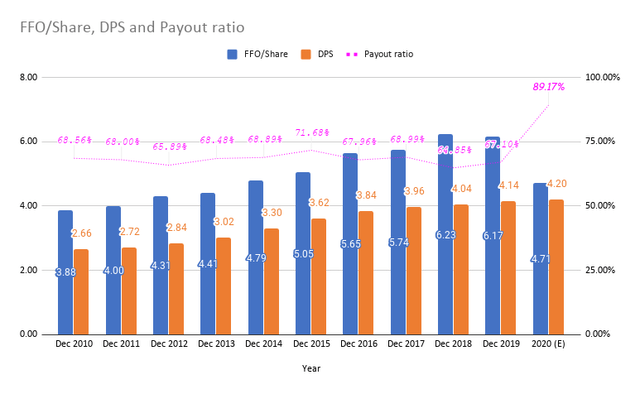 By not distributing close to its FFOs, FRT has managed to keep the current DPS safe, despite the challenges. Further, management increased the quarterly dividend by a cent, to $1.06. While the DPS increase is mostly symbolical, it’s also a reminder of the company’s commitment to keeping growing its distributions annually, with no exception.

Overall, investors are now able to buy a well-covered dividend, yielding a fat 6% by a Dividend King. At the same time, they can do so at an attractive valuation. Finally, with $2.0 billion of liquidity in cash, including its undrawn availability under its $1.0 billion revolving credit facility, the company could even potentially facilitate the dividend even if it wasn’t temporarily covered from its FFOs.

Because of the FRT’s pristine track record of annual dividend increases, its stock has always been trading at a premium. Shares would usually hover above 20 times the company’s FFOs, being relatively pricy. Post-March’s selloff, however, shares have been trading at a much more attractive multiple, around 13X FFOs. After a long time, the valuation has come near to the industry’s average, becoming much more appealing. 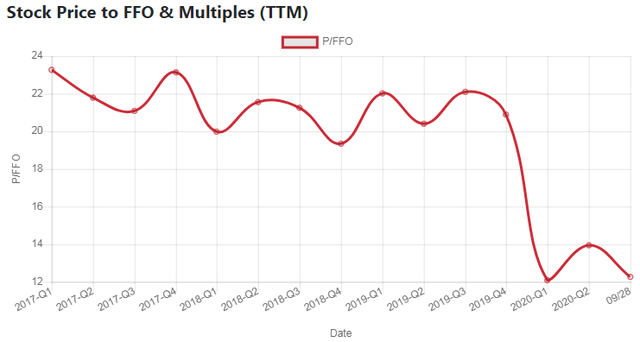 The stock’s valuation compression has opened up the opportunity for current investors to enjoy a near-decade high yield of 6%. The chart below provides great context as to what happened the last time shares were yielding that much. That is, the market eventually realized the company’s quality cash flows and ran back to FRT and its generous yield. 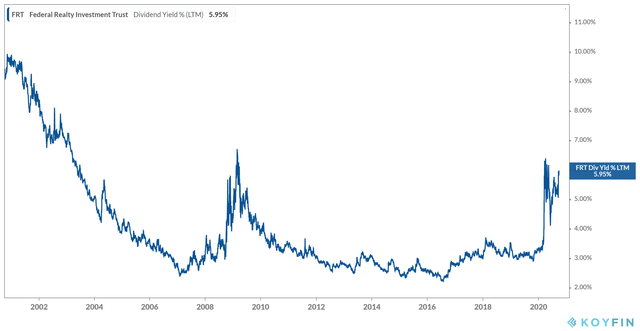 Under its current low valuation and juicy dividend, we believe that shares offer not only attractive but also tangible returns, especially charming for income-oriented investors.

To assess future investor returns, we need to make some reasonable FFO projections. Consensus estimates point towards a quick jump in 2021 amid resumption of its usual rental collections, before FFOs return to their usual mid-single digit growth rate.

FRT’s latest metrics pointed towards a decent resumption in rental collections, with multiple arranged deferrals signed. With that in mind, we are confident of a quick FY2021 recovery as well. The REIT has several buildings in its development line as well, which should power revenue growth in the medium term. However, we are going to be more prudent than analysts by projecting a more humble growth rate during this period.

Beyond 2021, we are projecting FFO CAGR of 4% and DPS CAGR of 1.5% to maintain a safe payout ratio. Based on these growth rates, future figures are likely to look like the following: 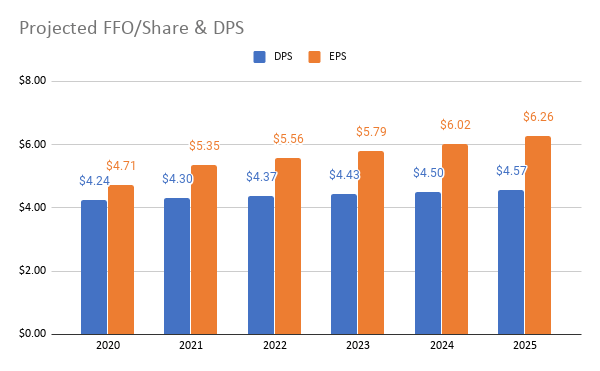 Now, we need to estimate a reasonable future valuation range. This is where FRT’s currently attractive valuation shines, in terms of generating great future returns.

Due to DRIPping FRT’s dividend at its current, low valuation, investors have the potential for massive returns amid a valuation expansion. Assuming a slight climb in its earlier P/FFO price levels, even at say 10-14, investors could be looking at double-digit annualized returns in the mid-to-high teens.

Further, shares provide a great margin of safety. Even if the company’s valuation remains this low, FRT’s dividend payments and slowly but gradually advancing FFOs are still able to generate adequate returns, close to a double-digit rate.

Federal Realty Investment Trust has displayed several decades of continuous excellence in delivering shareholder value, while gradually growing investors’ income. The recent correction in its stock provides current investors with a unique opportunity to initiate a position near a decade-high yield of around 6%, which is also well-covered by the underlying FFOs.

However, there are some risks to take into account as well. FRT’s rental collection recovery is gradual but not that impressive. Unlike other REIT sub-sectors, like data centers, which experienced few challenges, we believe that it may take a while before collection rates return to more satisfactory levels. This could potentially keep the stock’s valuation at its current, low-double digit ratios.

Further, it’s worth noting that FRT’s debt/equity has significantly increased lately. It’s quite normal for REITs to have an “indefinitely” growing debt. Since they distribute the majority of their cash flows, they need to raise debt and equity for their future growth constantly. As a result, a balanced ratio between debt and equity is mostly a preferable way of future financing. In the current ultra-low rate environment, it makes sense that FRT would prefer to raise more debt, since it is cheaper. 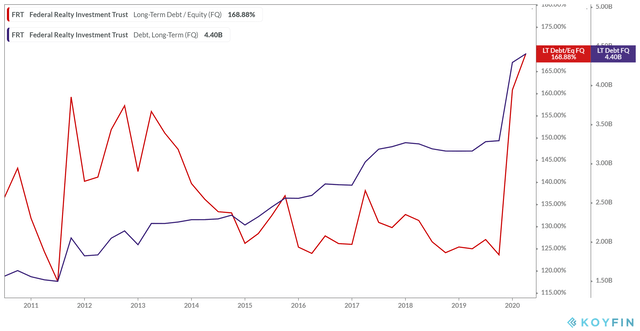 Indeed, in its May’s offering of $400 million due 2030 and $300 million notes due 2024, the company managed to borrow with effective yields of 3.630% and 2.944%, respectively. One the one hand, this displays FRT’s balance sheet qualities, that it is able to borrow at dirt-cheap rates in the midst of the pandemic.

On the other hand, if the company’s underlying operations don’t improve in due time, lenders may require higher rates upon refinancing these notes, hurting its FFOs in the future. Overall, the main risk we see on FRT is the speed at which it can improve its rental collection and occupancy rates. Therefore, the next couple of quarters will provide crucial data.

In any case, even though we projected a relatively prudent FFO/Share growth going forward, we believe that FRT offers an adequate return potential, even if its recovery takes a while to materialize. Considering that its yield is well-covered, and a further compression in its valuation is quite unlikely, shares offer a satisfactory margin of safety as well.

It’s not often you get the chance to buy a Dividend King yielding a well-covered 6%, and we are definitely not missing this one.

Wheel of FORTUNE is a one-stop-shop, covering all asset-classes (common stocks, preferred shares, bonds, options, commodities, ETFs, and CEFs), across all sectors/industries, through single trading-ideas and model-managed portfolios.

The extremely-wide scope of the service allows us to cater all types (of investors) and (investment) needs/goals, making WoF a true one-service-fits-all.

Our offering includes, but isn’t excluded to, the following:

Disclosure: I am/we are long FRT. I wrote this article myself, and it expresses my own opinions. I am not receiving compensation for it (other than from Seeking Alpha). I have no business relationship with any company whose stock is mentioned in this article.