The WisdomTree U.S. LargeCap Dividend ETF (DLN) tracks an index of 300 US large-cap companies that pay dividends. The index is dividend weighted according to the aggregate cash dividends paid by the company. The ETF charges a fee of 0.28%, which is comparable to competing ETFs.

DLN holds only companies based in the US and contains 279 holdings as of the time of writing, a few less than the 300 holding index the ETF tracks. The top sector held by the fund is technology at over 20% of the fund. A significant portion of this is Apple (AAPL) and Microsoft (MSFT). Financials is currently the second largest sector, weighing in at 16.4%, while healthcare comes in third at 14.2%. Consumer non-cyclicals is a close fourth at 13.4%. From there, the sector weighting begins to drop off a bit with industrials coming in at under 9%. Consumer cyclicals makes up less than 7% of the fund. Utilities and telecommunications make up a little more than 5% of the fund each, while Energy accounts for just under 5% of the fund. Finally, basic materials comes in tenth with a 1.85% weighting. 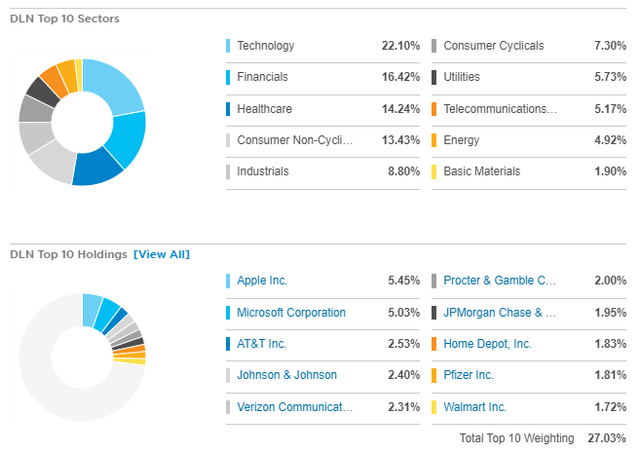 As for individual holdings, it’s not much of a surprise that Apple and Microsoft top the list at weightings of around 5% each. I would consider both of these to be dividend growth stocks that still have significant potential not only in yield and payout ratio but also in capital appreciation as well. The third-largest holding is AT&T (T) at a weighting of 2.53%, which currently boasts a forward dividend yield of nearly 8%. Johnson & Johnson (JNJ) comes in fourth at 2.40%. Verizon (NYSE:VZ), another high yielding company (over 4%) is weighted at 2.31%, putting it in 5th place. Procter & Gamble (NYSE:PG) is weighted at 1.95%. The first financial company is JPMorgan (JPM) at a weighting of 1.95%. The Home Depot (HD), Pfizer (PFE), and Exxon Mobil (XOM) each come in at a little over 1.5%, rounding out the top ten holdings in the fund. Altogether, the top 10 holdings make up a solid 27% of the entire fund. This isn’t unusual in many ETFs, although is considerable concentration in a fund of nearly 300 holdings.

Performance: Not The Best, Not The Worst

There are dozens of potential dividend ETFs out there to choose from so it’s difficult, if not impossible to compare DLN to all of them. Below I’ve chosen two of closely competing ETFs to compare DLN to. The iShares Select Dividend ETF (DVY) as well as the Schwab U.S. Dividend Equity ETF (SCHD).

Over the last 5 or so years, DLN has returned about 42% while paying a dividend yield usually between 2.5 and 3%. Certainly not bad, however, the SCHD has returned a more impressive 54% while maintaining a higher dividend yield for almost the entire time over the last 5 years. DVY on the other hand, has lagged behind both ETFs, returning just 14.7%, although paying a considerably higher yield as well.

SCHD charges an expense ratio of just 0.06% compared to DLN’s 0.28%. This is likely a contributor to at-least some of the outperformance from SCHD. Then again, SCHD is more concentrated overall with only around 100 holdings, so it makes sense that if SCHD picks the right companies, the fund will outperform. Given that SCHD rebalanced not too long ago, the holdings are now quite different than DLN, so investors may want to assess which one better reflects their own investment tolerances.

Using a tool like portfolio visualizer will allow us to examine what one’s returns would look like in various ETFs over time with all dividends re-invested. Below I’ve selected the same three ETFs. Interestingly enough, the S&P 500 ETF (SPY) beat all three dividend ETFs highlighted here.

DVY ended as the worst performer, (interesting considering it has the highest yield), while the DLN came in second. The Schwab ETF SCHD proved its low expense ratio and solid holdings mix has resulted in superior returns for shareholders compared to DLN. Finally, the now tech-heavy S&P 500 outperformed all three dividend ETFs by a considerable margin.

While past performance isn’t a lot to go on going forward, I think there are a couple of clear takeaways here. The first is that a high yielding ETF isn’t necessarily going to lead to outperformance if capital appreciation remains the most important aspect of overall performance. The second is that low fees in ETFs can make a substantial difference over time.

DLN is nothing special. The ETF is relatively basic for a dividend ETF, and charges an expense ratio that, while not egregious, certainly isn’t the lowest out there. ETFs like SCHD have consistently outperformed DLN while maintaining a lower expense ratio and a higher yield. I would think twice about investing in DLN over other less expensive alternatives.

I’ll be writing more articles on great (or sometimes not so great) stocks and ETFs. If you enjoyed this article and wish to receive updates on my latest research, click “Follow” next to my name at the top of this article. Also, consider checking out the links to my social media pages on my Seeking Alpha profile.

Nasdaq 100 Price Outlook: Nasdaq 100 Forecast: What Can Traders Expect in December? The Nasdaq 100 closed November more than 11% higher for the month after surging in the aftermath of the US Presidential election […]

Thus far, I’ve focused on coastal apartment REITs. My preference for these REITs has been based on: Limited supply, particularly in LA/SF and Boston which have very strict zoning making it almost impossible for meaningful […]