When Will the Stock Market Crash?

Equities in the developed world, particularly in the United States, rounded out the decade with a strong showing as key risks subsided and an accommodative monetary policy backdrop allowed stocks to soar. With 2020 in focus, there is evidence for a continuation higher.

What is a Recession? Signs, Causes & Impact Investors

Still, some investors harbor concerns over the stock market’s health and stability in the year ahead, but can the headwinds work to outweigh the benefit of looser monetary policy and easing risk trends? Here are some of the themes that could spark a stock market crash in 2020.

Much of 2019 was plagued with fears of slowing global growth, a theme exacerbated by trade wars – mainly between the US and China – that worked to drive uncertainty and delay some businesses from making capital outlays. In turn, slipping global trade and prolonged policy uncertainty exerted further pressure on the already slowing economies of the world. As growth forecasts tapered off, the case for higher equity valuations was undermined as future profit outlooks fell beneath previous expectations. 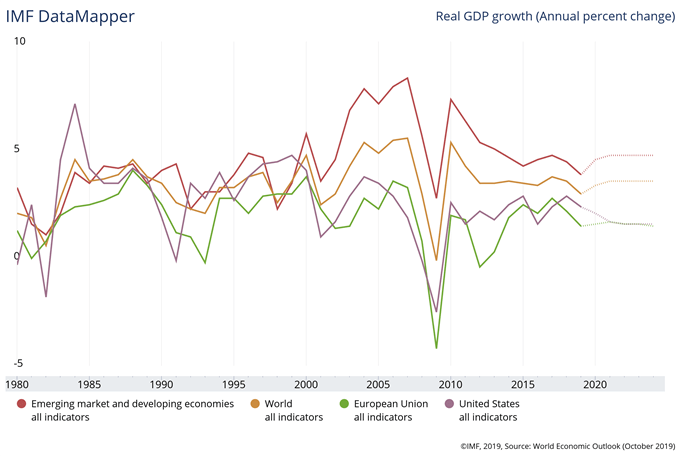 That being said, an initial “Phase One” trade deal between the United States and China reached at the end of 2019 worked to assuage such fears and sparked the year-end rally into the new decade. Similarly, US economic data has hinted that the slowdown in the manufacturing and service sectors has leveled off. 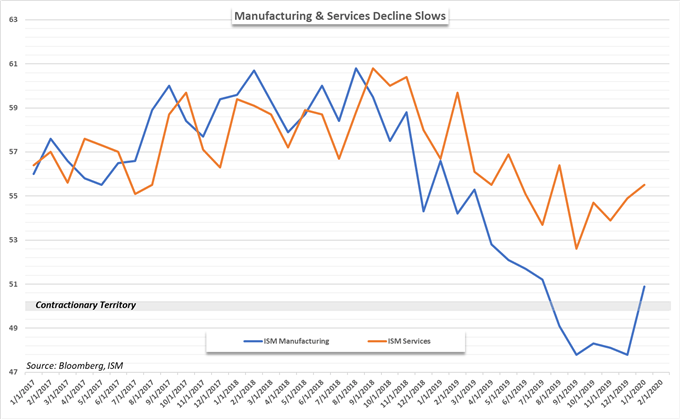 Further still, data from FactSet suggests the S&P 500 will see bottom-up EPS growth despite the headwinds. It would be within reason then, to suggest trade wars and slowing global growth will take a back seat as catalysts of risk aversion in 2020. However, the fluidity and unpredictability of trade negotiations will likely keep them in the headlines and deserving of a spot on the risk radar nonetheless. 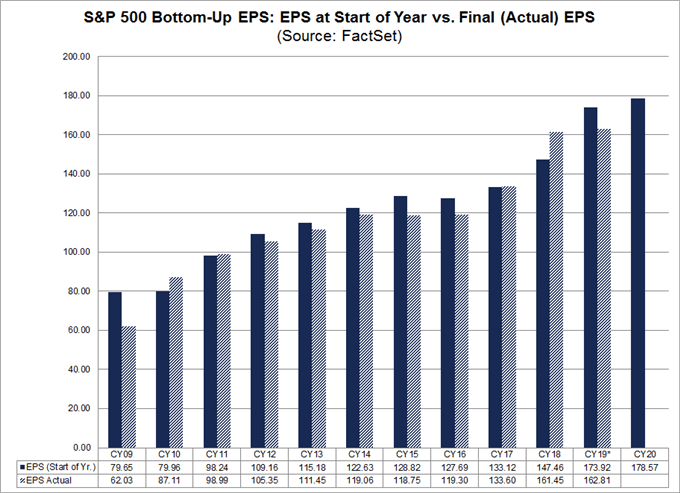 Although trade headlines and tariffs may not cause the stock market to crash outright, an expanded trade war – perhaps one between the United States and the European Union – could work to compound other uncertainties that the Dow Jones and S&P 500 will have to negotiate, like the presidential election cycle.

Political Uncertainty & The US Election Cycle

Another hot-button issue that will dominate headlines and likely maintain a spot at the forefront of investor concern is the upcoming Presidential election in the United States. As candidates vie for the support of the American people, their polling results and corresponding policy promises will surely spark stock market turmoil, especially if an anti-business candidate appears likely to enter the White House.

As it stands, President Trump is a relatively pro-business President. Slashing corporate taxes and exploring further reductions for the middle class, the President has given the equity market reasons to rejoice – apart from his pressure for lower interest rates and quantitative easing – but has also created a lot of turmoil through his trade policy. Still, the Trump administration has said its broader goal has been to expand the US economy and promote growth, in part by balancing trade relationships with other nations.

Therefore, if a candidate that promises to raise taxes while aiming to reform sectors like healthcare and technology surges in the polls, an adverse reaction in the broader market could be expected. Furthermore, particularly acute damage could be dealt to the targeted industries. To be sure, the efficacy or greater good for the American populace produced by one policy framework versus another is up for debate, but any indication a business-friendly candidate – President Trump or otherwise – will lose out to a candidate whose plan’s will constrict growth will surely weigh on stock valuations. Thus, the US election cycle will its spot as a top risk to watch as the year progresses.

Finally, and perhaps most importantly, is the threat of inflation. As the world’s major central banks continue to inject money into their respective economies in pursuit of economic growth, inflation has remained dormant. Fed Chairman Jerome Powell has effectively taken rate hikes off the table until the United States sees a material and consistent rise in inflation. Consequently, there is a very real possibility of further rate cuts if growth continues to disappoint, and that potential has likely been factored into some analyst’s equity price targets in 2020. 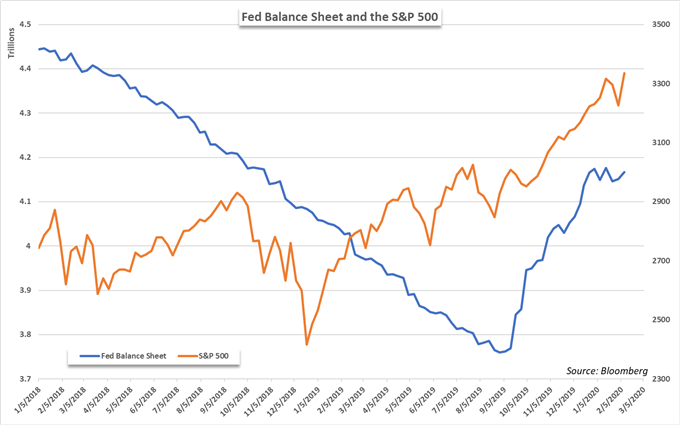 Therefore, a sustained uptick in inflation could pull the rug out from under the major equity markets in 2020 as central banks shift their focus from promoting economic expansion, to quelling inflation by raising interest rates. As it stands, many Wall Street analysts and talking heads have argued inflation is muted because it is simply being calculated incorrectly as many of the ingredients for rising inflation are present in the economy.

How to Invest During a Recession: Investments & Strategy

Low unemployment, wage growth, loose monetary policy and a substantial government deficit are typically contributing factors to rising inflation, yet the Fed’s preferred measure of inflation – Core PCE – remains comfortably beneath the 2% target. Therefore, should inflation rise, the Fed would likely be forced to consider higher interest rates which would undermine a main driver of the equity gains established in 2019. Such a reversal in monetary policy could spark an abrupt shock to equity demand and valuations. 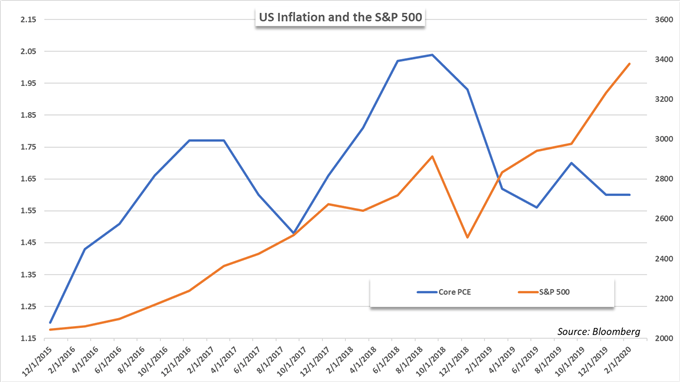 That being said, there are few signs inflation is on the rise and that is precisely why it may pose such a threat. Since it is arguably an underappreciated risk, an unexpected uptick could deliver the necessary spark to ignite a crash, unlike the other themes that will likely offer persistent pressure but may be less likely to result in an abrupt reevaluation of growth forecasts and asset prices that would devolve into a crash.

Gold could benefit in an inflationary environment

At the onset of 2020 and the advent of the new decade, however, it seems unlikely such a crash will take place anytime soon. As I discussed above, a crash would likely require a collection of persistent pressures working to overcome the effects of accommodative monetary policy, an unexpected rise in inflation or something completely unknown at present.

Still, years of low interest rates have distorted the traditional risk-reward profile and could see an eventual crash create a greater unraveling in risk assets. That being said, it is nearly impossible to forecast such an event, so investors should be mindful of their risk exposure and employ proper risk management techniques regardless of the shorter-term equity outlook.