The restaurant industry was very obviously hard hit by the current crisis. Restaurants were largely shut down entirely, or operating at reduced capacity for much of this year. Fast food restaurants, however, fared much better as they were able to quickly pivot to drive-thru service that was nearly contactless, and therefore COVID-friendly.

One such example is Jack in the Box (JACK), the chart of which you can see above. Shares plummeted from $88 to just $16 in the space of a few weeks, only to rebound very sharply, and then sustain that rally through today, where shares change hands at $83. The recovery looks mighty impressive, but it is important to note that the restaurants in general haven’t been particularly strong against the broader market, and JACK hasn’t been particularly strong against the industry.

Relative strength is a problem

Below is a chart of the Restaurants & Bars index against the S&P 500 for the past year, and as you can see, the picture isn’t looking great for the restaurants.

The restaurants have underperformed the broader market for months, and that includes the recent rally from the bottom. The sector has failed even to reach prior levels of strength against the S&P 500, let alone make new highs. Against this backdrop, it becomes even more important that individual stocks are outpacing what can easily be considered to be a weak sector at this point.

However, as we can see below, that isn’t the case, either.

JACK has jumped back to essentially the same spot it was in prior to the crisis in terms of its performance against its sector, but no new highs have been made.

Now, for some good news

While it is true that I see JACK as having some relative strength issues to work through, there are also some very strong fundamental trends underway that should not be ignored. One thing JACK has done in recent years has been to substantially reduce its number of company-owned stores’ revenue, which now stands at less than 10% of system-wide sales. This strategy is all the rage in fast food, and has been for some time, as it has become somewhat unusual for fast food chains to actually own their stores, eschewing that for a franchising model that has much better margins but lower revenue.

The end result of the effort for JACK can be seen below, with strong results shown. 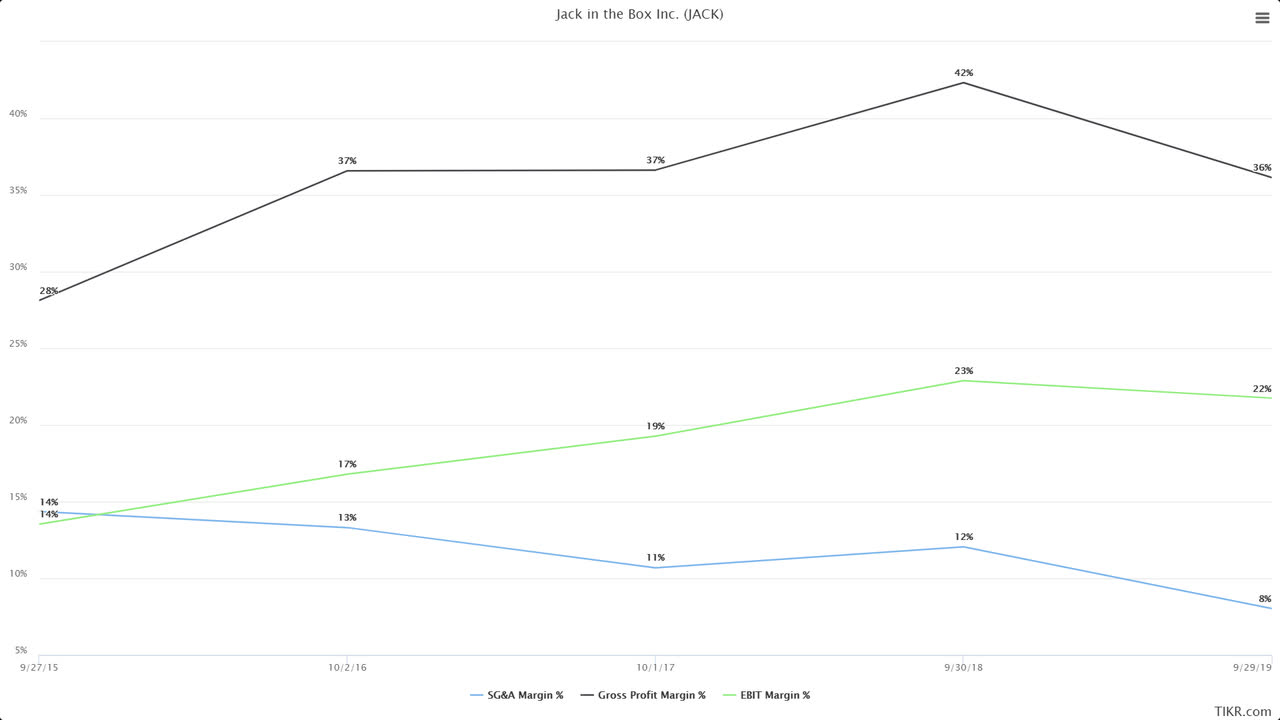 Gross margins have risen over time, SG&A costs have fallen drastically as running a franchise model takes far less labor than owning the stores, and the end result is that operating margins have soared. This is the desired outcome of a franchise-heavy model, and JACK has certainly delivered.

Indeed, EBIT margin was 22% last year and 23% the year before, after having spent years in the low-teens. These are material, significant improvements in profitability, and it has shown in the company’s earnings results in recent years.

But that’s not the only benefit of a franchise model; the extremely low capex required by this model means that cash production is high, which affords the company flexibility when it comes to how to use that cash. 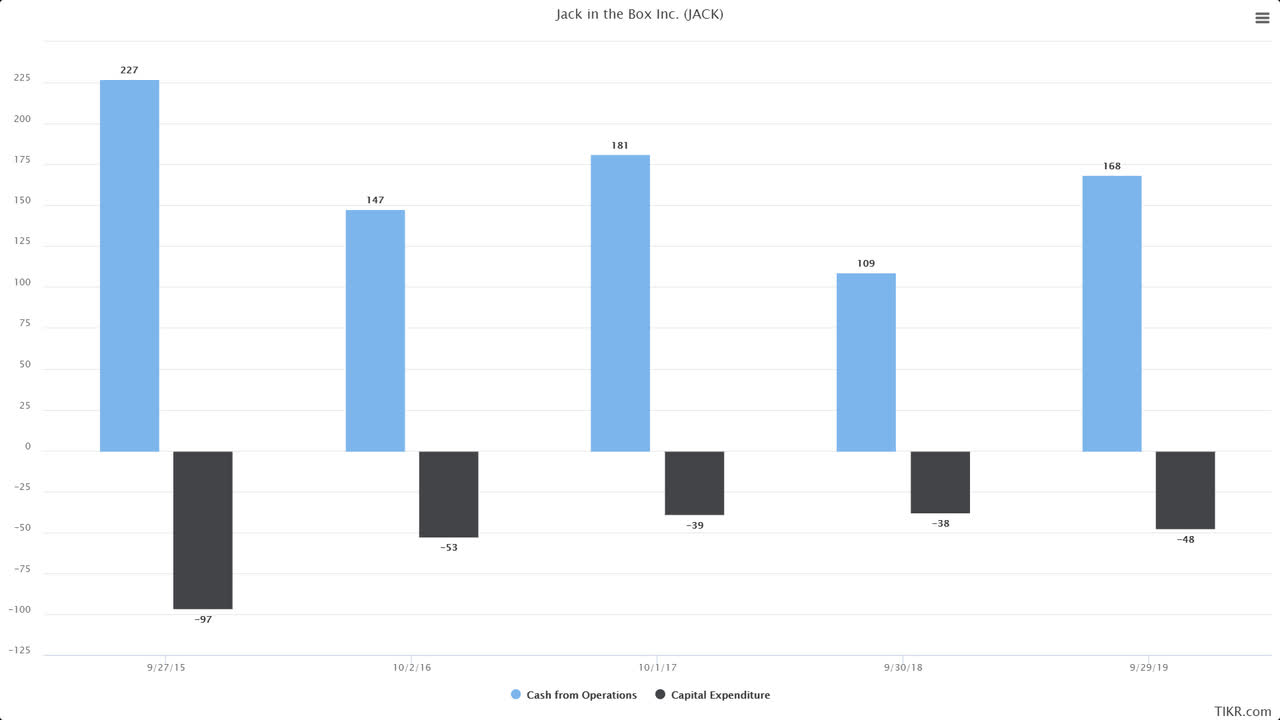 This chart shows the company’s cash from operations and capex, both in millions of dollars, for the past five years. We can see capex dwindling over time, and while it will never be zero, less than $50 million annually in capex is quite easy for JACK to afford with internally-generated cash.

Indeed, cash from operations has dwarfed capex in recent years, freeing up more than $100 million annually, on average.

JACK has made good use of this cash, as we can see below, with dividends and share repurchases depicted in millions of dollars. 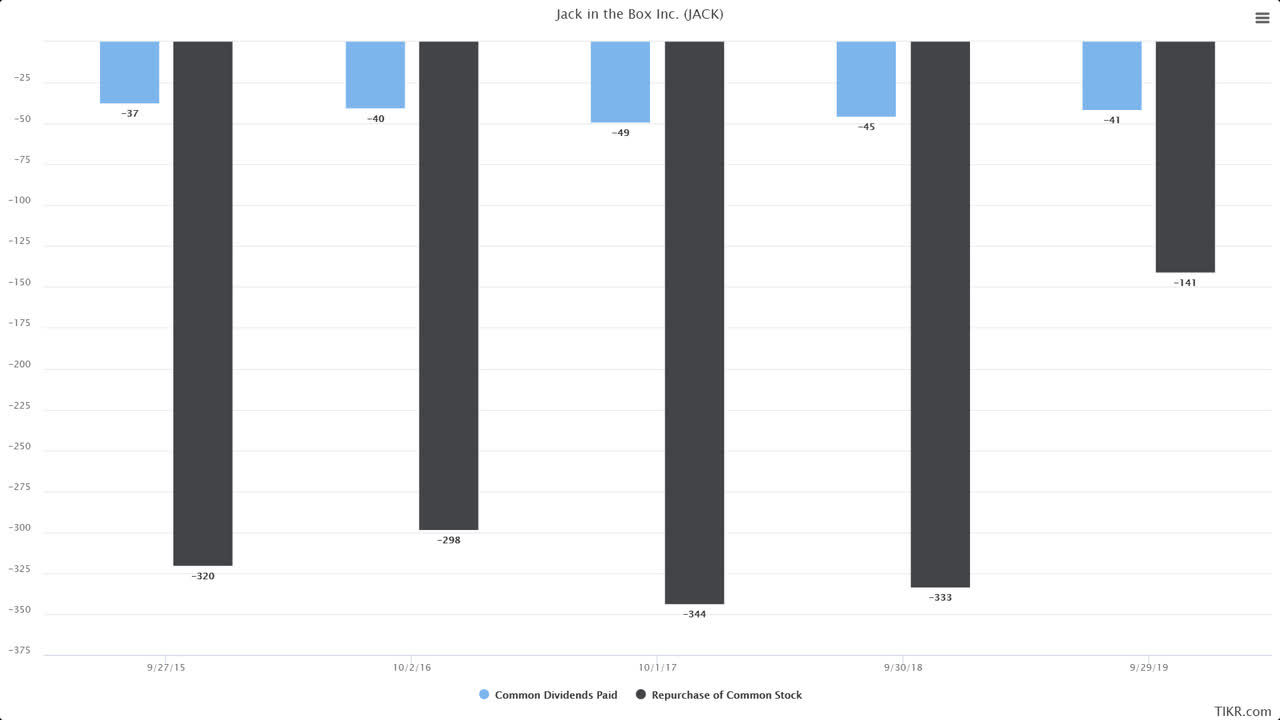 JACK has spent extremely heavily on share repurchases, while also offering a decent yield, although I’d suspect not many have bought JACK just for the yield. The company’s cash usage has focused heavily on reducing the float, and it has worked over time. 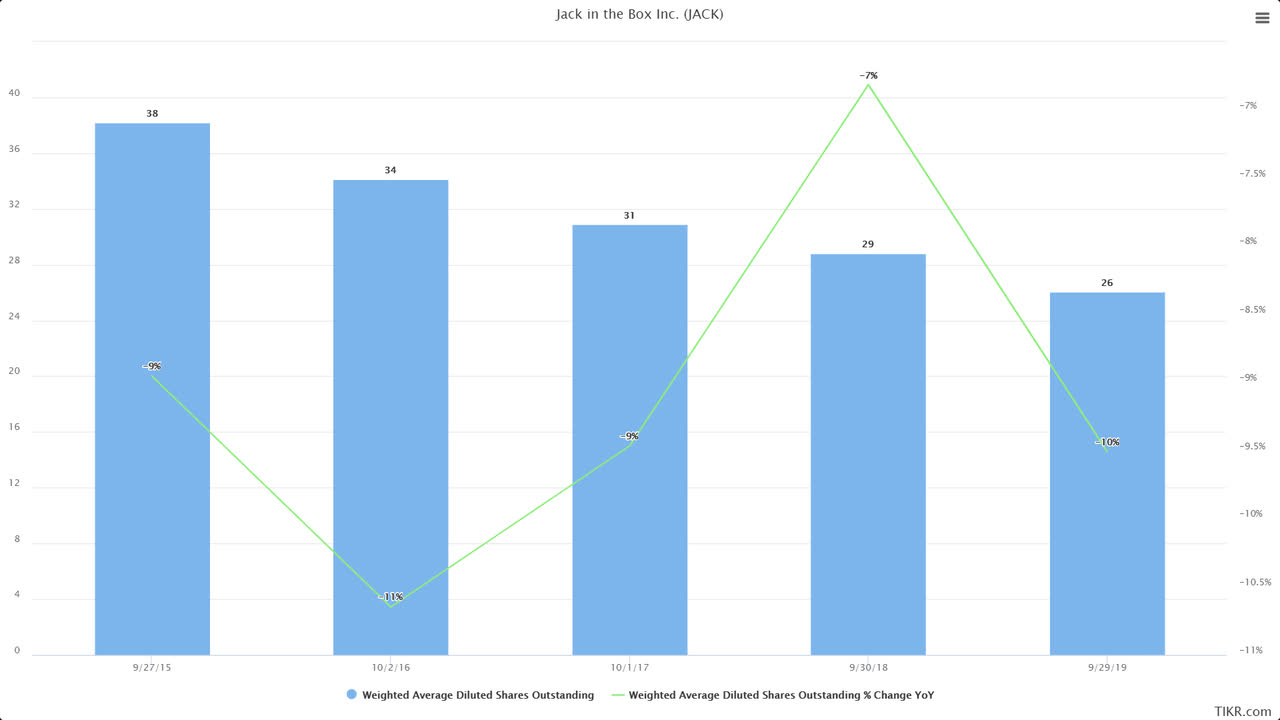 The share count has fallen from 38 million to just 26 million in the past five years, sporting huge reductions each year thanks to robust repurchase activity. The company has $100 million left on its current authorization, good for just over 5% of the float, and if history is a guide, it won’t take long for that to be used. This provides a tailwind for buying in the open market, which helps support the price of the stock. It also makes the remaining shares cheaper on a relative basis as more earnings are spread over each share. Put another way, EPS rises because the share count is shrinking.

But is it too late to buy?

We’ve seen that JACK is in a weak industry, and isn’t outperforming that weak industry, so I’m cautious. The other thing is that the stock is about 5X the price it was at the bottom a few months ago, so a huge rally has already taken place. That doesn’t mean it cannot continue, but it does mean the easy money was made back in March and April.

Below, we can see that the valuation of JACK is actually pretty reasonable despite the huge rally, as earnings have bounced back more quickly than probably most people thought, yours truly included.

Revenue growth is slated to average something like low single digits for the foreseeable future, which is much less than what is shown above. That implies that margin expansion and share repurchases will carry the load, but keep in mind that the share price has soared, making share repurchases less effective, and margins have already climbed enormously as a result of the refranchising initiative.

With that initiative substantially complete, I see it as imprudent to expect margins to grow into the stratosphere because the bulk – or potentially all – of the available margin gains have already been seen. In other words, the things that have powered EPS growth in recent years – share repurchases and margin growth – could very easily be slowing down while the stock is trying to make new highs.

If that’s correct, the only thing powering the stock would be higher valuations assigned by investors, and while that’s possible, we’re already at 17 times next year’s earnings for a company with normalized EPS growth in the high single digits. That seems like fair value to me, so I wouldn’t necessarily bet on further sustained PE expansion.

The bottom line is that JACK has made a lot progress fundamentally, but I think that is already reflected in the share price. And given that it isn’t outperforming its benchmark, and that benchmark isn’t keeping up with the broader market, there are many better places to put your money today.