At Option Generator, we believe that the real edge lies in high-probability option strategies, but the gap between choosing naked and covered positions is huge. Although covered and naked option selling theoretically have a similar probability of success, i.e., win rate, there’s one aspect we cannot overlook: the distribution graph and more specifically the tail risks. Let’s take a look at the two different approaches. In this article, we also share great insights into our latest study on American Tower (AMT) and Crown Castle (CCI) regarding buy and hold investing and in-the-money covered calls, excluding dividends.

Whereas covered positions with an 80% probability of profit (in this article, we’re going to talk about ITM covered calls) see small outcomes, the naked option selling strategies like short strangles and short straddles tend to see wide-ranging distributions in their returns.

Theoretically speaking, a 1 SD short strangle with 45 days to expiration should have a probability of success of 68% (100% – 2 times 16%). In reality, the average win rate considerably exceeds that threshold (about 84% at expiration without managing the trade throughout the cycle). Also, in the end, we are expected to make a decent profit on the trades (about $600 on an SPX strangle every single month). Without looking at the distribution graph, one would argue that a short strangle is a great strategy. However, the average and even the median along with the consistently high win rate are misleading.

As one can notice from the graph provided above, the profits of short strangle trades over the past 15 years have been anything but normally distributed. In fact, they are gigantically negatively skewed. Since we cannot predict future stock market returns, short-term movements, and future implied volatility, novice traders are at risk of interpreting the data incorrectly, i.e., not paying enough attention to outlier moves.

Therefore, one cannot fully understand the risk of trading short strangles, even when putting on trades that are non-correlated with each other. Moreover, short strangles have margin requirements which can change dramatically if the portfolio is too heavily exposed to naked positions.

Also quite important to note is that during implied volatility expansion, all stocks in your portfolio will start becoming more positively correlated to the overall market. In addition to that, options become more expensive as well, creating losses on short premium positions.

The difficulty of trading short strangles is that you cannot know the most optimal allocation percentage beforehand. Should I spend 10% of my buying power to strangles, or 20%? Driven by greed, most naked option sellers go ‘too big’ while underestimating the tail risks.

As part of the greatest study we’ve ever conducted on our premium watchlist and our option strategies, the data of 8% in-the-money covered calls (forward 1-year returns) in every market environment from June 2010 to June 2019 are presented below (107 data points). More details on the returns for ITM covered call in any VIX environment can be found HERE.

Based on the standard deviation in the forward 1-year returns of 1.82% – if one would have continuously sold in-the-money covered calls every single month – and an average return of 4.82%, we get the following distribution graph. 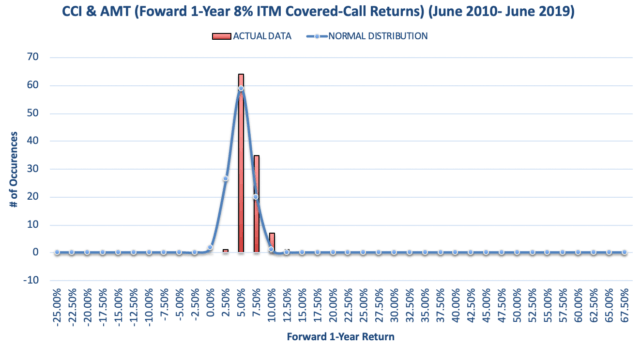 We see that the actual data are skewed to the upside whilst smaller returns close to 2.5% are less frequent than expected, caused by high VIX readings. This also implies the fact that implied volatility in AMT and CCI tends to be overstated on a forward 1-year basis. In short, a very narrow distribution and thus a lot of consistency in ITM covered call returns.

More outliers to both the downside and upside. Moreover, given the average return of 14.42%, one would expect to see the highest probability of achieving this return in a normal distribution model with little standard deviation. Since most of the buy-and-hold returns are centered at 7.5% and 27.5%, predicting future returns is much harder than in case of the in-the-money covered calls. That’s because of the 11.93% standard deviations in forward 1-year returns for 107 months worth of data. 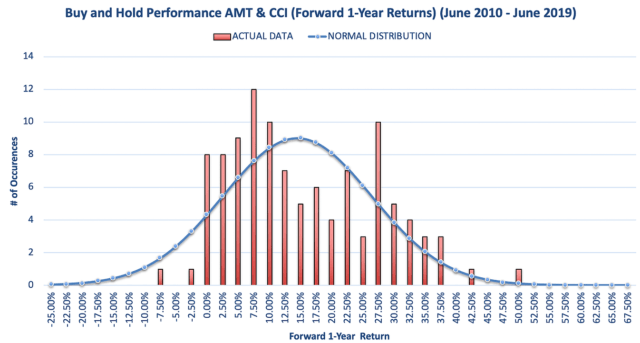 The correlation between selling in-the-money covered calls and buy & hold investing on CCI and AMT is a moderately positive 0.23. This is very important: it shows that although you’re utilizing the same underlings, correlation between the returns can be reduced by strategy diversification, i.e., a simple covered call strategy to reduce the breakeven and potentially benefit from higher implied volatility. This leads to lower standard deviation in our returns and theoretically a smaller probability of suffering a significant drawdown. This logic is backed by the box plot below.

Focused on the information already provided in this article, what is the edge of buying stock versus selling options in a covered fashion?

Based on a Monte Carlo simulation (utilizing historical data to determine standard deviation and the mean return and random probabilities), even low-volatility stocks such as American Tower and Crown Castle have outlier risk, i.e., a 1.90% probability of seeing negative returns after 3 years of investing in AMT. 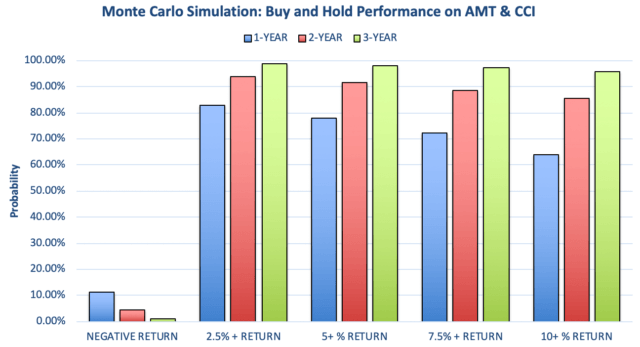 For defensive in-the-money covered calls, the picture is completely different. A high probability of profit and a virtually zero chance of losing money after 3 years. 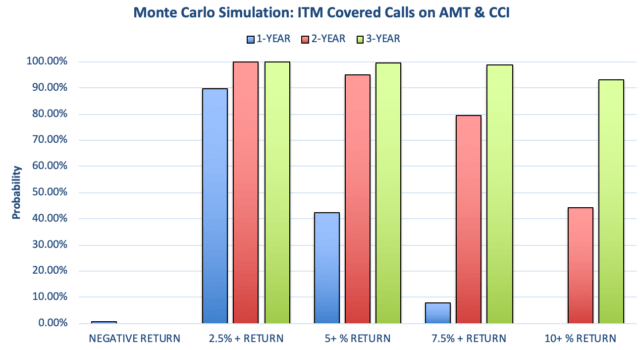 Breaking the probabilities down per return, we get the following random probabilities (but still somewhat based on conditions derived from historical outcomes). For example, there’s a 9% chance of seeing a 12.5% profit in year 1. More importantly, by going further out in time, we create more uncertainty about the outcomes.

As for the in-the-money covered calls, we still see those same narrow distribution ranges. More consistency, smaller chances of losing money and a predictable path towards capital appreciation.

A covered option strategy such as the in-the-money covered call is a go-to strategy if you want the probabilities to work out well over the long run. Especially in this market environment, underestimating tail risk when selling naked options can be a costly mistake as the returns are far from normally distributed. Even buying low-volatility stocks such as AMT and CCI comes at an elevated level of uncertainty.

In high IV, selling in-the-money covered calls leads to elevated returns while the standard deviation in those profits doesn’t increase significantly. More importantly, selling an in-the-money covered call is only moderately positively correlated to the buy-and-hold performance as we generate time value, lower our breakeven instantaneously and have a smaller directional bias on the underlying. By selling options in a covered way, we reduce the standard deviation in our returns and thus the risk of facing a huge drawdown.

Disclosure: I am/we are long CCI AND AMT VIA ITM COVERED CALLS. I wrote this article myself, and it expresses my own opinions. I am not receiving compensation for it. I have no business relationship with any company whose stock is mentioned in this article.

No Shortage of Event Risk Next week sees earnings season get underway in the US, with the major banks all reporting on the second quarter and offering insight – if they have any – into […]