It’s hard to find a tech product where memory is not being added and expanded, this year especially – servers, smartphones, gaming consoles, GPUs, etc. More specifically, on the non-volatile side, which spans SSDs (solid-state drives) and HDDs (hard disk drives), there is a tremendous shift to more performance-driven SSDs and capacity expansion therein.

Micron (MU), Taiwan Semiconductor (TSM), Samsung (OTC:SSNLF), and SK Hynix (OTC:HXSCF) all had good things to say about the back-half of the year after an excellent first half. Micron sang datacenter, mobile, and console praises for a healthy second half and guided above consensus on its FQ3 earnings call. All of those verticals involve non-volatile memory and a lot of it. If you need a refresher:

Looking ahead to the second half of calendar 2020 … we expect the data center outlook to remain healthy. Second, we expect smartphone and consumer end-unit sales to continue to improve, accelerating inventory consumption across the supply chain. And third, new gaming consoles will drive stronger DRAM and NAND demand.

However, Western Digital (WDC) didn’t sing the same tune, or perhaps even the same genre of song. To start, it appears the company is more affected by the retail side of the pandemic than its competitors. Secondly, it’s also not in the mobile business in any meaningful way.

Starting with mobile, the company doesn’t have a presence worth mentioning, at least one it could capitalize on.

So as you know, we’ve been underweight mobile for quite a while. We continue to be underweight in terms of mobile. Now if that business is lower than was anticipated, our competitors need to find homes for those bits. So, we’re not completely insulated from the challenges on the mobile side because they do need to move into other markets in order to move the bits.

What Eulau is saying is even though it isn’t in the mobile business, when things are tough on the mobile side, its competitors need to shift those bits to other verticals, which adversely affect the company. Why? Because those extra bits getting offloaded from weaker mobile sales get brought to the markets Western Digital is in and causes a supply/demand imbalance. It means the company fronts all of the downside and none of the upside. Micron, for example, is looking at a resumption of mobile demand as it heads into the next quarter. Western Digital’s guide doesn’t include a boost from mobile.

Before getting deeper into the company’s guidance, which is what sank the stock, allow me to finish with the retail problem; it was a big enough issue to make the prepared remarks:

Finally, in retail .. we were impacted by COVID-related lockdowns at many of our brick-and-mortar customers. We did see the business recover as the quarter progressed due to easing of lockdowns and the transition to online buying with curbside pickup.

This led to Client Solutions revenue of $687M, which was down 16% sequentially and down 9% year-over-year. This was a major driver of the weak quarter, which missed by over $57M on the top line. In other words, the company has a retail dependence, which puts it closer to a retailer than some would think. While others have capitalized on the markets which got a boost from COVID-19, WDC feels more headwind than tailwind due to their relatively more significant retail dependence.

This brings us to the guide, which was not encouraging. This is what sank not only Western Digital but Micron as well. The guide came in at $3.8B at the mid-point versus consensus of $4.36B. However, the market moved too quickly and tied the two companies together.

This piece from the earnings call sums it up pretty well – reliance on retail:

…some of the businesses are like a retail business, what the trend that’s going on there and what do we see and what may be disruptions. For example, in the period ahead, we typically see a back-to-school cycle. It’s unclear what that’s going to look like. So that puts some variability in the forecast.

Then on the other side, we have to remember Western Digital is not just a NAND company; it’s also an HDD company. 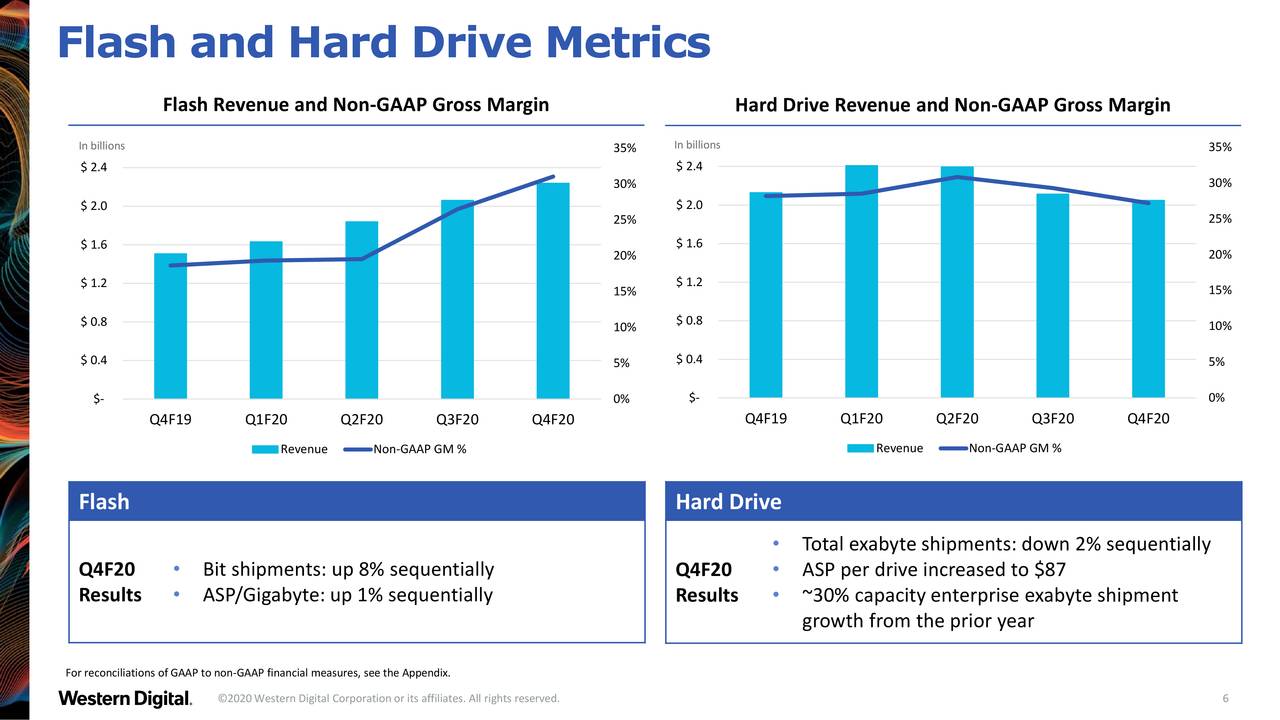 It’s competing against itself in terms of outrunning the HDD decline. As hard drives become less enticing due to the cost-effectiveness of SDD in terms of performance, it will become a steadier headwind – a headwind that is already pretty stiff.

Getting to the crux of the matter, four things separate Western Digital from Micron. The first is that Micron does not deal with HDDs. Unlike Western Digital, this headwind is not one Micron sees. Micron would love nothing more than to displace HDDs.

The second is the retail impact Western Digital feels is far less insulated than the one Micron feels. Micron not only is pushing toward high-value solutions but also is focused on higher-value industries, products in high-performance industries such as data center, graphics, mobile, and automotive.

Lastly, while Western Digital saw strong growth in the data center, it doesn’t get the lift of mobile. It only feels the depression of mobile. Micron can realize the capacity increases and unit volume boost of mobile handsets in the second half, whereas Western Digital will sit it out.

Furthermore, this past quarter would have been one where mobile would have turned the quarter around for WDC. Micron saw the most growth in mobile this recent quarter out of any other segment with 21% quarter-over-quarter growth and 30% year-over-year growth.

Finally, Micron is getting better pricing for its NAND than Western Digital. Micron’s ASPs for NAND were up mid-single-digits percentage for March-May while Western Digital’s were up 1% for April-June.

If you’re thinking about going long Western Digital, you have to consider these shortcomings.

Will WDC benefit from the overall NAND trend of the future? Yes, it will. Can it do it quickly enough to offset the dying HDD market? It remains to be seen. At $35 per share, it becomes enticing.

But, without a dividend or an idea of when the dividend will be “unsuspended,” it makes a tough case to go long. Management has put shareholder returns at the bottom of its priority list. Micron, on the other hand, has finished its debt reduction priority, and so it can focus on reinvestment and shareholder return programs. 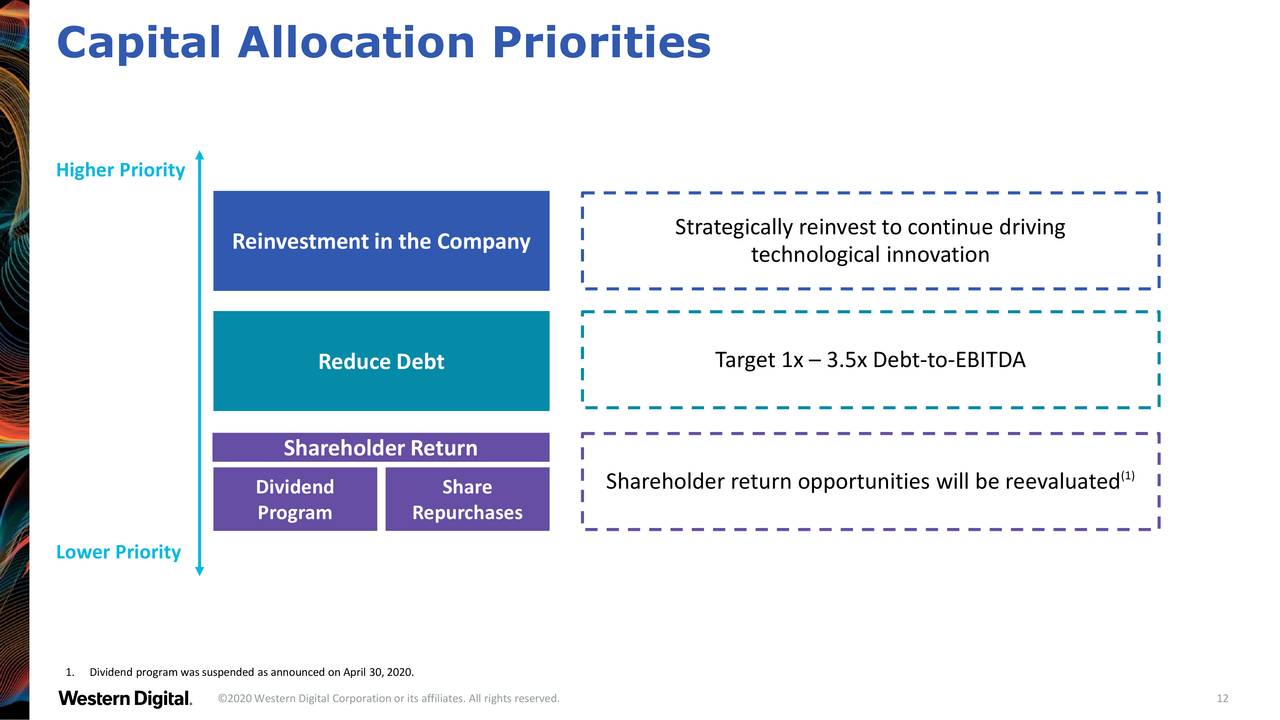 I still own WDC at an average price of ~$40, but I am wondering if I should lighten up on it and find better opportunities. The market hasn’t been shy in saying semiconductors such as Micron, Western Digital, and Seagate (STX) are out of favor. It’s difficult, and some would say unwise, to go against the tide. For an investment in WDC to work out, you have to not see it as a value trap, for one, but also be ready for a year of this working itself out. A year from now, the priorities may allow the dividend to be reinstituted, but it depends on how well the product portfolio pans out for the company and how quickly debt reduction goes.

Currently, the company’s debt-to-EBITDA is at 5.3x (annually) whereas the top side of its targeted range is 3.5x. With EBITDA set to decline 40% based on my calculations for FQ1, this is going to take at least a year to get to just the top end of the debt-to-EBITDA range. This includes using all the company’s free cash flow going toward debt repayment over the next year. I also take into account the company performing sequentially better after FQ1 for the rest of the fiscal year.

Now, these structural differences do not mean Micron doesn’t have its own headwinds to deal with; it merely means the extrapolation of Western Digital’s performance is not a correlation to Micron’s future performance. You must break down the differences between the two companies – and there are quite a few – all of them crucial to the investment thesis for Western Digital.

Micron is signaling some new worries, which I’ll expand on in another article, but to use Western Digital as a barometer for Micron is not a valid method of analysis. Western Digital is dealing with its own struggles. I’d consider adding to Western Digital if retail continues to pick up. Put more plainly, consider WDC a post-COVID-19 investment. Right now, it’s in the dumps, and it’s due to the management of its portfolio and what verticals it’s heavy in (or not heavy in) during these trying times.

Of course, we can look at this a little differently and say this may be the time to pick up shares (buy low, sell high), but I see WDC as dead money for longer. I can at least tell you Micron understands the idea of focusing on the high-valued verticals. I can’t say the same for Western Digital.

Make Cash With My Cache

Get alerted to my tech sector analysis by clicking the follow button at the top of this page next to my name. Get further insight along with my technical chart analysis on Western Digital and Micron by joining my Seeking Alpha service Tech Cache. You also get real-time, chatroom access to ask me followup questions and hear ideas of other Tech Cache subscribers. You can try it risk-free with a 2-week free trial!

Disclosure: I am/we are long MU, WDC. I wrote this article myself, and it expresses my own opinions. I am not receiving compensation for it (other than from Seeking Alpha). I have no business relationship with any company whose stock is mentioned in this article.