– The IG Client Sentiment Indexsuggests that crude oil prices are still on uncertain grounds – neither bullish nor bearish.

Energy markets have had a volatile January so far, defined by the ebbs and flows of the geopolitical tensions between the US and Iran. But with the news wire quieting down, energy markets found stability as well: crude oil prices only dropped by -0.71% last week after losing a massive -6.13% in the first week of the month. Meanwhile, Brent oil rose 0.14% last week after a -5.22% drop in the first week of January.

The latest data from the US EIA released on Thursday, January 16 revealed that oil inventories decreased by a much greater amount that anticipated, by 2.5 million barrels against an expected drawdown of 474K barrels. But with US crude oil production hitting an all-time high at 13 million barrels per day, energy inventories rose elsewhere across the board.The resiliency of crude oil prices during this period of rising supply is noteworthy as it speaks to commensurate demand helping keep prices stable.

The US economy ended 2019 on weak footing, largely due to the overhang of the US-China trade war. Expectations remain dour, as the Atlanta Fed GDPNow Q4’19 GDP estimate is at 1.8% while the NY Fed Nowcast is only 1.2%. After a rebound in global PMI figures at the end of 2019, there has been some scuffling at the start of 2020.

Finally, looking at positioning, according to the CFTC’s COT for the week ending January 14, speculators decreased their net-long Crude Oil positions to 530.3K contracts, down from the 567.3K net-long contracts held in the week prior. Net-longs have fallen for just the first time since the end of November. It’s still the case that crude oil net-long positioning remains far below the highs seen over the past two years, when 739.1K net-longs were held during the week ending February 6, 2018.

As is often the case during the second half of the month, the forex economic calendar tends to pick back up and yield more meaningful data releases that would otherwise hold sway over energy markets. This week, there are three central bank meetings: the Bank of Japan on Tuesday; the Bank of Canada on Wednesday; and the European Central Bank on Thursday. Additionally, inflation data due from Canada, Japan, and New Zealand are likely to leave their mark as well. 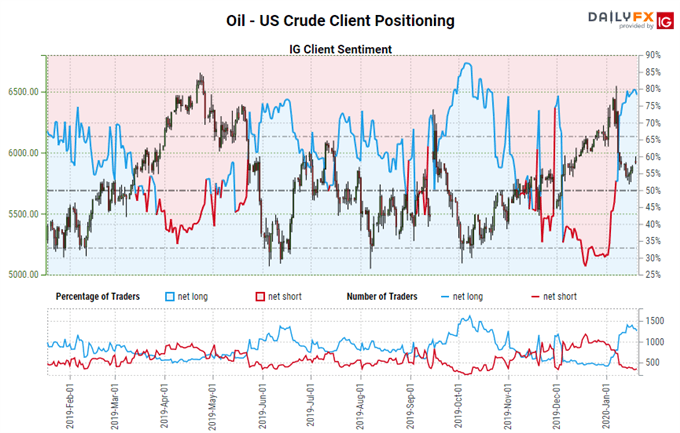 We typically take a contrarian view to crowd sentiment, and the fact traders are net-long suggests crude oil prices may continue to fall.

Positioning is less net-long than yesterday but more net-long from last week. The combination of current sentiment and recent changes gives us a further mixed crude oil trading bias.

View our long-term forecasts with the DailyFX Trading Guides

delihayat/E+ via Getty Images Were you caught by surprise at the market selling off this hard to start the year? We will admit that we were caught slightly off guard by how soon the market […]

As you get your FOMC price action setups and fundamental forecasts in order, DailyFX is here to help. Our very own CEO of IG US Pete Multant and Global Head of Content John Kicklighter just […]