Welcome to our Weekly Cannabis Report, a reliable source for investors to receive the latest developments and analysis in the cannabis sector. 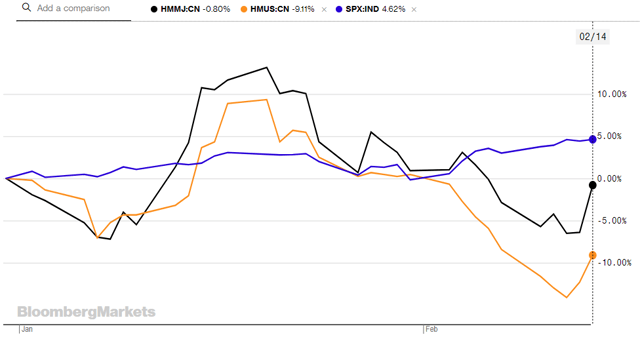 (Source: Author, based on public data)

The U.S. and International: Curaleaf (OTCPK:CURLF) lost 2% after the HSR period expired for its Grassroots acquisition. Trulieve (otcpk:TCNNF) rose 5% after opening its 45th dispensary in Florida. MedMen (OTCQB:MMNFF) dropped another 24% bringing its 2020 YTD losses to 44%. 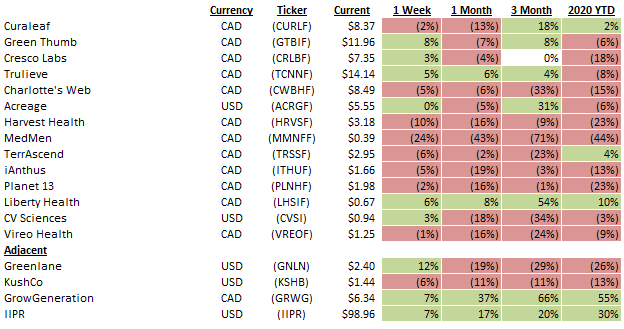 (Source: Author, based on public data)

Both Canopy and Aurora reported earnings last week for the last three months of the calendar year 2020. While Aurora pre-announced its weak results, including consecutive substantial revenue declines and staff reductions, its official financial results revealed further pressure on all fronts of its business. Canopy’s results were slightly better, but, after careful analysis, one could find many signs that the company has already begun downsizing meaningfully in light of the current industry outlook.

Canopy and Aurora are both burning a ton of cash from just operations. In their latest quarter, Canopy spent C$150 million while Aurora spent C$106 million on sales and marketing, R&D, and general administration. Although they are both multi-billion-dollar companies, the issue here is that they aren’t making enough profits to cover these costs. Canopy reported gross profits of C$42 million while Aurora reported gross profits of only C$23 million. Canopy and Aurora both need to increase their gross profits by 4x in order to just meet its current operating expenditures, let alone profits. That’s why it is almost inevitable for both companies to begin downsizing in order to cut costs and improve profitability. In the case of Aurora, the company is already cutting costs by firing employees, selling off idle properties, and reducing all non-essential services and costs. Canopy did not announce any cost-cutting measure when it reported Q3 but we think the company is still working out its strategy under the new CEO. We think there is a high likelihood that Canopy will reduce its workforce and rationalize its footprint by shutting down or curtail production at some of its large greenhouses.

Both companies have also begun cutting back on production. For the quarter that was just released last week, compared to the previous quarter, Canopy cut its harvest volume by 26% to ~30k kg and, by coincidence, Aurora also cut its production by 26% to ~31k kg. With sales stagnating and sales volume far below productions, we think the industry is taking aggressive steps to roll back harvest in order to alleviate oversupply and reduce inventory cash burns. Canopy produced ~30k kg of cannabis last quarter while selling only ~13k kg, and Aurora similarly only sold ~9.5k kg while producing ~31k kg last quarter.

Looking ahead, we think investors should embrace continued softness in revenue growth as the Canadian market struggles to grow even after the initial launch of 2.0 products under heavy regulation. However, as new management begins aggressive cost-cutting, we think companies will show improved profitability and reduced cash burn. Although most Canadian companies are still far from being profitable and cash-flow positive, the key would be revenue growth as cost-cutting alone won’t be able to go far enough. As we saw from two of the largest industry players last week, the cannabis industry still has many obstacles to overcome before it could improve its bottom line.

petesphotography/E+ via Getty Images Is the market bottom in, or is this more a replay of the fleeting Q1 quarter-end bear market rally? Is the “fix in” for European bonds? Does Kuroda’s foolhardy cling to […]