A new report from Piplsay Research is making waves in the news: Walmart (WMT) is seeing rapid adoption of its Walmart Plus (W+) subscription service, with 11% of survey respondents saying they’ve already signed up for the two-week-old program. Interestingly, nearly 20% say that they’ve migrated from Amazon (AMZN) Prime. The poll involved 20,000+ Americans, so it’s not that small a sample size, and the positive implications on Walmart’s performance in Q4-21 and beyond could be considerable.

Thesis: Walmart+ represents a significant unrealized upside for Walmart. Extrapolating from the poll report, we could see a rapid uptake in memberships over the coming months, giving the company a solid foundation for strong revenue growth in Q4-21 and beyond.

What is the Potential for Walmart Plus?

One interesting takeaway from the poll’s results is the fact that 36% of the 11% (or about 4% of the total survey sample) who have already subscribed to Walmart Plus said it was their first such shopping subscription, implying that they are not and have never been Prime members. Calculating the total number of households in the United States using a population figure of approximately 330 million and an average household size of 2.6 members, we arrive at a potential subscriber base of about 127 million households.

By extrapolation and assuming one membership per household, that means about 14 million households in the U.S. are already Walmart Plus subscribers. Moreover, the 4% who fall outside of Amazon’s current membership base represents about 5 million households already on W+. In addition, 19% of the 11% said they migrated from Amazon Prime, which is about 2.7 million. In short, of the 14 million currently assumed to be W+ members, 5 million have never been with Prime and another 2.7 million have moved away from Prime.

This is significant because Walmart shoppers aren’t all tech-savvy, which means the company can harvest millions of subscriptions from those who haven’t yet subscribed to Prime but are already customers of Walmart and want to take advantage of the perks of W+. Furthermore, the fact that Walmart’s shopper demographic skews toward lower-income households means that it will take away market share from Prime in those segments.

This assumption becomes more evident when you look at the typical shopper demographic across large retailers.

In terms of annual household income, there are more Walmart shoppers than Amazon shoppers among lower-income households. The difference in average income isn’t stark – $76,000 for Walmart vs. $84,000 for Amazon – but the lower the income, the stronger Walmart’s reach in that segment. On some level, most consumers already know that, but there’s hard evidence to back it up. And it is now showing up in W+ subscription trends.

The reason this is hugely relevant is that personal income and personal consumption expenditure in Walmart’s biggest market, the United States, are both still at very low levels compared to pre-pandemic times, and August was one of the worst months since the short-term boost to the economy from the first round of stimulus checks and extra unemployment benefits. 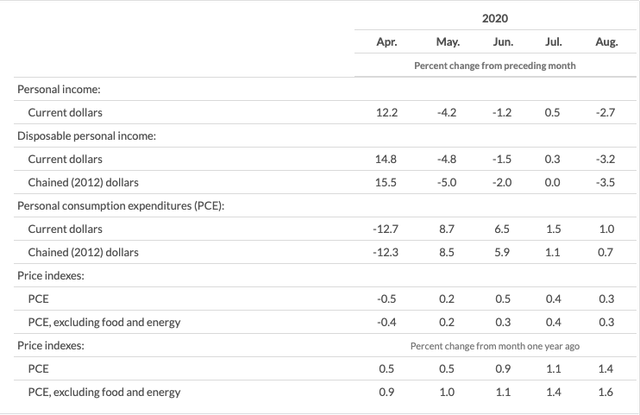 Add that to the fact that shoppers are consolidating their trips and buying more per physical shopping trip, and it’s easy to see why American shoppers would pay the $98/year or $12.95/month subscription fee for W+ and take advantage of not only free unlimited delivery for orders over $35 but also fuel discounts and ‘scan-and-go’ shopping at Walmart’s outlets. There are already 103 million downloads for the Walmart Shopping & Grocery app on Google Play, and the company is actively promoting W+ to those users. Walmart also plans to keep adding perks to what will likely become a Prime-like list of benefits. Over the crucial holiday quarter, we could see a flood of deals and discounts as Walmart pushes its subscription service to a cash-strapped American public. All this points to a massive subscription uptake and strong potential revenue growth in Q4-21, the all-important holiday quarter.

But even beyond FY-21, W+ will help drive customer loyalty and increased spending as the economy limps back to normalcy but the average consumer continues to seek the most value from every dollar spent. This could be the beginning of a new growth phase for Walmart.

How Big Can Walmart Plus Get in the Short Term?

If the recent poll is anything to go by, we’re looking at a possible subscription base of 14 million in the first two weeks. That’s already more than 10% of the 112 million members that Amazon Prime was estimated to have in the United States at the end of 2019. 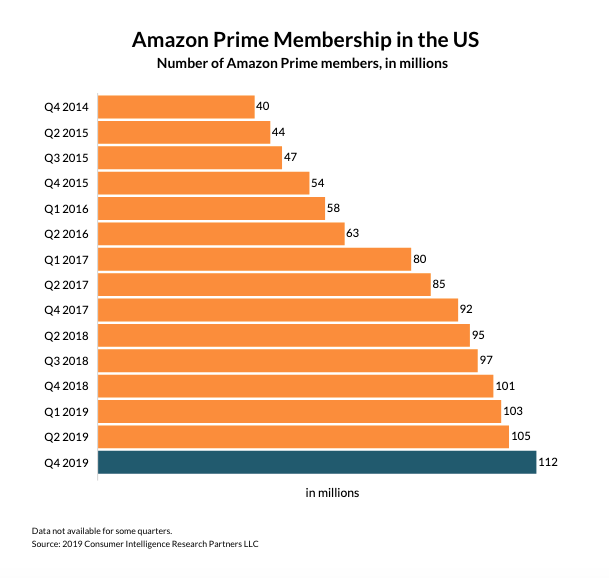 Apart from the 11% who are already on a W+ plan, another 27% said that they may take up a subscription soon. That translates to roughly 34 million more shoppers, bringing the total short-term potential subscriptions to around 48 million members.

The timing is perfect because, as we ease into the holiday quarter and uncertainties build up in the economy, more shoppers are likely to want discounts, deals, cheaper fuel, free shipping, and other upcoming benefits from a household name like Walmart. From that perspective, even 48 million seems like a conservative estimate.

Round it off to 50 million and this is what subscription revenues for Q4-21 could look like:

What we’re potentially looking at is a (conservative) ballpark figure of $1 to $1.5 billion in subscription revenues over a three-month period, most of which will be reported in Q4-21.

And that’s not counting the additional spending that is typical of members. For Prime, the figure was $1,400 spent annually by Prime members against $600 spent by non-Prime shoppers. We may not see the same split or spend level with Walmart shoppers considering the lower-income demographic and the current depressed economy, but it’s clear that there are billions of additional dollars on the table in Q4-21 and beyond.

This is further supported by Walmart’s eCommerce growth reported in Q2-21 and H1-21:

The biggest short-term risk is a sudden contraction of gross margins if there’s an abnormal surge in eCommerce activity, which is almost a given at this point.

The increase in the gross profit rate for the three months ended July 31, 2020, was partially offset by investments in price and higher eCommerce fulfillment costs.

The increase in the gross profit rates for the six months ended July 31, 2020, was partially offset by investments in price and higher eCommerce fulfillment costs.

Put another way, in Q2-21 and H1-21, the margin contraction from eCommerce fulfillment and pricing was more than offset by an overall improvement in gross profit rate; but, for Q4-21 in particular, we might see low-to-flat gross margin growth as the best-case scenario and lower gross margins as the worst.

ECommerce sales contributed 6% and 5% to comps growth in the Walmart U.S. segment for Q2-21 and H1-21, respectively. Combined with price investments, they created a significant headwind for gross profit margins in both periods. In the table above, we see that it virtually wiped out any margin gains in H1-21 over the prior period.

Considering that the gross profit rate gains of 105 basis points and 64 basis points for Q2-21 and H1-21, respectively, were primarily driven by short-term forces like “higher fuel margins, lower markdowns, and improvements in inventory losses,” we could definitely see a margin hit when eCommerce starts contributing much more to overall comps growth and the top line; specifically, in the Walmart U.S. segment.

The confluence of these factors points to significant top-line growth over the next few quarters. Q3-21 has already passed and will not see the bulk of growth benefits from the launch of W+ (or the margin hit), but Q4-21 will definitely be a quarter to watch, as will subsequent quarters.

The news of rapid W+ adoption should have helped the stock rally in a strong way but, after an initial 5% surge, the stock is trading at around 3% higher as of this writing. The market is cautious for several reasons – the general state of the economy, still-elevated unemployment rates, delays with the second round of economic aid, and the President’s health. Such an environment represents the perfect opportunity for long-term investors to add to their WMT positions.