Virgin Galactic (NYSE:SPCE) is a company that has been heavily covered for both the right and wrong reasons. Initially formed in 2004 by Richard Branson, the well-known multi-billionaire British magnate, Virgin Galactic is now aiming to take its first customers into space in 2021. For many people, Virgin Galactic may encompass a lot of what is wrong with the market. It’s a company that has zero revenues with a market cap of $4 billion. Whilst the company should remain as a speculative play in one’s portfolio, Virgin Galactic does not have to achieve profitability to unlock near-term shareholder value. It would have multi-bagger potential if it can achieve strong profitability, but merely being the first to achieve commercial space flight travel will ‘excite’ the market and should lead numerous new investors to shares. Whilst I wouldn’t weigh in heavily on Virgin Galactic, I see it worth a small position in my portfolio, particularly after the recent pullback in the company’s shares.

Virgin Galactic has the first-mover advantage in the commercial passenger space race and has the technological development to back that up. Virgin Galactic has designed and built ‘SpaceShipTwo’, which is the world’s first passenger-carrying spaceship. Both this and the company’s other ship ‘WhiteKnightTwo’ have been specifically and precisely built to suit the company’s needs and to make their space tourism plans as efficient as they possibly can be. Whilst this efficiency matters little at the start, as it’s more a matter of proving the viability in delivering space tourism to begin with, over the long run, it will be vital in achieving sustainable and superior profitability.

Meanwhile, the first flight will be about proving they can deliver passengers safely to and from space. The first passenger will be Richard Branson himself, which is an important PR step to show the world that the founder himself believes in and trusts the experience that he set out to create.

Virgin Galactic does have competitors in SpaceX and Blue Origin, both of whom were extensively covered in a recent article by Robert Vink on Seeking Alpha. However, I am doubtful of their ability to deliver commercial flights within the next couple of years. Virgin Galactic has communicated delays to its first commercial flights recently, and this will be frustrating for investors, but the company’s current aggressive launch schedule is still well ahead of both the SpaceX and Blue Origin schedules. In fact, the Virgin Galactic schedule could accommodate further delays and still beat the competition to launch the world’s first commercial space flight.

To me, the most important component of the Virgin Galactic offering to investors is their hybrid rocket motor named ‘RocketMotorTwo’. This rocket motor is at the core of their technology offering and will be the propulsion that launches ‘SpaceShipTwo’ into space. Virgin Galactic may also look to sell this advanced technology onto other industries further down the line, and this technology helps to form the company’s ‘defense’ against its competitors. The technology also benefits from a long development cycle which has come about due to the extensive time Virgin Galactic has spent gearing up for commercial spaceflight. The first-generation hybrid rocket engine was developed by the Sierra Nevada Corporation in the late 2000s, and the second generation engine is now made in-house by Virgin Galactic.

Virgin Galactic’s continuing first-mover advantage would have huge commercial significance and should deliver upside to shareholders. First, there will be the huge PR traction that Virgin Galactic would obtain through being the first to deliver commercial passenger space flights. The first commercial flight will be a heavily followed global event that will bring huge awareness of the Virgin Galactic brand. Not only this but it will also bring the commercial space flight experience to the attention of the super-wealthy across the world. Whilst Virgin Galactic’s total deposits so far may seem relatively small (700+, totaling over $80 million), these bookings are reported to have filled up the whole first year’s capacity of commercial flights for the company. Not only this, but investors must also note that many potential customers will be waiting to see the viability and safety of space travel first before placing their order. In fact, Virgin Galactic has not been actively looking for customers since 2014, as they have placed a far greater focus on getting their service commercial ready and getting FAA approval.

They have the cash

Virgin Galactic recently announced a public offering of $460 million of equity which was taken up by the market. Although frustrating for investors at the time as it was offered at a discount to the prevailing share price, this new cash will significantly bolster Virgin Galactic’s liquidity position. The company’s positive cash position at the end of June was $360 million. With the new liquidity injection arriving in August, the company will now have around $800 million of total liquidity, following a month and a half of continued expenses since the June cash balance was announced. In the public offering documents, the company said that they intended to use the proceeds of the offering for general corporate purposes such as working capital. This new offering will now provide Virgin Galactic with plenty of runway as they ramp up operations to commence the all-important first commercial spaceflight. With the recent share price fall, investors can now buy shares for a 15%+ discount to the $19.50 price of the capital raise.

The market opportunity is broadening 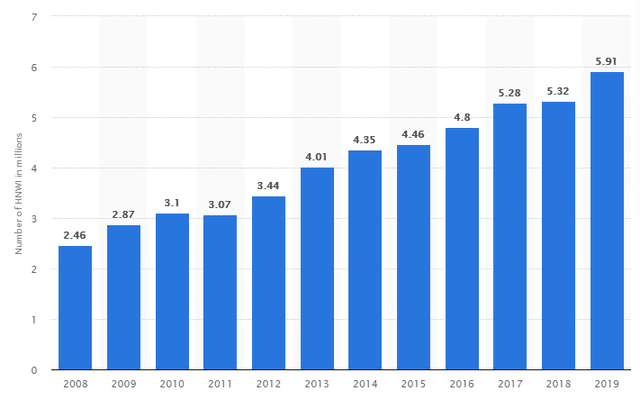 However, some may argue that many of these high net worth individuals will still not have the capacity to afford the cost of a ticket for a Virgin Galactic spaceflight. So, to remove many of these potential anomalies, I will look towards the subset of ‘ultra-high net worth’ individuals (UHNWI) that have a wealth of more than $30 million. These will be Virgin Galactic’s predominant focus as they can immediately afford a Virgin Galactic flight experience. As shown by MGM research, the number of the ultra-wealthy is actually expanding at an even faster rate than the high net worth individuals. In 2018, there were a total of 198,000 UHNWI individuals globally, and by 2023, the forecast suggests there will be another 40,000+. 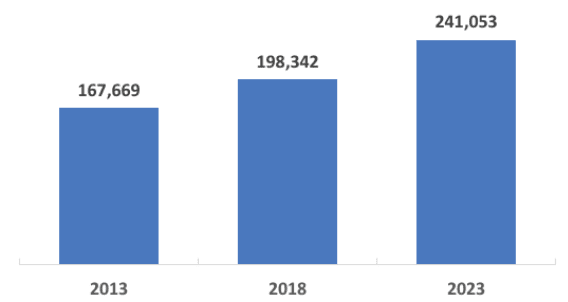 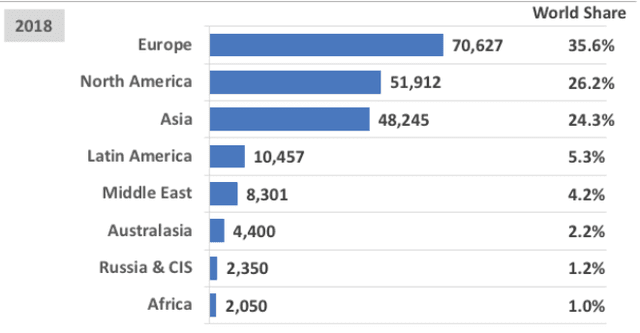 Whilst I largely have a near-term focus in my investment in Virgin Galactic, as I see the benefit in a shorter-term trade which builds on positive market sentiment, I do also see the long-term multi-bagger potential of the company. As Virgin Galactic has made significant headway towards commercial flight, the company has also looked towards efficiency and eventually to scaling up the availability of its offering to more people. This was highlighted in the company’s annual report where they detailed the work that had gone into making the potential future astronauts’ trips as smooth as possible:

We have worked diligently for over a decade to plan every aspect of the Future Astronaut’s journey to becoming an astronaut, drawing on a world-class team with extensive experience with human spaceflight, high-end customer experiences and reliable transportation system operations, and safety

Being the first mover will also play to Virgin Galactic’s future market position as they will have a greater amount of time to improve efficiency and hopefully deliver lower prices for potential future customers. Virgin Galactic’s ‘reusable’ flight systems are a key component to achieve this, with ‘White Knight Two’ the company’s launch vehicle expected to make thousands of flights to high altitude while launching spacecraft. Virgin Galactic is also preparing for an increase in demand by the end of 2023, with the company aiming to have five ‘SpaceShipTwo’ spacecraft in service by the end of 2023. The company is developing a future ‘airline-like’ operations plan which will create and deliver a highly efficient service.

Virgin Galactic has already started to work with Rolls-Royce (OTCPK:RYCEF), the leading UK aircraft engine manufacturer, to move closer to achieving this secondary market for its products.

There is no denying that Virgin Galactic is a high risk, high reward trade that offers both significant upside and significant downside potential. But I believe the company is worth a small position in one’s portfolio. Investors can see a position in several ways. One view could be that it’s a long term ‘long-shot trade’ playing on the huge potential that Virgin Galactic has to deliver significant shareholder value. The other view is to play on market sentiment where the first commercial space flight could result in a large boost in the company’s share price even without achieving profitability. I am holding my albeit small position.

If you enjoyed this article, make sure to hit the “Like” button, and if you want to see more coverage from me, then click on the “Follow” button at the top of the screen.

Disclosure: I am/we are long SPCE. I wrote this article myself, and it expresses my own opinions. I am not receiving compensation for it (other than from Seeking Alpha). I have no business relationship with any company whose stock is mentioned in this article.