The purpose of this article is to evaluate the Vanguard Financials ETF (NYSEARCA:VFH) as an investment option at its current market price. The Financials sector was an area I viewed positively as the recovery got underway, and that play has worked out reasonably well. However, looking ahead now, I see increased merit for caution. While VFH has a relatively cheap valuation and a solid income stream, there are headwinds on the horizon that counteract those attributes. For one, the low interest rate environment is hurting the sector’s profitability, as net interest income and margins are down across the board. Further, while banks have seen a rise in assets under management, the amount of level 3 assets are up sharply. These are assets that are notoriously difficult to value and may be exposing the major banks to more risk than it appears on the surface. Finally, with the major indices sitting near record high levels, I don’t think it will take much for stocks to correct more broadly. This puts the recent gains for funds like VFH at risk in the short term, in my view.

First, a little about VFH. The fund is managed by Vanguard and “seeks to track the performance of a benchmark index that measures the investment return of stocks in the financials sector”. The fund currently trades at $60.37/share and yields 2.82% annually. In May, I recommended VFH, as I saw some relative value within the sector. In hindsight, this was a decent call, as VFH performed well in the weeks that followed. However, now that more time has passed, the strength waned, and VFH has delivered a gain in line with the broader market:

As I looked ahead towards the end of 2020, I am reassessing all the funds and sectors I cover to see if I should alter my outlook from here. After review, I see little chance of VFH outperforming in the months ahead and also expect any positive returns to be more modest. Therefore, I am shifting my rating to “neutral”, and I will explain why in detail below.

To begin, I want to touch on a consistent theme for the Financials sector, which highlights why investors may want to remain long this investment. Specifically, this considers the relative valuation for Financials, which is markedly lower than the broader market. As economic headwinds, low interest rates, and concerns over regulatory scrutiny plague the sector, investors have been unwilling to bid up the premium to own the underlying stocks. The result has been the Financials sector has remained a value play for some time. In fact, Financials offer not just a relative value, but also a value in isolation. To illustrate, consider the P/E ratio for Financials is near the bottom of its historical average, as shown below:

On the surface, this makes Financials seem like a safer play than many corners of the market, so that is something to keep in mind, especially for value-oriented investors. This story plays out when we look at the price to own VFH compared to the S&P 500, as shown in the chart below:

Clearly, VFH offers a substantially lower buy-in price, and that could pique investor interest. However, I must emphasize that this does not mean that VFH is going to automatically rally. The sector has enjoyed a discounted valuation for quite some time, which means this has not acted as much of a catalyst for above-average gains over the past few years. Further, there are multiple headwinds facing the sector, which suggests the below-average valuation is partially justified. Those are the points I will discuss next, which lend support to my neutral outlook.

I will now shift to some of the reasons why Financials have not been able to rally much in 2020. A principal reason is low interest rates, which cripple a bank or lender’s ability to improve its net interest margin. Higher interest rates, on average, are a net win for financial institutions, because they are able to increase the spread between what they charge for loans and other services compared to deposits. By contrast, as rates fall, this margin tends to contract. Unfortunately, this is precisely what has been playing out so far in 2020. As the Covid-19 crisis forced the Fed (and other central banks) to lower interest rates, the major banks have seen their net interest margins drop markedly. This reality has been compounded by the fact that many large banks were forced into holding loans that originated through the Paycheck Protection Program, many of which carry interest rates of 1%. 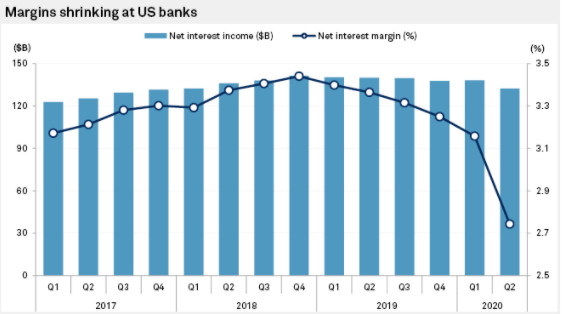 My takeaway here is clearly negative. As the net interest margin drops, lenders will feel a pinch to their net profitability. Of course, this figure could reverse if interest rates tick higher. But this is not something I see happening, especially before the election. This means for the next few quarters, these net interest margin figures will trend near these levels, supporting a cautious outlook for the Financials sector.

Banks’ Rise In Assets Comes With A Caveat

I noted in my May review how major banks, including the top holdings in VFH’s portfolio, such as JPMorgan Chase (JPM), Bank of America (BAC), and Citigroup (C), among others, had been seeing a rise in deposits and other assets. Many U.S. households are stashing their money in banks, likely due to Covid-19 concerns, leading to a sharp rise in the U.S. savings rate:

The result has been a rising level of assets at the major banks, which can be viewed positively. An increase in liquid assets helps put the banks in a stronger financial position to withstand market shocks, and it also improves their ability to take advantage of any investment or lending opportunities that present themselves. Capital requirements were designed to restrict the ability of financial institutions to recklessly lend, but as their assets rise, they have more flexibility to offer new loans while still maintaining federal capital adequacy requirements.

While on the surface this looks like a positive, if we drill down deeper into the numbers, we see that there are risks hiding beneath the surface. Yes, the rise in bank assets could very well work out in the bank’s favor, but that is not a guarantee. One red flag right now is that the rise in “level 3” assets on the major banks’ balance sheets has been growing, and that could suggest some volatility down the road if macroeconomic conditions deteriorate.

To understand why, I will give a brief overview of what these assets are. When banks, and other companies, record assets on their balance sheets, they categorize them as level 1, 2, or 3. The lower the level, the more liquid and therefore more easily valued the asset is. The level 3 assets are considered the least liquid, as well as the hardest to value. Essentially, the value of these assets can be quite subjective, as the institution is given some flexibility on how they are valued. Essentially, the bank is able to use certain assumptions or financial models to determine the stated value, which may or may not be what the asset will sell at, especially during times of financial distress. Common examples of level 3 assets would be mortgage-backed securities, private equity shares, derivatives, and distressed debt, among others.

So why is this relevant to VFH? Simply, the largest financial institutions in the U.S. and Europe are seeing a sharp uptick in level 3 assets in their possession. VFH holds some of the biggest names in banking, so this rise impacts the fund directly. Importantly, the increase is quite high on a historical level, so it is especially relevant right now, as shown below:

My point here is investors need to keep an eye on this going forward. If economic factors improve and delinquencies in corporate and household borrowing are manageable, then the rise in these assets is not much to worry about. In fact, they may actually improve profitability. But if macro conditions worsen, and we find out the banks’ models for valuing these assets was not very robust (think MBS valuations during the housing crisis), then this trend is sure to weigh on overall performance. At the very least, I will want to see this trend reverse a bit, even if conditions improve, before returning to a bullish rating on Financials as a whole.

My final point has a more optimistic tone and concerns the fund’s dividend. While VFH does not offer a “high” yield, it is noticeably higher than the broader market, and perhaps even more importantly, it has been growing. This was a metric I touched on during my last review, and the trend accelerated in Q2. While the market as a whole struggles with dividend cuts and suspensions, the Financials sector has held up reasonably well, with a notable exception of Wells Fargo & Co. (WFC). While WFC has felt tremendous pressure, it is the only company in VFH’s top holdings that has seen a dividend cut this year: 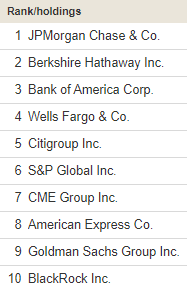 To get a sense of how the dividend looks relative to last year, I compiled the Q1 and Q2 distributions for both calendar years, with a comparison detailing the annual growth, as shown below:

My takeaway here from an income perspective is positive. VFH is offering a dividend above the market average and its growth has accelerated in the short term. While there are multiple reasons to be cautious on equities in general right now, we can take some comfort in VFH’s distribution stream.

VFH has seen a strong gain since my last article, but I expect the next few months to be a bit more challenging. While the relative valuation and dividend are attractive, the Financials sector continues to face macro challenges stemming from low interest rates, economic uncertainty, and a rise in level 3 assets on the books of the world’s biggest banks. Considering where equities currently sit, I’m not having much luck finding true value, and a cyclical sector like Financials does not fit my bill currently. Therefore, I believe a “neutral” rating is appropriate for VFH and suggest investors carefully consider any new entry points at this time.

© Reuters. FILE PHOTO: Windmills tower over a field in near the city of Waremme By Nina Chestney LONDON (Reuters) – The world must combine COVID-19 recovery packages with massive investments in renewable energy and […]