About six months ago, I explored why small-cap value stocks had been underperforming the broad market not only during the COVID-19 crisis but also for the past many years. Since then, the Vanguard Small-Cap Value ETF (VBR) climbed about 15%, about five percentage points short of the S&P 500 (SPY).

Back in April, I was reticent about small-cap value, choosing not to make too bullish a statement about this group of stocks in the earlier innings of a global pandemic and recession. But today, I am feeling more confident about a revival in this corner of the market.

History, at least, seems to support my optimism.

A quick word on VBR

Currently, VBR holds nearly one-third of its assets in the financials and almost one-fourth in the industrials sectors (see pie chart below). Among the top ten holdings, Peloton (PTON) at 80 bps and Booz Allen Hamilton (BAH) at 60 bps of the total portfolio are perhaps the two best-known stocks.

The highly-diversified, $28.5 billion ETF charges a small management fee of 0.07% per year and is very liquid, trading nearly $50 million worth of shares per day in the market. 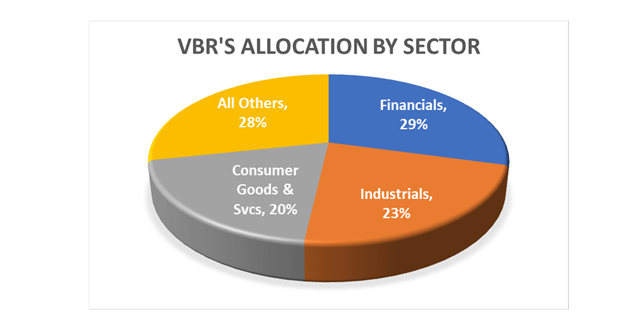 Generally speaking, both the value and small-cap factors tend to perform better during periods of economic recovery and stability. This is probably true because smaller, procyclical companies valued more cheaply (think of specialty consumer banks, regional airlines or small manufacturers) benefit the most from the systematic boost of a thriving economy.

The graph below helps to illustrate the idea. For the past 50 years or so, large-cap growth (portfolio 2, in red) did best relative to small-cap value (portfolio 1, in blue) during or just ahead of some of the less favorable economic environments: the oil crisis of the early-to-mid 1970s and the COVID-19 pandemic – it also held up better in the Great Recession of 2008-2009, but this is a bit harder to see in the chart. The opposite was true during the “roaring” 1980s-1990s and after the dot-com bubble.

One “gut feel” thesis might be that, following the worst year in the economy since 2008 (or possibly much longer), small-cap value should finally find its way north once again as the economy eventually recovers. Of course, the idea of imminent strength in small-cap value has been tossed around for the past few years, but the theory has stubbornly failed to play out as expected.

Yet, once I look at the historical data, I can’t help but think that a reversion to the mean favoring small-cap value is very likely to happen this time. To be clear, benefiting from this possible market move requires patience and a fairly long time horizon of at least three (lower conviction), ideally five years (higher conviction).

The following scatter plot depicts the relationship between prior and forward five-year returns, in annualized terms, of a portfolio that is long small-cap value and short large-cap growth since the 1970s (rebalanced annually). 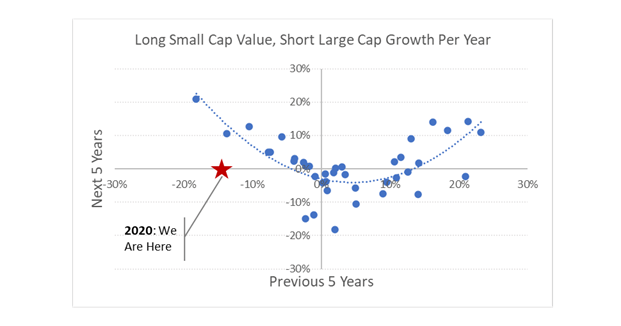 My observations and interpretation of the historical relationship are as follows:

Predicting the future is pretty much impossible. But drawing conclusions based on observation of long-term historical market behavior can help investors to set expectations for what comes next. From this perspective, I find it highly likely that small-cap value, represented by an ETF like VBR, will perform better than large-cap growth over the next five years.

Sure, “this time can be different”. Maybe the dynamic between small-cap value and large-cap growth will change forever in favor of the latter, and cycles of outperformance between the two groups of stocks will cease to exist. But I am not ready to make such a bold bet. While “all or nothing” is rarely a good investment strategy, I would consider allocating part of a stock portfolio to small-cap value today.

“Thinking outside the box” is what I try to do everyday alongside my Storm-Resistant Growth (or SRG) premium community on Seeking Alpha. Since 2017, I have been working diligently to generate market-like returns with lower risk through multi-asset class diversification. To become a member of this community and further explore the investment opportunities, click here to take advantage of the 14-day free trial today.

Israel stocks higher at close of trade; TA 35 up 1.44% Investing.com – Israel stocks were higher after the close on Thursday, as gains in the , and sectors led shares higher. At the close […]

Canadian Dollar Talking Points USD/CAD trades to a fresh monthly high (1.3390) as the US Dollar appreciates on the back of waning risk appetite, and key market trends may continue to influence the exchange rate […]