Cohen & Steers Infrastructure Fund’s (UTF) share price continues to trade near parity of the NAV per share. This makes it hard to come out and say this fund is worth buying today. However, one could still do a lot worse than buying a long-term winning closed-end fund. Even while UTF is at a slight premium, it can be a rewarding long-term hold.

The utility/infrastructure space remains relatively meager for the year. If using the Utilities Select Sector SPDR ETF (XLU), on a YTD basis we are looking at a return of -1.83%. This has been in the bottom half of sector results based on the other SPDR ETFs.

Of course, that means now could be one of the better times to be buying when the sector is underperforming the others. That being said, UTF also has a focus on global positions and not just the U.S. market. The fund also invests a small amount in preferred and bonds. The end result is that something like XLU not being a perfect barometer or benchmark of performance. Still, using it as a rough gauge can work.

UTF’s objective is “total return, with an emphasis on income through investment in securities issued by infrastructure companies.” They define infrastructure companies as those that; “typically provide the physical framework that society requires to function on a daily basis and are defined as utilities, pipelines, toll roads, airports, railroads, marine ports and telecommunications companies.”

These are essential ‘real assets’ that are necessary for individuals to continue to live and function.

UTF is a sizeable fund at roughly $3 billion in total managed assets. Though, the fund does utilize leverage that can increase risks and volatility. This may not be appropriate for every investor – as we have seen what leverage can do in a panic. Currently, they reported 28.55% of the fund being levered.

UTF charges a fairly typical 1.33% expense ratio that is around what other global/hybrid funds charge. When including the interest expense, this climbs to 2.53%. 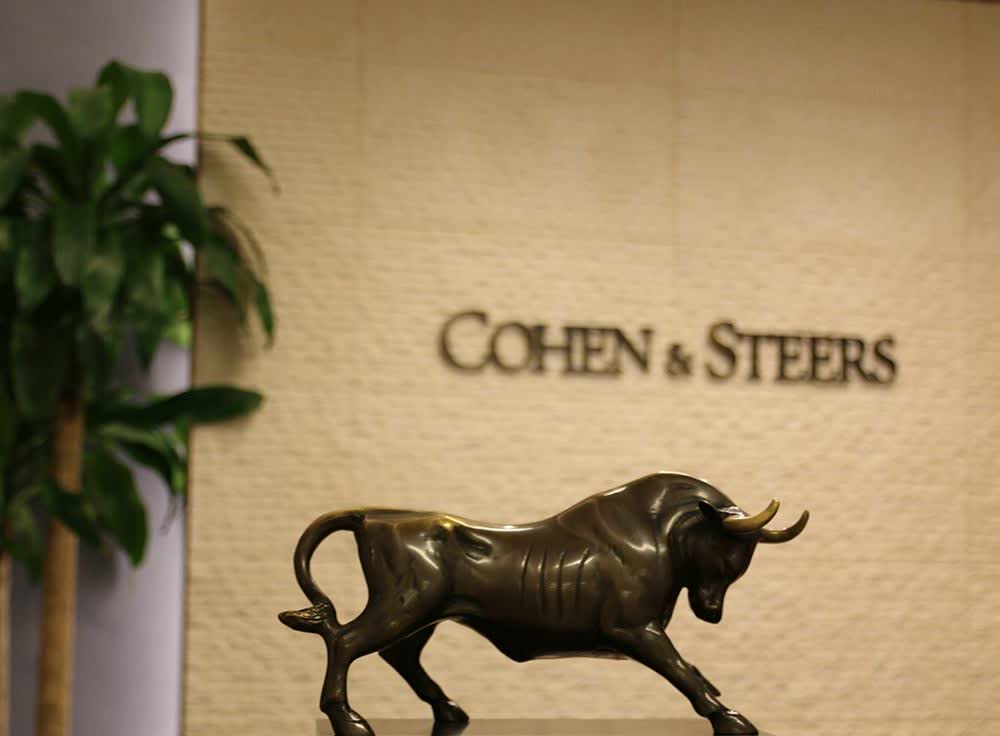 Performance – Down But Not Out

UTF on a shorter-term basis certainly isn’t anything to get excited about. On a YTD basis, the fund’s performance is down on a share and NAV basis. That being said, the fund has made an exceptional run since bottoming in March. 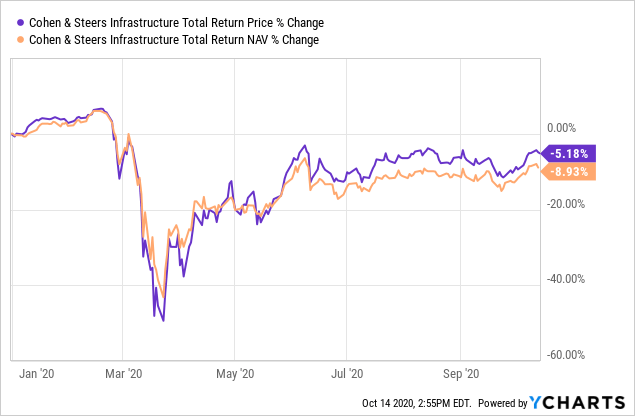 That being said, the fund’s longer-term record is more impressive. Netting shareholders double-digit returns for the past 10-year annualized period, as of the end of September.

While that is impressive, as we can see, the share price has outperformed the NAV. That results in the fund losing its once weighty discount. The fund last closed at a slim premium of 0.93%. The last 1-year average has given us a discount level of 3.90%. Additionally, that puts the fund’s 1-year z-score positive at 1.30. Going back even further, the fund’s average 5-year discount is 7.95%. 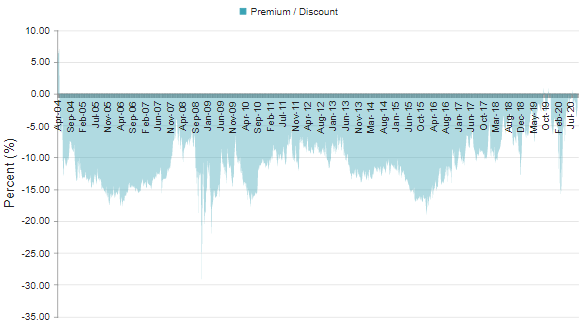 That does mean I would be lying if I said now is the best time to add to this name, as it certainly is not the best time. What does make this fund attractive is the fact that even considering the valuation, over the longer term it can still post some healthy returns for investors. As investors are clamoring for income in a world where 10-year yields were hitting record lows, then the potential for dividend income and capital appreciation is appealing.

Of course, investing in a mostly equity fund does increase risks for investors as well. Meaning that it isn’t right for everyone.

Distribution – NII Drops A Bit But Can Rely On Capital Gains

Mentioning being mostly an equity fund, that can bring us to the fund’s enticing 8.17% yield. For the period ending June 30th, 2020, net investment income did drop a bit if we were to annualize out the figure. However, the fund’s significant exposure to equities means that the fund can rely on capital gains. For UTF, this happens to be quite a healthy amount.

Due to the fund’s slight premium, the NAV distribution rate of the fund comes out to 8.24%.

The fund did have a rough patch where they went from a monthly to a quarterly distribution. This has since been changed back to monthly. This would have put pressure on the fund with income investors not appreciating the change. However, it did also result in positive long-term effects as the fund was able to better bounce back from the GFC. This is by chance the reason why this fund can boast of having a share and NAV price higher now than at inception. This only includes a shortlist of funds being able to say the same. As we know, the majority of CEFs pay out all their ‘earnings.’ Thus, it generally means that over time the fund will decline as we go through market crashes. 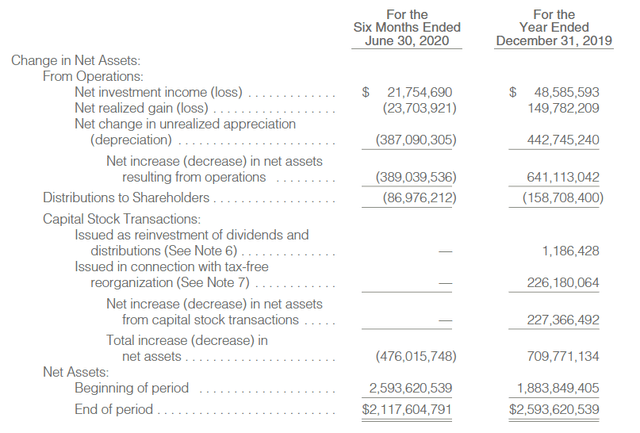 Here we can see that NII coverage came to around 25%. This can be compared to last year’s NII coverage of almost 31%. The fund did also merge with another fund, so, that will throw the numbers here off a bit as well going forward. This left UTF as the surviving fund and adopted UTF’s investment policy.

Even as the year has been rough on UTF, and many other areas of the market, the fund still had a sizeable amount of unrealized gains at the end of June. This has only increased more since that time. This is exactly where a fund like UTF can continue paying out these higher than typical distribution rates.

One of my favorite things about investing in CEFs is the high income. That high income requires strong companies, these strong companies tend to have a strong cash-flow and resilient business. The stability in any type of economic environment is critical. They typically have the opportunity to raise dividends over time as well. This ultimately benefits UTF as the underlying utility/infrastructure companies provide a diversified group of these strong cash-flow companies. In a black swan event like COVID-19, they are still hurting – but it isn’t nearly as bad as other areas of the economy as earnings roll in. Additionally, refer back up to the YTD performances of sectors, that tells us right there that one could be far worse off.

Since our last coverage, UTF did change up its portfolio just a bit. This isn’t surprising as over the last 6-months they reported a turnover of 30%. Though preferred and corporate bond holdings remained exactly the same; both the asset types came in at 8%, and that is where they both remain allocated.

The geographic allocations also remain relatively similar. The U.S. allocation was previously at 60%. “Other” was 10% and has now gone to 13%. Also increasing exposure was Canada at 9% from 7% and Australia at 6% from 5%. Italy has moved off this shortlist, and France has replaced it. Though the percentages after the first few largest allocations are minimal.

To explain this, it certainly wasn’t just by the underlying market moves. In fact, AMT’s share price return was down for the last 6-months. At the same time, NEE and CII were up – NEE up significantly. Thus, profits were likely being taken in the two largest positions is likely playing a role. 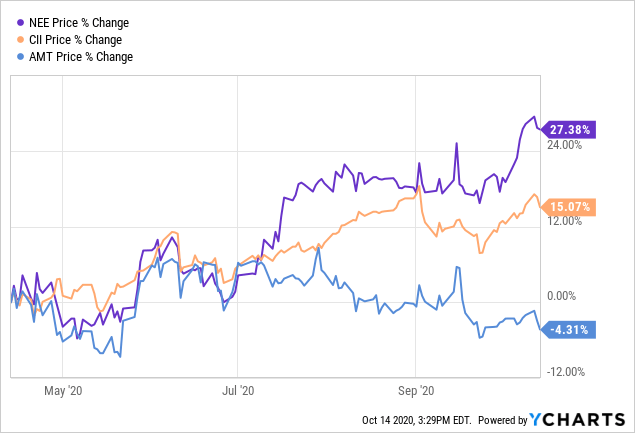 What is interesting among these is that CNI and UNP have just moved up the list due to stock performance, at least this is partially responsible for the allocation changes. This is quite interesting as one might have expected just the opposite earlier this year as railroad/transport stocks tend to flow with the economy. As we know, the economy has taken quite a hit earlier this year on the back of pandemic lockdowns. It has even been highlighted that things aren’t all back to normal, “rail volumes ties to the industrial economy aren’t back to prior peaks…” Though, it is also highlighted that “rail volumes tied to consumer spending are back above pre-pandemic levels…” 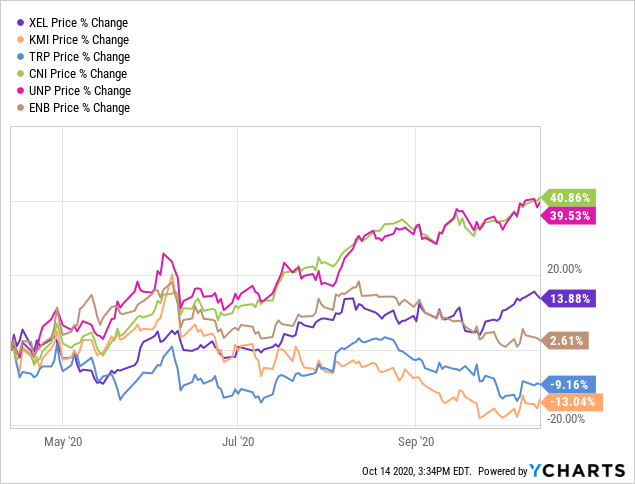 This might just be showing us that the expectation for a strong economy is still on track. Additionally, the stimulus talks continue. Though being at pretty much a standstill, the market is still optimistic that something will eventually come along. That means stocks are likely pricing even more money being thrown into the economy before this whole crisis is over.

UTF remains one of my larger positions. That being said, it isn’t a screaming deal to buy right now with a minimal premium. Though I believe this one is worth watching if one believes market volatility is right around the corner. It is even attractive for investors with a longer-term outlook. One could benefit by buying now – collecting the attractive monthly distribution while waiting for the utility and infrastructure space to recover to its pre-crisis levels.

Typically, the utility/infrastructure space does provide more stability for an investor. As the market sold off earlier this year, everything was hit the same. Everything also rebounded differently as well. Utility stock performances remain basically flat on a YTD basis, while earnings from the space still remain intact or even better than anticipated.

Disclosure: I am/we are long UTF, NEE. I wrote this article myself, and it expresses my own opinions. I am not receiving compensation for it (other than from Seeking Alpha). I have no business relationship with any company whose stock is mentioned in this article.

Additional disclosure: This article was originally published to members of the CEF/ETF Income Laboratory on October 14th, 2020.