Trade all the major global economic data live and interactive at the DailyFX Webinars. We’d love to have you along.

US Dollar and ASEAN FX Recap

After a couple of disappointing weeks for the US Dollar, the currency saw a comeback which resulted in the best week for DXY since early March. Yet, this wasn’t associated with a less-dovish shift in Federal Reserve monetary policy expectations, as indicated by recent government bond auctions. This is even despite softer-than-expected US CPI data, more on these developments later.

This meant a tough week for its ASEAN counterparts, most notably the Singapore Dollar taking a look at the chart below. Expanding to “ASEAN Plus Three”, the Indian Rupee also underperformed after briefly rallying following in-line local CPI data which rose to 3.05% y/y in May from 2.99% prior. The Reserve Bank of India is in an easing cycle as it seeks to support prices, cutting rates three times this year so far.

It is arguably next week’s Fed rate decision that carries the most scope for volatility in the US Dollar and thus knock-on impact for its ASEAN counterparts. The markets are anticipating a rate hold, but Fed funds futures are indicating a greater than 85% chance of a cut at the subsequent meeting in July and two by the end of 2019. Yet, the central bank’s forecasts indicate no changes this year with maybe one hike in 2020.

As such, absent a significant dovish shift in rhetoric from Chair Jerome Powell, the US Dollar could be poised to benefit from two scenarios. The first is a less-dovish Fed. The second is risk aversion if equities lose upside momentum that has been fueled by bets of loser credit conditions. If there is a premium for liquidity, the Greenback is likely to benefit given such high levels of confidence in a dovish central bank.

US economic outcomes have still been tending to disappoint relative to economists’ expectations, which supports the argument of lower rates. Aside from CPI last week and the jobs report before that, better-than-expected US retail sales and industrial production bolstered the US Dollar this past Friday. But in the background, US-China trade wars are a risk to the economy pointed out by central bank members.

An outcome that may be possible is one which we saw with the ECB at their latest interest rate announcement. While policymakers shifted the outlook for holding rates further out, it fell short of supporting near-term rate cut bets. Thus, EURUSD rallied. A similar outcome from the Fed may see gains in USDINDR, USDMYR and USDSGD.

Fed Funds Futures Versus S&P 500 and US Dollar 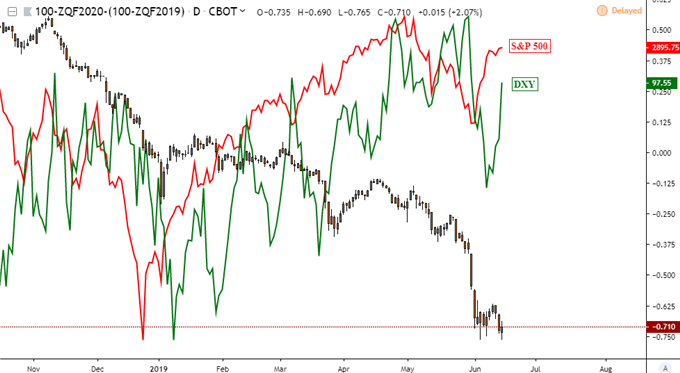 Meanwhile, the Indonesian Rupiah will also be eyeing its own associated central bank. On Thursday, the Bank of Indonesia is anticipated to maintain the 7-Day Reverse Repo Rate unchanged at 6.00%. Yet, the focus for USD/IDR may not necessarily be about their forward guidance for interest rates, but rather about the currency itself.

That is because the central bank is closely guarding the Rupiah in intervention, and this can be seen on the chart below. The central bank has been spending foreign exchange reserves as of late to help stem a selloff in IDR. Their target for the Rupiah is 14,000 – 14,400 this year and then 13,900 – 14,300 per Dollar, mentioned last week. As such, it may dial up rhetoric to perform this action and prevent a selloff. 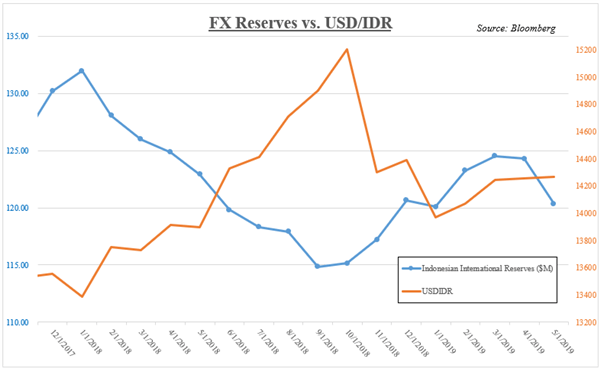 On the same day, USDPHP will also be keeping an eye out for the Bangko Sentral ng Pilipinas (BSP). At the time of this writing, a little over 50% of Bloomberg respondents envision the central bank cutting the overnight borrowing rate from 4.50% to 4.25%. This makes for an interesting outcome as around half of traders may find themselves at the wrong end of the outcome, and this is an ingredient for volatility.

Governor Benjamin Diokno said that a rate cut was inevitable despite a better-than-expected CPI report in May, hinting that the uptick is not a trend. He also mentioned that the path is data-dependent. Crude oil, a key import, is down over 20% from the peak in April and this may offer scope to ease further. The central bank is also looking at cuts in reserve requirement ratios. As such, risks seem tilted lower for PHP.

jejim/iStock Editorial via Getty Images Synopsis’s (NASDAQ:SNPS) stock has been through many ups and downs since the last time I covered it on January 28 and has lost 17.6% since the beginning of 2022. During […]