The University of Michigan released preliminary figures for January consumer sentiment showing consumers remain upbeat about the state of the economy. USDJPY rose as the headline figure crossed the wires at 100.9, beating expectations of 99.5 and rising over last months read.

Consumers are showing optimism for the future of the economy, with the expectations index rising to 92.6, near historical highs. The figure was bolstered by personal finances with net gains in household wealth rising to the best level since the 1960s. 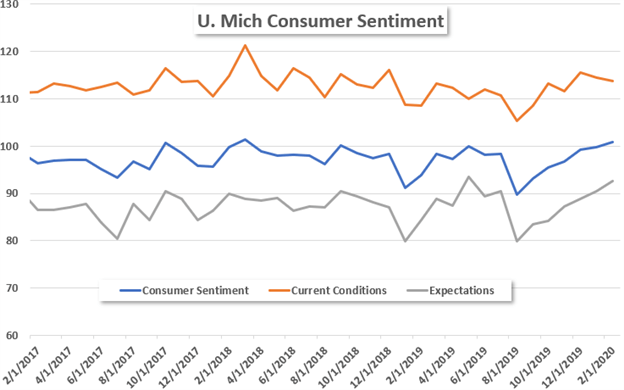 Also released this morning was retail sales data for last month. January’s figure came across the wires at 0.3 percent, matching expectations. However, clothing retailers saw the biggest drop in nearly a decade, which could inject worry about a slowdown in discretionary spending. The print also showed that last month’s figure was not as strong as initially expected, being revised down a percentage point to 0.2 percent.

hapabapa Fiserv (NASDAQ:FISV) is often seen as a slow-growth business with a significant share of legacy services and challenged profitability. Since I have been following the stock, investor sentiment has been mostly neutral to slightly […]