The Institute for Supply Management released their monthly report on the US non-manufacturing/services sector Wednesday morning with the headline figure for January crossing the wires with a reading of 55.5, beating expectations of 55.1. The US Dollar initially shot higher as the report released but failed to follow through on momentum from a solid ADP jobs report released earlier today.

Chart Created by @FxWestwater with TradingView

Looking into the report, the services index saw new orders grow at a faster rate for January with the series index rising to 56.2 from 55.3. Employment continued to grow, but at a slower rate, dropping to 53.1 from 54.8. Another notable highlight from the report is strength in business activity, marking its 126th month of consecutive growth and rising to it’s highest level since last February. 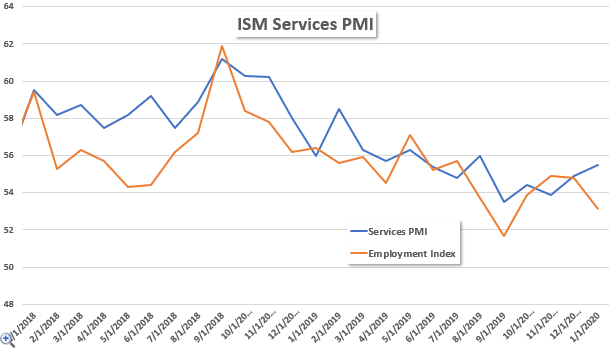 The Coronavirus, which recently spurred volatility across markets, didn’t appear to have much impact on the report. However, one survey participant did mention that they were monitoring impacts on medical supplies.

Labor markets have shown robust strength in recent years and markets will now focus on Friday’s Non-farm payrolls report, expected to show the US economy adding 162k jobs for January. A close eye will also be on manufacturing employment, as the slump in the factory sector is expected to continue, even as manufacturing PMI rebounded for January.