USD/JPY extends the advance from the start of the week to largely track the rise in longer-dated Treasury yields, and the exchange rate may stage another attempt to break out of the yearly opening range as the US Retail Sales report is anticipated to show a sharp rebound in household spending.

USD/JPY retraces the decline from the monthly high (116.34) as Federal Reserve officials show a greater willingness to normalize monetary policy sooner rather than later, and expectations for higher US interest rates may generate another run at the January high (116.35) as the Bank of Japan (BoJ) remains in no rush to switch gears.

As a result, the update to the US Retail Sales report may generate a bullish reaction in USD/JPY as private-sector consumption is anticipated to increase 2.0% in January, and a positive development may push the Federal Open Market Committee (FOMC) to further adjust the forward guidance for monetary policy as the central bank acknowledges that “the economy no longer needs sustained high levels of monetary policy support.”

In turn, the divergence paths between the FOMC and BoJ may keep USD/JPY afloat as the Fed looks to winddown its balance sheet in 2022, and it remains to be seen if Chairman Jerome Powell and Co. will project a steeper path for the Fed Funds rate as the central bank is slated to release the updated Summary of Economic Projections (SEP) at its next interest rate decision on March 16.

Until then, USD/JPY may stage further attempts to break out of the yearly opening range amid the rise in longer-dated Treasury yields, and a further rise in the exchange rate may fuel the tilt in retail sentiment like the behavior seen during the previous year. 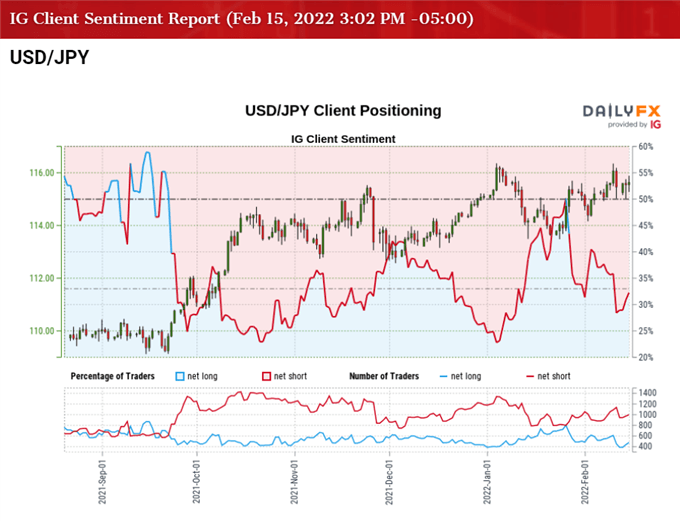 The IG Client Sentiment report shows only 33.35% of traders are currently net-long USD/JPY, with the ratio of traders short to long standing at 2.00 to 1.

With that said, USD/JPY may continue to retrace the decline from the monthly high (116.34) as the Retail Sales report is expected to instill an improved outlook for growth, and the exchange rate may stage another run at the January high (116.35) amid the rise in US yields. 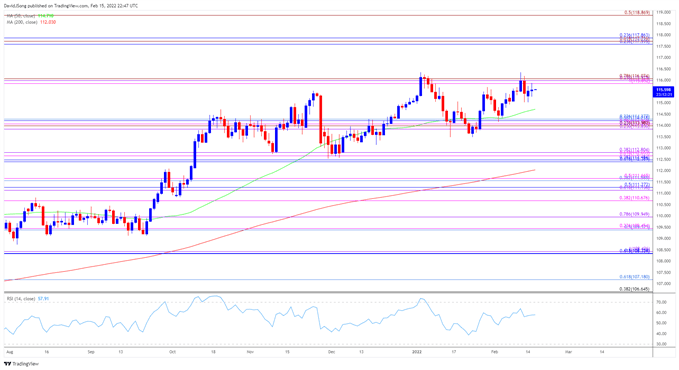