The Canadian Dollar outperformed against its major counterparts on Friday, extending the rally that prolonged throughout the week. Its rise occurred amid a pickup in crude oil prices, a key source of revenue for Canada. That can imply knock-on effects which could translate into monetary policy expectations.

Sentiment-linked crude prices were elevated as the markets continued shrugging off concerns about the impact of coronavirus on global growth. This follows China revising the method for counting cases, resulting in a strong surge in reports this past week. A swelling in the Fed’s balance sheet added liquidity into markets.

The S&P 500 closed 0.18% to the upside on Friday after reports crossed the wires that the White House is looking into tax incentives for households to purchase stocks. The fate of this, alongside middle-class tax cuts, arguably leans on the outcome of this year’s presidential election.

The Euro underperformed, closing at its lowest point against the US Dollar since April 2017. The single currency has been under pressure amid slowing European growth expectations. Preliminary figures showed Eurozone fourth-quarter GDP unexpectedly slowing to 0.9% y/y versus 1.0% anticipated.

After market close Friday, the United States Treasury Representative announced that the country will raise levies on European-imported aircraft to 15% from 10%. This follows a green light from the WTO last year that ruled in favor of the United States imposing about $7.5b in tariffs against the European Union.

This may translate into a cautiously pessimistic mood as the new week gets rolling. Wall Street is offline Monday for the Presidents’ Day holiday, lowering levels of liquidity. If Asia Pacific equities trade lower, the anti-risk Japanese Yen may gain at the expense of the sentiment-linked Australian Dollar.

As expected, USD/CAD turned lower following the emergence of bearish technical signals. Prices took out rising support from late January and have since seen downside follow-through. That places the focus on immediate support at 1.3208. 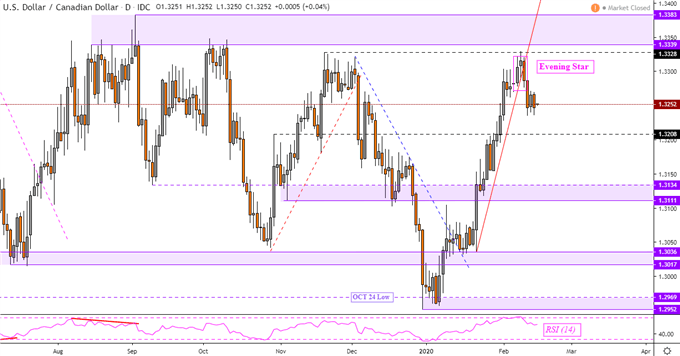 NoDerog/iStock Unreleased via Getty Images In my book, I explain: “On a long-term, total-return basis, (real estate investment trusts) have been quite competitive with the S&P 500. But their investors should expect only moderate capital […]