The US Dollar had a mixed week against its major counterparts while seeing cautious upside progress against some of its ASEAN counterparts. The Singapore Dollar fared the worst, as expected, in the aftermath of dovish commentary from the Monetary Authority of Singapore. Against the Philippine Peso, the Greenback underperformed but USD/PHP largely remained in its persistent consolidation mode.

The Peso could thank a sovereign credit rating upgrade to positive from stable via Fitch. The Malaysian Ringgit weakened following worse-than-expected GDP data, but ended the week close to little changed. What was perhaps the most surprising is why USD/SGD, USD/MYR, USD/IDR and USD/PHP failed to fully capitalize on another week of upbeat market mood. These tend to inversely follow sentiment.

What is the road ahead for the US Dollar? 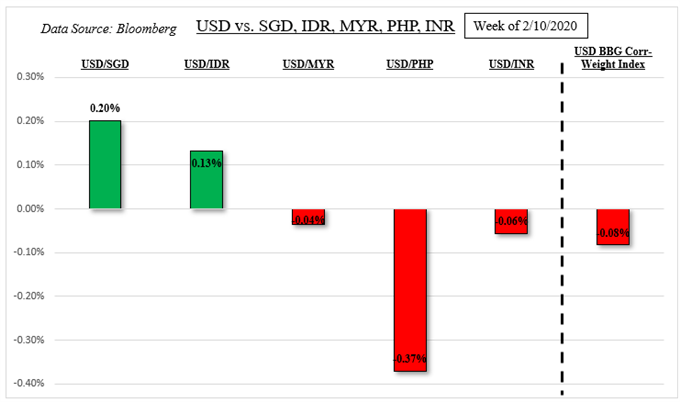 Financial markets largely brushed off a sudden surge in coronavirus cases after China revised the method of counting total reports. The world’s second-largest economy is a key trading partner for the ASEAN nations, and its economy is expected to slow. Singapore reported a 25-30% decline in tourists this year due to concerns about the Wuhan virus.

In fact, the US Dollar has generally been rising this month despite gains in the MSCI Emerging Markets Index (EEM). Its ascent appears to be supported by aggressive declines in the Euro, the world’s second-most-liquid currency next to the Dollar. Around the time when the EEM started rising, the Euro began depreciating against a basked of its major counterparts. That may be what is keeping the haven-linked Greenback elevated. 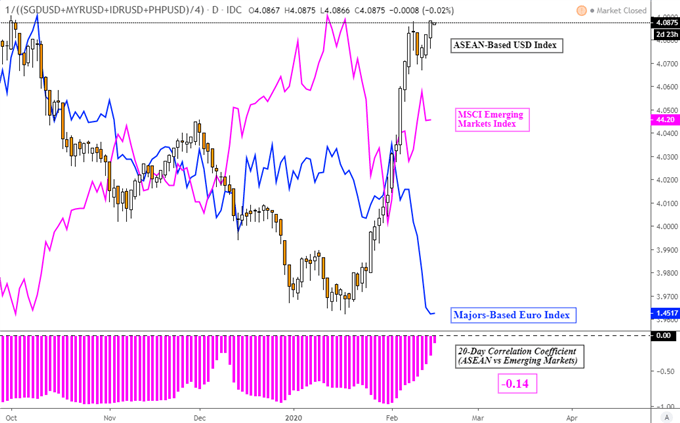 Focusing on regional event risk for ASEAN currencies, Tuesday will bring Singapore’s fiscal 2020 budget statement. The country’s budget deficit is expected to rise, indicating an expansionary policy. This comes despite the US-China “phase-one” trade deal and the outbreak of the coronavirus. A larger-than-expected deficit may undermine the case for MAS dovishness, perhaps boosting the Singapore Dollar.

On Thursday, the Bank of Indonesia will deliver its interest rate announcement. According to Bloomberg, odds of a 25-bp rate cut are just above 50% which would leave around half of traders on the wrong end of the outcome. That is a natural ingredient for potential volatility in the Indonesian Rupiah and USD/IDR. Friday will bring Malaysia’s latest CPI report where inflation is expected to clock in at 1.8% y/y in January.

Fed Chair Jerome Powell stressed this past week that the current policy stance remains appropriate. This is in stark contrast with market expectations which are fully baking in expectations of one 25-bp rate cut by the end of this year. Odds of a further reduction are around 50%. If this week’s FOMC meeting minutes uphold a neutral bias, that may fuel risk aversion and send the US Dollar higher.

Keep in mind that the central bank reiterated on its plan to slowly trim repo operations in the weeks ahead which would gradually reduce liquidity. That is another fundamental risk for equities and if growth in the balance sheet slows, we may see USD/SGD, USD/IDR, USD/PHP and USD/MYR aim higher. U.S. data has also been tending to outperform relative to economists’ expectations. More of the same may boost the USD.